In 1812, after the French army suffered a humiliating defeat in Russia, Napoleon Bonaparte retreated them back to France through knee-deep snow in a harsh Russian winter. While Napoleon lost most of his troops, he didn’t lose his hoard of gold, jewels and other treasure looted from Russia. Most theories suggest that he buried it during the retreat, with the most likely place being at the bottom of Lake Semlevskaya in Western Russia. However, the gold has never been found, despite searches by the French, the Russians and plenty of unaffiliated treasure hunters. Now, a Russian historian proposes a new theory that the reason it hasn’t been found is that everyone is looking in the wrong place (duh) and Napoleon’s lost gold is actually hidden in an elaborate protected enclosure at the bottom of a different lake. Before you pack your winter snorkeling gear and shovel and book a flight to Russia, check out his evidence. 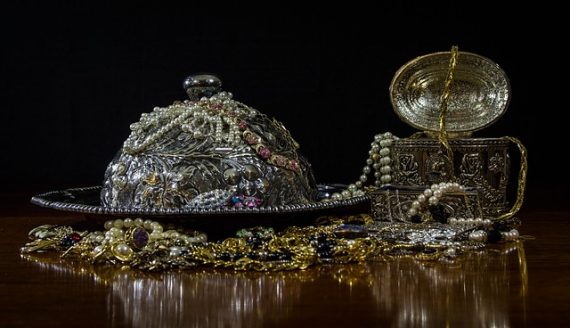 In an article published in Rabochy Put, historian Viacheslav Ryzhkov lays out his timeline and physical evidence supporting his theory that the burial in Lake Semlevskaya was an elaborate decoy by Napoleon to draw attention away from his equally-elaborate actual burial of the treasures at the bottom of Lake Bolshaya Rutavech, near the town of Rudnya on Russia’s western border with Belarus. And “elaborate” it was, according to Ryzhkov. He claims the real Napoleon (a double was sent to Lake Semlevsjaya) had some of the treasure melted into ingots before loading it into 400 wagons manned by 500 cavalry troops and 250 members of the elite Old Guard.

“Napoleon did not throw jewels in barrels into the lake, it would be too simple. He ordered to hide them, buried at the bottom of the lake under the water castle."

Ryzhkov claims Napoleon supervised the damming and draining of the lake so the troops could build a platform 50 meters (164 feet) from the shore to hold the treasures, then covered it with a thick layer of dirt and refilled the lake. That underwater crypt kept it hidden for two centuries from everyone … except Ryzhkov.

“And it should be noted that the chemical analysis of water from Lake Bolshaya Rutavech discovered silver ions in concentrations higher than the natural level. Water analysis was carried out for use in a concrete goods plant in 1989”

He believes the dirt mound has eroded, exposing some of the precious metals to ionization, which a 1989 water study detected … but only he connected the dots to Napoleon’s lost treasure.

“In my opinion, it is possible to extract the treasure from the mound at the bottom of the lake with the assistance of appropriate equipment and specialists. Preliminary drilling should be performed with analysis of the chemical composition of cores.”

While the ionization theory is certainly believable, the decoy-and-alternate-burials is less plausible. A 400-wagon caravan would be miles long and the damming and undamming of Lake Bolshaya Rutavech would be a monumental effort, especially for cold and exhausted soldiers retreating from embarrassing defeats … not to mention that such a huge effort would hardly go unnoticed by Russian locals.

Despite this, Ryzhkov knows the power of greed. He says he doesn’t want the treasures for himself – he thinks they should be returned to the Russian churches they were looted from – but he believes they would lure people with the proper diving and treasure hunting equipment to locate and recover the gold. What they did with it after that is no longer his concern … his theory will have been proven and a 200-year-old mystery solved.

Will it? Have you packed your flannel-lined diving suit yet?