Horror Movie to Be Filmed on the Haunted Queen Mary

Budgets for producing Hollywood movies these days typically run in the tens to hundreds of millions of dollars. Would you invest that kind of money in a film that was being shot in one of the most haunted places in the world? What could possibly go wrong? We’ll soon find out. The Hollywood Reporter announced that a major motion picture will be filmed on the Queen Mary – the cruise ship-turned-luxury-hotel now docked in Long Beach, California, and considered by many to be haunted in numerous locations … some of which will undoubtedly be used as sets. Haven’t they heard of CGI? 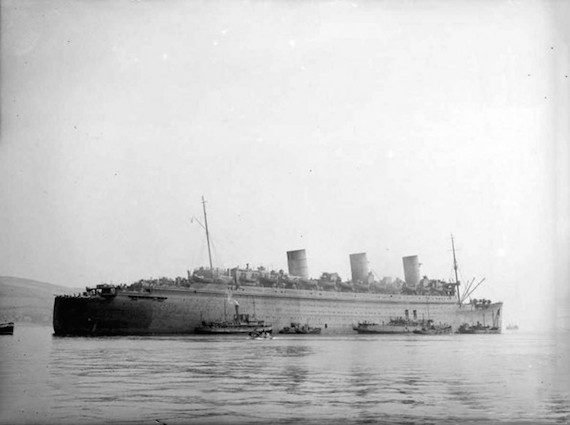 Apparently, the script has been languishing in a drawer for years while a suitable director was found. That person was selected this week – Gary Shore, the director of the 2014 fantasy horror movie Dracula Untold. That film made $217 million worldwide despite mixed reviews, so Shore should be a good captain to put at the helm of The Queen Mary pic. One of the producers is Brett Tomberlin, who produced the 2018 supernatural horror film Winchester starring Helen Mirren as Sarah Winchester, the real widow of the founder of the firearms company of the same name, who built and lived in the real Winchester Mystery House in San Jose that is said to be haunted by the ghosts of victims of the famous rifles “that won the West.” Shot on location, there don’t appear to have been any ghostly encounters during that shoot, thus giving Tomberlin the courage to try it again. Could this be a mistake?

“The upcoming film will center around photographers Erin and Patrick, who are brought aboard the vessel with their young son Lukas and unleash a series of events that entwines their family with the ship's dark past. According to The Queen Mary's synopsis, as the terror unfolds around the family they begin to realize there is more to this sumptuous ocean liner than meets the eye: its remarkable legacy masking violent secrets. As Erin and Patrick uncover the haunted layers that the vast ship contains, it becomes increasingly clear that there is only one way out for them — to go even deeper.”

Its remarkable legacy DOES mask some violent secrets. It was converted for military use during World War II (when it was presciently nicknamed the Grey Ghost) and is said to be haunted by the ghosts of an escort ship it hit. Restored back to a luxury liner, there are tales of the ghost of a crewman who was crushed by a door, passengers who drowned in the First Class pool, passengers just wandering the halls and a possible murder victim haunting the infamous Stateroom B340 where faucets turn on by themselves, sheets fly off the beds and carpets are being ripped up. That doesn’t seem to stop people from wanting to stay in the room and the owners of the hotel have accommodated them.

Will shooting The Queen Mary onboard the haunted Queen Mary jinx the production? There were alleged haunting circumstances associated with the sets of the Poltergeist series, The Omen, The Amityville Horror and The Exorcist. Why take the risk?

Even worse, why have to worry about a ghost popping up in the film and then suing for a percentage?