It’s known as the British Roswell. It has been studied by the British government, UFO experts, military investigators, conspiracy theorists and reality TV shows and written about in dozens of books and on hundreds of magazines and websites. It’s best known as the 1980 Rendlesham Forest Incident and has been considered “unexplained” … until possibly now. An anonymous tip from an alleged insider to a British UFO investigator has led to a stunning revelation that the Rendelsham Forest Incident may have actually been an elaborate prank performed by the Special Air Service (SAS) of the British Army on US Air Force personnel stationed at two former RAF bases nearby as revenge for alleged mistreatment by the US military. Is any of this true? Will books have to be rewritten?

“They called us aliens! Right, we’ll show them what aliens really look like!”

If this gets turned into a movie, that should be the opening line ... with a British accent. Dr. David Clarke, a lecturer at Sheffield Hallam University and recognized UFO ‘expert’ for Britain’s Ministry of Defence and the media, says that’s what British special forces soldiers said after their alleged experience with the US Air Force. Clarke reveals in a detailed article on his website that he received this info over three years ago from a person claiming to be an SAS insider who told him: “(It’s) about time that the truth is revealed.” 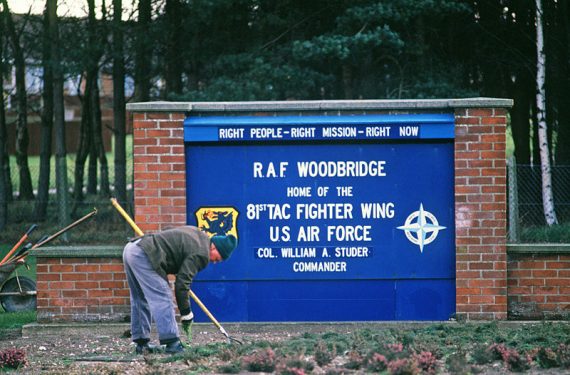 According to the insider, SAS soldiers secretly parachuted into RAF Woodbridge on an August 1980 night to test the US security at the site. Radar detected the paratroopers despite their black parachutes and the soldiers were apprehended, interrogated for 18 hours and allegedly beaten up. During the entire ordeal, the Americans referred to them as "unidentified aliens" – a descriptive but innocent term that the British took as an insult.

“After their release, the troopers made no complaint at their rough treatment but determined to get their own back on the USAF for the beating that they had received.”

The insider explained that that insulting “aliens” comment inspired the special forces to plan a UFO prank. He was told that the soldiers used black helium balloons and remote-controlled kites to carry lights and colored flares into the sights of the US base personnel, triggering a panicked response that the British thoroughly enjoyed. Then things started to get out of hand.

“Unfortunately, a senior US officer (Lt Col Halt) led the US contingent out into the forest on the second night and took along his tape recorder. The hovering and whizzing lights were sufficiently impressive for him to send a report to the MoD. Someone in London recalled the events of the previous August and questions were asked. A few red faces but also some satisfaction and amusement followed… The USAF was “reassured” at a very senior level and no UK investigation was undertaken – for obvious reasons!”

The informant swore all of this was true. Unfortunately for him he told it to the wrong guy. Clarke first contacted Robin Horsfall, a former SAS sniper and member of the famous Special Forces operation that stormed the Iranian Embassy in 1980 to free hostages. He said he would have heard about such a seemingly great prank through the SAS grapevine, but if he did, he wouldn’t have believed it or the August incident that allegedly triggered it.

“We did undertake planned training actions against British military establishments but never against those of the US forces. Working against US units with live ammunition without strict safety protocols could have got people killed with huge political ramifications. The idea of a revenge prank by [SAS] isn’t plausible as the rules controlling pyrotechnical devices within the regiment were very strict and any such action could have resulted in those involved being returned to unit.”

Then Clarke went to Col. Ted Conrad, the US Base Commander at the time of the incidents who ordered police from the 81st Security Squadron to conduct an informal investigation of the UFO sightings in the forest reported by his personnel. He disagreed first with the “aliens” comment.

“US bases are not on US soil, rather all of them remain on sovereign British soil…US citizens who are stationed and work there are the “aliens”.”

And then with the alleged capture and beatings.

“The SSA was guarded 24/7/365 by armed, trained security personnel who were instructed to shoot to kill, if necessary, to prevent a breach. It is unthinkable that either side would conduct such an exercise against an important facility where real weapons and ammo were present. The alleged rough treatment of British Special Forces by one US Lieutenant from the 67 ARRS is also unthinkable, but if it had been reported by complaint, the offender would have been more impacted by our disciplinary action that mounting a fake UFO landing could possibly have had.”

Those are the comments of military personnel in the know on both sides. Do they have any reason to lie or cover up the alleged prank? What does Clarke think? His PhD is in British folklore, which explains his analysis:

“So there we have it folks: another winter’s tale from the Rendlesham forest. The truth, though, remains persistently out there.”