In an earlier article here at Mysterious Universe, I discussed the alleged CIA document of 1962 on Marilyn Monroe, Howard Rothberg, and Dorothy Kilgallen, which refers to a “…visit by the President at a secret air base for the purpose of inspecting things from outer space.” Within some factions of Ufology, this has given rise to the theory that if the document is the real deal, then that same “secret air base” must have been Area 51, situated in the Nevada desert. Of course, the document may be nothing more than a complete hoax. I explained in my previously-referenced article that although I consider the document to be probably bogus, there are a few things about it that still keep me open-minded (to a degree, anyway!).

It’s significant to note that the matter of a secret facility of Area 51-like proportions popped up in another setting, but also in 1962. As well as being the year in which Marilyn Monroe died, 1962 also saw the release of a novel that, two years later, was turned into a bug-bucks movie. The title: Seven Days in May. It’s an absorbing, thought-provoking story that tells of an attempted military coup to take control of the U.S. Government. Its authors were Charles W. Bailey II (who died in 2012 at the age of eighty-two) and Fletcher Knebel who, in 1960, interestingly, wrote a chapter on JFK for a book titled Candidate 1960. 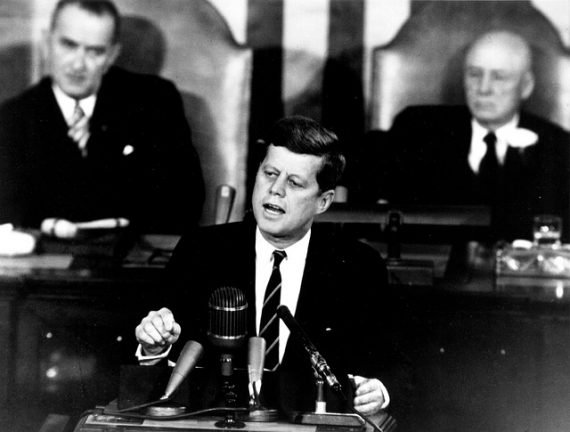 The novel was so well-received, and became such a huge-selling book, that it wasn’t long at all before Hollywood was knocking on the doors of the publisher. And, it wasn’t long after that – specifically in February 1964 – that the movie version of the Bailey-Knebel book hit cinemas all across the world. Interestingly, the screenplay for the movie was written by Rod Serling, of The Twilight Zone fame. Serling was also a significant figure in the field of antiwar activism – to the extent that several intelligence agencies had files on Serling, including the FBI.

Seven Days in May starred a number of major movie-stars of that era, including Kirk Douglas, Ava Gardner, Burt Lancaster, Fredric March, Martin Balsam, and Edmond O’Brien. In the story, Lancaster’s character of General James Mattoon Scott secretly initiates a plan to take over the elected U.S. Government (run by President Jordan Lyman and played by March) by force. General Scott sees President Lyman’s plans to enter into a nuclear treaty with the Soviet Union as weak and ineffectual and a danger to U.S. national security and to the American people.

It’s only when Kirk Douglas’ character of Colonel “Jiggs” Casey stumbles on strands of the plan that things slowly start to unravel. To his horror, Casey comes to realize that what begins as a wild suspicion is an all-too-real fact: the government is about to be toppled in favor of a new, military-driven government. When Casey speaks with the president and his closest aid Paul Girard (actor Martin Balsam), their response is filled with nothing but skepticism. At least, at first. It’s only when Casey shares all that he has found out, and the president begins to realize what is secretly going on right under his nose, that steps are taken to try and stop the coup and have the conspirators arrested as traitors. So, a race begins. It’s a race which will decide the very future of the United States.

Unbeknownst to just about everyone outside of the planned coup – including the president and his entire team – a top secret facility has been established out in the desert outside of El Paso, Texas. It’s the headquarters of the organization which wishes to overthrow the White House – an organization we come to learn is known as ECOMCON, or Emergency Communications Control. Senator Raymond Clark (Edmund O’Brien) is ordered to find the base. At first, Clark is doubtful that such a secret installation could have been constructed without any kind of Congressional oversight or funding. That is, until he sees it for himself. Clark learns it’s code-name is “Site Y.” As the story progresses, we see a mysterious death, mounting conspiracies, and intrigue and mystery, and we learn more about that Area 51-style secret base known as Site Y. And, finally, there is a confrontation between President Lyman and General Scott, a confrontation which brings the country back from the brink of a military dictatorship.

The document concerning Marilyn Monroe’s knowledge of a “secret air base” was allegedly written in 1962. That was the same year in which the Knebel-Bailey novel, Seven Days in May, was released and became a best-seller – and which had at its heart a classified installation that is practically impenetrable and which not even the president knows about. And, in 1964, in the movie spin-off, we are further exposed to the world of an Area 51-like base. In view of all this, one has to wonder if there had been a leak of data back in the early 1960s – a leak which reached the ears and eyes of a world-famous actress and a couple of enterprising writers, and which was focused on a clandestine facility that, for all intents and purposes, operated outside of the elected government.

We may never know for sure if such a leak did occur – and/or if a 1960s-era equivalent of Edward Snowden decided to blow the whistle on a real Site Y – but, there can be no doubt that while Site Y is fiction, it eerily mirrors what we know of Area 51: both have notable code-names. Both installations are buried deep in desert environments. Most people in government have no idea what goes on there. Not even the government can figure out where it gets its funding from. And, access to the base is almost impossible, unless one has the required clearance levels and a need-to-know.

It should be noted too that Fletcher Knebel – the co-author of Seven days in May – was someone who had a great deal of distrust of government and of the intelligence community. His novels – which included Trespass, Sabotage, and Vanished – are tinged with varying degrees of conspiracy. It’s also a fact that Knebel had a number of unnamed insiders in government who helped to ensure the accuracy of some of the concepts and government protocol presented in his novels. In light of all this, one has to wonder if one of those sources shared certain data with Knebel on Area 51, which he reworked into Site Y.

The Police, The FBI, and Psychics