An asteroid belt is full of asteroids, so a collision in this narrow and crowded orbiting highway of rock wouldn’t seem to generate anything more than a “Duh!” from astronomers. However, a recent crash in the main asteroid belt between Mars and Jupiter caught their attention because of its violent impact which seems to have turned one of the asteroids into a comet with an extremely long tail. Doh?

“On 9 Jan. 2019, the Central Bureau for Astronomical Telegrams issued an electronic telegram reporting that the inner main belt asteroid (6478) Gault had a tail. This made the object a very important target to monitor and we managed to get a few images on two nights.” 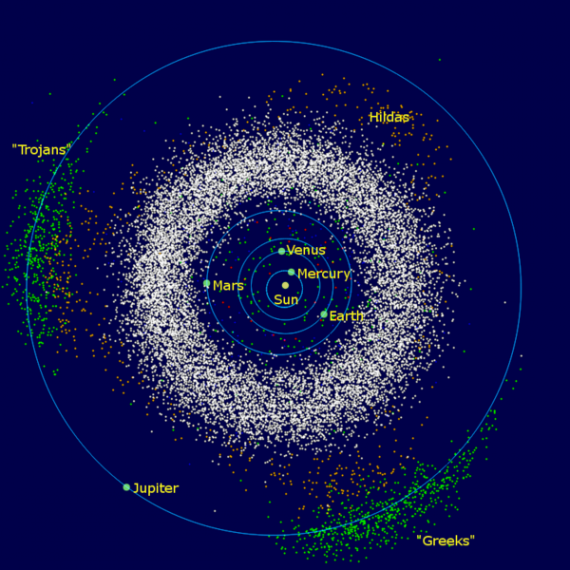 That electronic telegram (nice to see someone is still using telegrams) was read by The Virtual Telescope Project – an advanced service provided by the Bellatrix Astronomical Observatory in Italy providing remote Internet access to several robotic telescopes for the general public – and distributed worldwide. 6478 Gault is already somewhat famous, having been discovered in 1988 by the astronomer couple Carolyn and Eugene Shoemaker at the Palomar Observatory in California. The Shoemakers are best known for discovering the Comet Shoemaker–Levy 9, whose collision with Jupiter in July 1994 was televised worldwide.

Asteroid Gault (named for American planetary geologist Donald Gault, a pioneer in the field of impact cratering processes – coincidence?) is part of the Phocaea family of space rocks created 2.2 billion years ago by another collision which resulted in Gault (a large asteroid 3.7 km/ 2.3 miles in diameter, countless other little space rocks and 25 Phocaea, a huge asteroid about 75 km/46 miles in diameter. Researchers with the ATLAS project (Asteroid Terrestrial-impact Last Alert System) spotted the sudden appearance of a tail on Gault in late December/early January observations.

British astronomer Alan Fitzsimmons tweeted that the tail is over 400,000 km/240,000 miles long and would stretch from Earth to the Moon and then some. Astronomer Gianluca Masi posted on the Virtual Telescope Project blog that the tail was most likely created by a collision that blasted a part of Gault into the smithereens that now make up the tail. (See the pictures here.) No one seems to know which rock – if it still exists – collided with 6478) Gault somewhere in November 2018. What the astronomers do know is that an asteroid with a tail is an extremely rare condition that they still don’t seem to fully understand – as evidenced by all of the conflicting stories about whether tail-streaming ’Oumuamua is a comet, an asteroid, a space ship or something else.

What is 6478 Gault now? If it keeps the tail, and astronomers will be monitoring it closely, then it’s definitely turned into some form of comet. If it loses the tail, it’s still an asteroid. If the collision knocked it hard enough to put it on a collision path with a planet (hopefully not Earth), it will make the Shoemakers famous once again.