Residents of Ontario, Canada had a rare and spectacular view of a very odd-looking upside down rainbow. Technically called a circumzenithal arc, it is caused by ice crystals in the upper atmosphere that act as a prism which refracts light and creates an upside down rainbow.

Although they look identical to a rainbow (with the exception of being upside down), they’re not technically rainbows. Rainbows are formed when light reflects off of water drops such as rain or fog, while a circumzenithal arc is the result of light refracting off ice crystals in the upper atmosphere and are related to the very commonly seen halos that appear around the sun and moon. In addition, the weather has to be calm and cold, which is definitely not a problem with it being winter in Canada. Circumzenithal arcs normally appear when little to no clouds are in the sky. 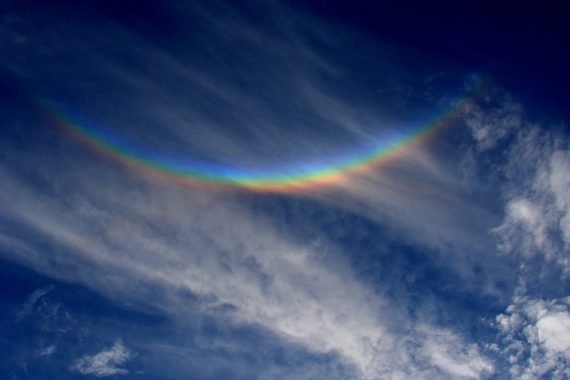 The center of the bow is always towards the sun with the red color on the outside closest to the ground and purple at the top. They only happen when the sun is at a height of less than 32 degrees in the sky.

Canadian residents witnessed another beautiful phenomenon recently called “sundogs” which is when mini-suns appear hovering close on each side of our actual sun. The technical name is parhelion and the spots on each side of the sun are usually white but can sometimes appear as a reddish color located on the inside and blue on the outside.

Sundogs are created when the sun shines through a cirrus cloud that’s made up of hexagonal ice crystals that are falling with their axes located vertically. When the axes are arranged perpendicularly to the sun’s rays, they instead create the halo phenomenon. Sundogs appear at 22 degrees on either side of the sun and are also at the exact same height as our sun. 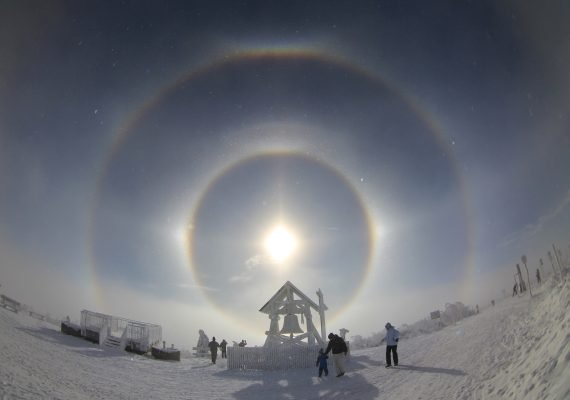 These sundogs can even be seen in tropical countries because the cloud layer is “cold no matter where you are,” according to British physicist Les Cowley.

Click here to see pictures of the upside down rainbow and the sundogs.

So next time you’re outside on a bright sunny day, you may want to look up at the sky and you may catch a glimpse of a rare, but spectacular weather phenomenon.