It seems that every culture has a mythical “trickster” creature whose abilities to fool humans range from simple embarrassment to serious bodily harm. Japan’s trickster is the Tanuki – a raccoonish-doggish creature with a penchant for mischief and an ability to shape-shift that puts him in the entertaining children’s bedtime stories category … except for its enormous testicles. As with many mythical tricksters, the Tanuki has a real-life counterpart – the Japanese raccoon dog – and a group of these creatures roaming the grounds of the Japanese royal palace are doing some actual shifting with the cause being somewhat related to those titanic testicles.

“Raccoon dogs likely perceive human disturbance as predation risk and avoided this by shifting their temporal, but not spatial, activity pattern to minimize disturbance.”

A recent study in The Journal of Wildlife Management by Masumi Hisano, a graduate student in biology at Lakehead University in Canada, looked at the mysteriously changing bathroom habits of the Japanese raccoon dog (Nyctereutes procyonoides) by setting up motion-activated cameras at latrines (the common places where raccoon dogs urinate and defecate) on the Akasaka Imperial Grounds in Tokyo. Why latrines? It turns out these piles of poo are the primary way raccoon dogs communicate with each other (think dogs and fire hydrants) and there is some concern the creatures are having a communication breakdown that’s driving them insane (or at least creating annoying sexual and gastric issues). 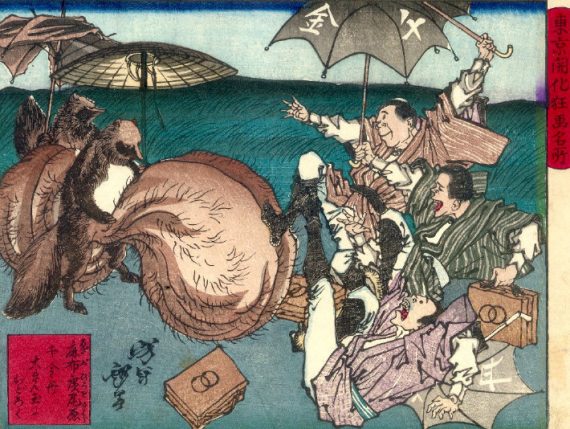 Those are the lyrics of a traditional Japanese children’s song about the Tanuki, whose enormous endowment and shape-shifting abilities first appeared in the Nihon Shokai (The Chronicles of Japan) in 720 CE. One popular story involves a peasant freeing a tanuki from a trap. In gratitude, the tanuki shifts into a teapot which the peasant sells to a Buddhist monk. Unfortunately, that life was too hot for this tanuki, so it half-shifts back to a raccoon dog and runs back to the peasant, who gets rich taking the trick-performing half-tanuki, half-teapot on tour. This explains the tanuki’s “bubbly” personality and possibly the giant gonads, whose resemblance to money bags signifies that the tanuki can bring good fortune. The cute Tanuki dolls sold everywhere in Japan depict both its body and its balls as big and round. The Tanuki made an appearance in the 1990 Nintendo game Super Mario Bros. 3 where Mario can put on a “Tanooki” Suit and transform into a magical raccoon-like animal that flies.

In reality, the Nyctereutes procyonoides is neither raccoon nor dog but a tree-climbing relative of the fox (another trickster) and often farmed for their fur in conditions that horrify animal rights activists. They’re still seen in the wild and are considered an invasive species outside of Asia. And, despite their money-bags reputation, they’re really not well-liked in Japan either and that problem goes back to those latrines, which smell awful and spread diseases. As a result, humans have them removed and this is disrupting the primary tool raccoon dogs for communicating and attracting mates.

Masumi Hisano’s study (remember that?) found that the raccoon dogs have temporally shifted their bathroom habits to nighttime in order to avoid humans. That change in behavior was confirmed in European observations where the raccoon dogs have joined actual raccoons in rooting through the garbage at night and this has actually aided in their success as an invasive species. On the other hand, the reduced latrine visits may be causing health issues and forcing physical changes as well.

“The raccoon dogs need not acquire totally novel modes of behavior but by shifting existing patterns into an even more nocturnal direction, the animals have colonized European regions very successfully.”

Needless to say, things do not bode well for Tanuki outside of Japan and, based on the research and the popularity of its faux raccoon fur, may not be good in Japan but outside the Royal Gardens either. It’s not clear how the magical fortune-bringing testicular money bags work, but the Tanuki may want to try rubbing them.

A Secret Base: “Groom Mountain Area is Withdrawn”