"At present, we have no idea of the origin "

This is not what you want to hear from the people who run the Asteroid Terrestrial-impact Last Alert System (ATLAS) project. Yet that was the message issued on January 25th by the astronomers running the ATLAS-HKO telescopes at the top of the Haleakalā volcano on the Hawaiian Island of Maui. (If your job is to look for asteroids that could kill you, it’s at least nice to know you’ll die in Hawaii.) They were watching a Near Earth Object that was about as near as you can get – 600 km (370 miles) above Earth’s surface at the perigee of its highly elliptical orbit whose apogee is 1.4 times the distance to the Moon. If they don’t know what it is and it’s orbiting the Earth, then it must the ...

Wouldn’t that be a great story to take our minds off of the rest of our problems? Unfortunately, A10bMLz (they had to give it a name so they could record it in the log and get paid) is not the alleged extraterrestrial satellite which has been orbiting the planet for at least 13,000 years and was supposedly detected by Nikola Tesla. However, it’s definitely a mysterious object that most people outside of the space field have probably never heard of before … an Empty Trash Bag Object (ETBO). A what? 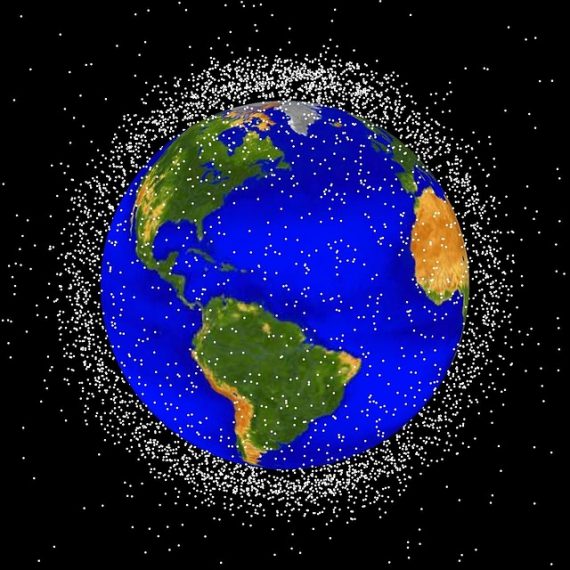 “This suggests that it is what is known as an "empty trash bag object": A piece of light material (probably metallic foil), left over from a rocket launch. It is not clear yet when A10bMLz has been launched.”

That observation comes from the Northolt Branch Observatories of London, which was tasked with identifying the 1 km (2.2 lb.) A10bMLz using Project Pluto astronomical software. (See a video on their Facebook page.) As one would expect, the name comes from the fact that the object behaves like a trash bag being blown about by the wind. The difference is that this ETBO Is at least 370 miles up – the highest observance of one of these rare objects.

The “trash bag” part makes it sound pretty safe. Are we in any danger from this ETBO? Well, its behavior is unpredictable and there’s no past history to use in a model.

“As with an empty trash bag blowing down the street, it may zig and zag in unpredictable ways. The nominal orbit, though, suggests that this object had a much higher perigee; it dropped to within a few hundred kilometers on this most recent perigee. I do not see any recent lunar flybys, and would not speculate on when it might hit the earth or moon or leave the earth-moon system.”

So, we’re not in any danger and neither is the Moon. Unfortunately, A10bMLz is far less intriguing that the Black Knight Satellite … unless this whole Empty Trash Bag Object is just a ruse to cover-up an accidental observation of it. Or is it an outer-space ploy by environmentalists to finally put an end to the wasteful usage of plastic bags?

For now, it’s a good example of the ever-increasing variety of space junk in orbit that is endangering the ever-increasing number of private space flights being planned. Which will come first … the accident or the Space Junk and Empty Trash Bag Objects Collection Mission?

A Mysterious Mold is Eating an 800-Year-Old Cathedral