Some of the most haunting mysterious unsolved crimes revolve around people who just seem to have come from nowhere and died under truly bizarre circumstances. They lived, breathed, loved, and had friends and family once, but at some point they passed in death into a realm where no one knows who they are, no one knows how or why they died, and they become a nameless ghost. One such case that rocked a small town community of the time was the discovery of a body unceremoniously tossed into a rural septic tank, abandoned there alone and forgotten, with no name and no idea of how he ended up there.

April 13, 1977 started as a day like any other on the secluded farm owned by a Mr. and Mrs. McLeod, near the small town of Tofield, Canada, just 42 miles outside of Edmonton, Alberta. Although the farmhouse itself had largely been abandoned to the elements for years, on this day McLeod was out on the property with his wife looking through the old septic tank that sat there rusting away beyond the trees in order to salvage a pump. What they found instead was a macabre sight that would shock them to the bone, and become one of the most chilling unsolved murders in Canadian history.

As they looked through the tank, the fetid stink enveloping them and the murky, muddy water sloshing around to exude a firce stench, there appeared at the scum encrusted surface a grey wool sock within a brown shoe, which they found to be rather odd and out of place. When they went to retrieve the mysterious sock it was found to be attached to a leg, which went down into the brown water to something they didn’t want to see. The authorities were immediately notified, and when they arrived they fished out a human body that had been stewing there in the dank septic tank for months, the corpse so badly decomposed that it was impossible to tell if it had even been a man or a woman. Considering that the body had been stuffed into a rural farm’s septic tank indicated that there was foul play involved, but it wasn’t until the body was properly examined that the full extent of the shocking details would be revealed. 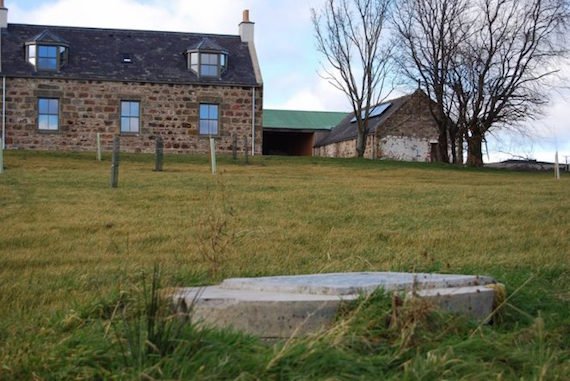 The mysterious body was found to have been that of a male, possibly of Caucasian or Native American ancestry, although it was hard to say for sure, and he had been around 28 years old and in good health. What was more pressing was that he had apparently been quite severely and ruthlessly tortured in the time leading up to his death, with the body showing signs of the victim having been tightly tied up, beaten, and horribly burned with a butane blowtorch and cigarettes all over the body. He had also been sexually mutilated before death, and had finally been put out of his misery with gunshots to the head and chest. The killer had then covered the corpse with quicklime to speed up decomposition, wrapped it up in a yellow sheet, tied it with cord, and then dumped it out in the filthy stagnant water of the half-filled septic tank, where it was surmised to have been bobbing about from between 4 months to a year, the quicklime mixing with the water to conversely keep it in relatively good condition. Even more remarkable is that the tank itself was well off the road, way back in the trees, meaning that the killer had dragged the body there through the brush specifically to throw it in there. By all signs someone had gone through great effort to not only kill the victim and hide the body, but to make sure he suffered to the fullest before they did so. For the most part, many of those who were at the scene and worked the case said that it was “the most vindictive and cruelest” crime they had ever seen.

By the time authorities had found it the corpse had been so mutilated, waterlogged and dissolved by lime and the elements that identification was nearly impossible, with not even fingerprints remaining, but they were lucky in that the victim’s teeth and extensive fillings and dental work had been mostly intact, allowing them to try and get a handle on who he had been, but this would prove to be easier said than done. The dental profile was run through police records and turned up nothing. The dental records were sent to over 800 dental experts all over the country, and even had them published in dental magazines and newsletters looking for leads, but there was absolutely nothing. Other attempts were made to find out the mystery man’s identity as well, such as artist’s impressions and questioning of people in the area, but this led to dead end after dead end, and there were no missing persons reports in Alberta at the time that matched. The man was a specter.

With no leads at all and no clue as to the mysterious victim’s identity, he was rather unglamorously nicknamed “Septic Tank Sam,” and eventually laid to rest at a pauper’s grave in Edmonton. The case pretty much died after that, and despite some occasional tips and leads nothing ever came of them. In 1979 the body was exhumed for further examination, and this turned up some additional details such as that he had likely been more like 35 years old at the time of death, probably a laborer or construction worker by trade, and that had suffered some unspecified malady in his childhood. DNA samples were also taken, and numerous measurements were made of the skeleton and skull in order to create a more accurate facial reconstruction. Unfortunately, none of the revised reconstructions, which were distributed throughout the country, provided any useful new information towards solving the cold case.

In the meantime, theories have run rampant as to who Septic Tank Sam was, why he had met such a gruesome demise, and how he had ended up in that disgusting tank. One idea is that he had been a transient passing through from somewhere far away, but why would anyone target him for such brutal treatment? The intense nature of his torture and murder suggests that he was specifically targeted for premeditated murder of the grisliest order, so what had he done and to who? Other theories are that he was mixed up with drugs or the mafia, and a very popular theory is that he had been a pedophile who had been caught red handed and met with swift vigilant justice. It is also suspected that the murderer was perhaps a local, as they seemed to know about that derelict farm and its remote septic tank, and knew that they could dump the corpse there without fear that it would be found for quite some time.

In the end no one really knows. There has never been a suspect detained in the killing and no new evidence or leads, and the case remains totally unsolved, as it probably always will be. Who was "Septic Tank Sam"? What did he do to deserve this horrific fate? He must have had family once, friends and those who loved them, so where are they? Who killed him and what had he done to deserve such terrifying last moments on earth, to end up in the cold fetid swill of a half full septic tank in the middle of nowhere? We don't know now and there is no answer in sight, and it has become one of the strangest unsolved murders of a person from nowhere in North America history. We don't know his name or who he was, and he is and perhaps always will tragically be merely Septic Tank Sam.

Lunar Nights Bring End To Cotton Sprouting On The Moon