The Mysterious Vanishing and Death of Stephen McKerron

Sometimes people just seem to completely vanish without a trace, to step off the face of the earth without any clear reason. On other occassions they later turn up dead, but this sometimes does very little to clear up the mystery. There are such cases out there that are so peppered with odd and unusual clues that they evade all conventional attempts to understand them, and one of these is the very weird disappearance and subsequent mysterious death of a young boy in Scotland, surrounded by bizarre clues and which has gone on to become one of the strangest cases the country has ever seen.

Tucked away within the quaint, rugged countryside near the craggy coast of Ayr, in South Ayrshire, Scotland, is a place once called Butlin's Ayr. Opened in 1946, it was designed to be an extravagant holiday camp for people looking to get away from it all for a bit of seclusion and relaxation, and the 110 acre complex was equipped with a variety of luxurious facilities such as a dining hall, amusement arcades, rides, indoor and outdoor pools, a seaside amusement park, a boating lake, tennis courts, ballroom, theater, medical center, chalets, and even its own miniature railway. The camp has changed names over the years, becoming Wondercrest World in 1982 and then Craig Tara in 1999, and although it seems like a nice place to visit it is perhaps most famous as the setting for the very mysterious disappearance and death of a young boy named Stephen McKerron.

On September 19 of 1988, the 5-year-old McKerron was visiting the camp from Hamilton, Scotland on holiday with his aunt and uncle, Lyn and Ian Sneddon. By all accounts this was supposed to be fun day out, and the boy had been looking forward to it all immensely. At first it was everything he had ever dreamed of, and the family had a great time enjoying the myriad attractions the park had to offer on a fine, clear day. It should have been a dream, but it was all about to turn into more of a nightmare.

At one point during the otherwise joyous day, McKerron was playing on an escalator not far from the Sneddons, who were keeping an eye on him. For just a brief moment the boy was hidden from view by the crowds, and then he was just gone. At first the Sneddons thought nothing much of it. After all, he had just been right there and had only been obscured for a second, so they assumed that he had just wandered off and could not have gone far. The couple walked around the area where he been standing just moments before, but the boy was nowhere to be seen, and when they called his name there was no answer. Considering the park was quite crowded, they were still not fully alarmed just yet, but after spending about half-an-hour scouring the immediate area it began to set in that something was very wrong indeed, and authorities were notified. A full, intensive search of the camp and its surrounding remote countryside for 5 miles around would turn up no sign of the boy, and the case would quickly catapult itself to one of the largest missing persons searches in Scottish history, involving hundreds of police and volunteers, using dogs, aircraft equipped with special infrared cameras, and even divers to search the water, but still there was no trace. Flyers with the boy’s picture and descriptions of what he had been wearing were also widely distributed and led nowhere.

The immediate theory was that McKerron had been abducted, that it was the only answer for why he would be nowhere in the camp or its vicinity, and there was one report from a witness claiming to have seen him at a park café with an unidentified middle aged man, as well as a few other witnesses who said they had possibly seen him walking about the camp holding hands with a man, but this was inconclusive, and indeed according to one witness it seemed as if the man was even perhaps trying to comfort and help the lost McKerron, possibly even trying to help him find his aunt and uncle. While kidnapping seemed an easy explanation, odd clues began to come in from other witnesses who gave testimony that suggested otherwise. One witness claimed to have seen McKerron climbing over the camp’s 7-foot high fence at around the time of his vanishing, and several drivers said that the boy had been seen walking alone along the nearby Ayr-Turnberry road. If that were true, then it suggested that he had for whatever reasons run off to venture off on his own into the wilderness on foot, but if that were the case how could he have gotten so far undetected amidst such a massive large scale search over isolated terrain for miles around?

The mystery raged until 16 days later, when on October 2 a woman was walking her dog in the vicinity of a place called the Carrick Hills, around 6 miles from the camp, when she came across the dead body of a boy lying curled up in a ditch near some lonely, mist shrouded farmhouses. It was quickly identified as the missing McKerron, but the mystery wasn’t quite solved yet. Although it had by this time been assumed that he must have been murdered, there was not a mark on him, no sign of injury or struggle, and the official autopsy would cite exposure to the cold weather as the cause of death, made somewhat odd in that he was missing the jacket he had been wearing and left with only his t-shirt. Where had the jacket gone? Another weird little clue was that the boy’s socks had been removed and stuffed into his pocket and then his shoes put back on without them. Why would he do that in the frigid weather? Making it even odder still is that the boy’s father would later claim that his son did not even know how to tie his own shoes.

Still another curiosity is that the massive search had methodically and thoroughly scoured the area nearly immediately after the vanishing but had seen no sign of the boy. While there was much criticism aimed at the police for not extending the size of the search area, authorities insisted that their search radius was more than adequate, and that it would have been nigh impossible for a 5-year-old boy to navigate the thick woods, marshes, and various hills and gullies that made it notoriously difficult terrain for even an adult to manage for such a distance in so little time on his own. Indeed, McKerron’s family would state that they knew he would have been physically incapable of such a harsh journey so quickly. So how did he get all way out there so fast and completely undetected? Was he possibly transported there by an abductor? There were no signs of anyone else at the spot, and then again why would a kidnapper bring him all the way out there just to abandon him in his t-shirt and then take off his socks to put them in his pocket, and then put his shoes back on? None of it made any sense, and in fact still doesn’t. 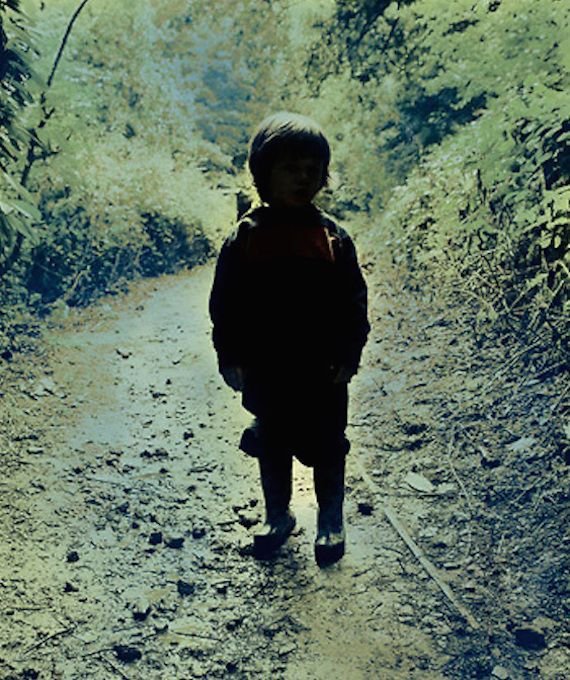 An enquiry into the case in 1989 saw police leaning towards the idea that McKerron had simply run away, then wandered out there past the search perimeter, somehow evading detection, and then kept walking beyond what people had thought him capable of until he collapsed out there in that remote area and died, possibly taking refuge in the ditch for warmth, all the while having removed his jacket and socks for reasons unknown. It is odd for a number of reasons, not the least of which is that there doesn’t seem to have been any reason for why the boy would have wanted to run away, as he was not only purportedly a happy, well-adjusted child, but he had also been having the time of his life at the camp before suddenly disappearing without warning. When asked why McKerron would want to leave and take his chances out in the bleak, forbidding Scottish countryside, one investigator on the case named Gerry Gallacher has postulated:

Why do I think Stephen ran away? I think he was a little boy who was missing his mother and father, who was homesick and who was trying to make his way home to Hamilton, which makes the whole incident even sadder.

This has been the official consensus, but obviously it doesn’t work for a lot of people skeptical that this would have been the case, including McKerron’s own family. This theory does not seem to adequately explain why he would do so when he had been having such a good time beforehand, nor how he could have gotten so far so fast, why he would be missing the jacket, and why his shoes would have been removed, his socks taken off to be shoved into his pocket, and then the shoes put back on, all by a boy who allegedly did not even know how to tie them. There are plenty of people that don’t buy it that this was all the doing of a rebellious lost little boy, but as to what might have really happened no one knows, and the strange case of Stephen McKerron is likely doomed to remain a case that is officially closed, but forever orbited by mysteries and questions we will never see an answer to.