Well, that didn’t take long. On December 30th, 2018, researchers from the SALSA (Subglacial Antarctic Lakes Scientific Access) expedition used hot water to drill through Antarctic ice to a depth of 1,084 meters (3,556 feet) to reach Lake Mercer – a “lost” lake buried 600 kilometers from the South Pole. While they expected to find the microbes that seem to exist everywhere and in the harshest conditions, the researchers scraping mud off of an instrument retrieved from Lake Mercer were stunned to find it contained the remains of higher life forms – crustaceans, plants and one hardy little eight-legged bear.

In a press release published in the journal Nature, University of Nebraska-Lincoln micro-palaeontologist (talk about specialization) David Harwood described his reaction to what he saw with his microscope positioned over a speck of the mud from a lake that has been locked under the ice for thousands of years. He expected to see the million-year-old shells of photosynthetic algae from Antarctica’s warmer times. What he didn’t expect was something that looked like “an old leaf that’s been sitting on the ground for a season.” That “leaf” turned out to be the shell and legs of a shrimp-like crustacean. In micro-paleontology, where there’s one, there’s bound to be another and sure enough, Harwood found a fresher specimen that looked much like it did when it was alive. He also recognized that one of the legged creatures was a tardigrade, the 'water bears' that seem to be able to survive the harshest conditions, and things resembling worms were tendrils of a land-dwelling plant or fungus. 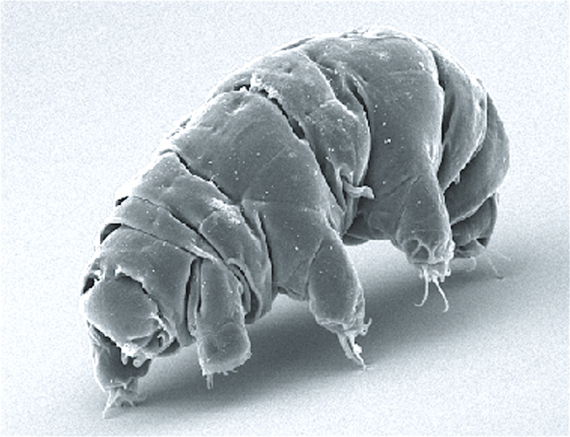 To rule out the possibility that the unexpected creatures were the result of their own doing, the researchers sterilized the probe and sent it back down again. Harwood’s microscope found more crustaceans in the new mud. That means they definitely lived in Lake Mercer. But how did they get there?

To answer that question , the mud was sent to animal ecologist Byron Adams at McMurdo Station on the Antarctic coast. He recognized the crustaceans, tardigrade and fungi as the same creatures he’s seen alive in regions of Antarctica called the Dry Valleys and the Transantarctic Mountains. Based on that, he believes the creatures actually lived tens of thousands of years ago in the Transarctic Mountains. After they died, their remains were washed down into Lake Mercer where they intermingled with the million-year-old diatoms.

“What was sort of stunning about the stuff from Lake Mercer is it’s not super, super-old. They’ve not been dead that long.”

That’s disappointing news to those who were hoping the creatures actually lived in the buried lake, but Adams doesn’t rule out the possibility and would like to see more mud, thinking “it’s possible that you could still find things that are alive.” In the meantime, he points out that biologists are now changing the history of Antarctica once written by geologists and glaciologists. The SALSA will now use radiocarbon dating to determine the age of the creatures and DNA testing to find out if they lived in fresh water or the ocean. Further tests will determine if they were surface creatures eating algae or were actually able to live in the dark, sub-ice lake where they were found.

This is truly exciting research, but the scientists are racing against the Antarctica-melting force of climate change. Will we find out where we came from before it’s no longer here?