Triangles Over the Southeast: Did Multiple Witnesses See a Large Mystery Aircraft in the 1980s?

"A very intriguing aircraft was being reported in the late 1980s. Some observers claim to have witnessed a vast black flying wing, estimated at between 600 and 800 feet in width, passing silently over city streets in California.”

The quote above, featured at one time as part of a description featured online at the website of the Federation of American Scientists (FAS), dealt with an alleged aircraft that, since the 1980s, has become a mainstay of modern UFO literature.

“The craft moved so slowly one observer claimed that he could jog along with it,” the entry continued. “The aircraft reportedly executed bizarre maneuvers in which it stopped, rotated in place and hovered vertically, pointing its thin trailing edge toward the ground. This vehicle's unlikely gyrations suggest that it is distinct from the other sightings, and could be a lighter-than-air craft pushed by slow-turning propellers.”

The description here is strange indeed, and although the FAS didn’t provide additional details about the circumstances or witnesses to the events described above, the description is generally similar to other written accounts of so-called “flying triangles” that have appeared over the years.

A number of years ago, while filling in as host of a local radio program in my hometown of Asheville, North Carolina, I received a call from a man named Brian, who shared his own story of seeing one of these aircraft over our town in 1988. Having discussed Brian’s story numerous times on my podcast, The Gralien Report, I had always hoped that some form of verification of the sighting might occur, since I was never able to track down the caller (despite numerous efforts, and a few near-misses, over the years).

However, late last year I did finally receive word from a gentleman named Randy who, upon listening to a description of the events from 1988 on an episode of my podcast, wrote to me and shared his own experience from around the same time, and just a little North of Asheville.

“Something caught my attention yesterday on my drive,” Randy said in his email to me. “I was listening to this weeks episode about UFO Cults & Odd Cases when you were recounting someone's tale regarding a triangle shaped craft in the Asheville area back in the late 80s. The reason I'm writing is, I think I saw the same one.” 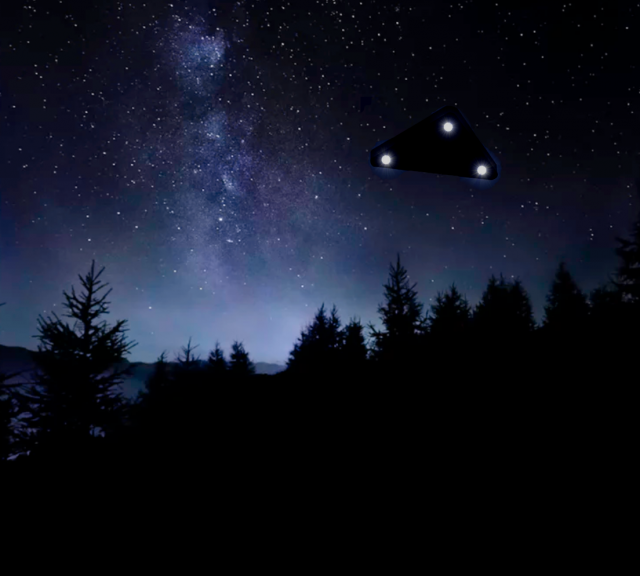 Randy shared the following story about his sighting:

“I grew up in Southwestern Virginia right on the VA/TN border.  My grandmother lived in Kingsport, TN and we used to visit her frequently. I must of been around 9 or 10 years old at the time.  One night, as we were about to leave to head home, my dad was already outside talking with my grandmother saying their goodbyes. Dad called for me to come outside. Hearing the urgency in his voice, my brother and I ran outside to see Dad and Grandmother staring up at the sky.”

“It only took a second to see what they were looking at,” Randy said. As he stepped outside, he saw an object at a distance he judged to be approximately 100 feet above the tree line in the distance. The object was “a large black triangle” which appeared to have a single light at each corner. Randy also remembered there being “a larger light in the center.”

“It moved very slowly and made no sound.  I couldn't make out any features other than the general shape and the lights. We all stood there and watched it as we discussed what it might be for what seemed like five minutes or so.  We watched it until it disappeared to the west.”

“As you know, Kingsport is roughly sixty miles straight line distance from Asheville, and the time frame seems to fit.  So who knows, maybe it was the same thing.”

Did Brian and Randy see the same aircraft? Who knows… it’s possible, at least, although there’s no way to prove that. If anything, what it really suggests is that an aircraft that matches the description of both observers here—possibly some kind of military aircraft akin to a “stealth blimp,” as some have inferred over the years—is seen more often than some would expect.

Or, at least, that such an aircraft was certainly making its rounds over the Southeastern United States during the late 1980s. Supposing for a moment that this aircraft was part of a highly classified black budget program, questions remain as to what it's operational goals might have been (reconnaissance, weapons delivery, transport, etc). While reports continue today, it seems the "buzz" surrounding sightings of this aircraft hit their peak during the 1990s, with notable incidents that may involve a similar aircraft extending into the new millennium; most notably, the well-documented January 2000 Saint Clair, Illinois incident.

In any case, the intrigue that surrounds reports of these large "triangle" aircraft has persisted over the years; whether or not they are seen as frequently today, they remain indelibly a part of the culture of UFO and black budget speculations in modern America.

UFOs, Uranium and a Pilot’s Encounter