Conservators at the University of St. Andrews located in Scotland found the world’s oldest periodic table poster while cleaning out a storage room. While they were digging through the clutter of old lab equipment, they discovered a collection of large rolled up charts that were used for teaching and among them was the ancient periodic table. It was written in German and was printed on linen-back paper that was so old that if anyone touched it, it would begin to crumble.

According to school records, the periodic table chart was bought in Vienna by Thomas Purdie who was a chemistry professor at St. Andrews in 1888 and he more than likely hung the poster up in his classroom right up until he retired in 1909. It is also believed that this table is the only surviving one in Europe from that period of time. 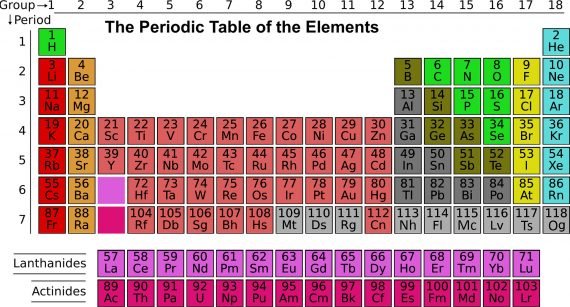 In order to determine exactly how old the poster actually was, researchers looked at which elements were printed on the chart and which ones were left out. A news release from the university read in part, “both gallium and scandium, discovered in 1875 and 1879, respectively, are present, while germanium, discovered in 1886, is not.” In addition, the inscription at the bottom left of the poster read, “Verlag v. Lenoir & Forster, Wien” which referred to a scientific printer who worked in Vienna from 1875 to 1888. And another inscription that read, “Lith. von Ant. Hartinger & Sohn, Wien” indicated who the lithographer of the chart was and he passed away in 1890.

Click here to read the news release from the university and to see a picture of the old periodic table that was found.

Professor David O’Hagan, who was the former head of chemistry at the University of St. Andrews, said that the periodic table will be on public display later this year and will also be available for research there. He said in a statement, “We have a number of events planned in 2019, which has been designated international year of the periodic table by the United Nations, to coincide with the 150th anniversary of the table’s creation by Dmitri Mendeleev.”

The old poster that was found at the university dates back to around the same time that the periodic table was first created. A Russian chemist named Dmitri Mendeleev created the world’s first periodic table by ordering the elements based on their atomic mass as well as how they were able to bond with other elements. He then showed his findings to the Russian Chemical Society in 1869 and shortly after that the first ever periodic tables were published.

Gabriel Sewell, who is the Head of Special Collections at the university, said, “We are delighted that we now know when the oldest known periodic table chart came to St. Andrews to be used in teaching. Thanks to the generosity of the National Manuscripts Conservation Trust, the table has been preserved for current and future generations to enjoy and we look forward to making it accessible to all.”

Some Weird Cases of Monsters in Ponds