Historians in England have identified a massive new collection of symbols intended to ward off evil spirits and demonic forces. If confirmed, this new set would be England’s largest known set of apotropaic marks or "witch marks," symbols used to defend against dark supernatural forces. What were these marks guarding, and who put them there?

The new collection of “witch marks” was found in the Creswell Crags, an enclosed limestone cave system on the border of Derbyshire and Nottinghamshire, England. The marks include hundreds of letters, symbols, and strange patterns carved deep into the walls of a large limestone cave which contains a “deep, dark hole” that remains unexplored. The marks were identified by Hayley Clark and Ed Waters of Subterranea Britannica, a research group devoted to the study and investigation of man-made and natural underground places throughout the UK.

Clark and Waters were on a guided tour of the Creswell Crags when they spotted the marks hiding in plain sight. The Creswell Heritage Trust which operates the site has for years thought the marks were graffiti made in the Victorian period, but Clark and Waters immediately suspected them to be apotropaic marks. Experts from nearby universities confirmed their suspicions soon after, and have dated the marks to the 17th and 18th centuries.

Alison Fearn, a Leicester university expert on protective marks, told The Guardian that the marks were likely intended as protection against whatever foul things local people believed were at the bottom of this cave system. “It could be fairies, witches, whatever you were fearful of, it was going to be down there,” Learn adds. Whatever these symbols’ creators were afraid of, they were very afraid of it: the cave system appears to be full of thousands of them. 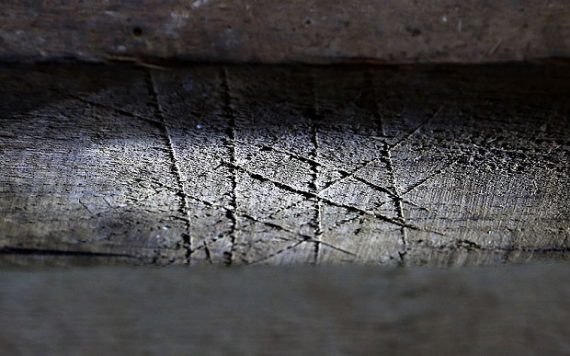 Paul Baker, director at Creswell Crags Museum and Heritage Centre, told The Week that these symbols were likely intended to keep what local people historically viewed as an entrance to the evil underworld. “These marks were either to keep something in, or to keep something out,” says Baker. “I think over a period of time this hole was blamed or associated with a series of events, illnesses or crop failures to the point in which they hoped the marks would protect them.”

While this discovery is being hailed as one of the most significant developments in the study of these “witch marks” and other apotropaic symbols, I’m more interested in what may lie at the bottom of the dark, mysterious hole in Creswell Crags. Did 17th and 18th century people know something we don’t?