In April 1961, a UFO encounter occurred in Eagle River, Wisconsin that many researchers of the flying saucer phenomenon have seen fit to relegate to the domains of hoaxing and/or fantasy. It just might have been something else. It was the late morning of April 18 and the tasty brunch of a man named Joe Simonton was about to be rudely interrupted by visitors from another world. A chicken farmer, Simonton was about to eat when he was shaken to his core by the thundering sound of what he thought was a jet-plane, flying low overhead. It was not. He raced outside and was confronted by nothing less than a flying saucer, around thirty feet in diameter, hovering above his yard.

Simonton could only stand and stare, in awe, as a doorway opened and a man approached him. He and his comrades inside the UFO were all short in height – around five feet at the most – and wore outfits similar to military jumpsuits. The completely mute man approached Simonton with what clearly resembled a terrestrial jug, and managed to make Simonton understand that he wanted water. Simonton quickly obliged. As a “thank-you” the aliens gave Simonton a hot plate of what appeared to be small pancakes, fresh off of ET’s grill. Yes, really. It was a good trade-off for the farmer. The leader of the group gave a strange salute and returned to the craft, which shot away, into the heavens. 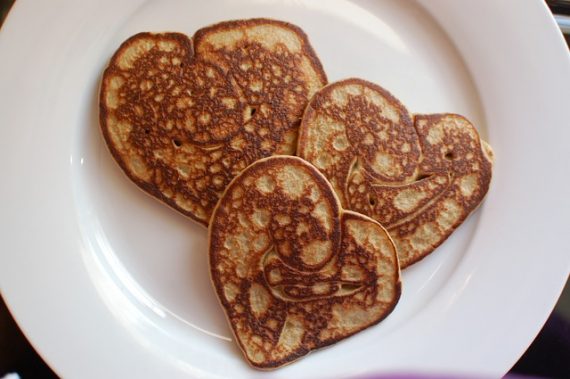 It’s important to note that Joe Simonton’s account is not a stand-alone one when it comes to pancake-type food of the weird kind. Walter Yeeling Evans-Wentz was an authority on fairy lore and the author of a still-cherished 1911 book, The Fairy Faith in Celtic Countries. He told an intriguing story that somewhat parallels that of Joe Simonton. It revolved around an Irishman, one Pat Feeny, who received a strange visit from a diminutive woman asking for oatmeal. Evans-Wentz said: “Paddy had so little that he was ashamed to offer it, so he offered her some potatoes instead, but she wanted oatmeal, and then he gave her all that he had. She told him to place it back in the bin till she should return for it. This he did, and the next morning the bin was overflowing with oatmeal. The woman was one of the Gentry.”

And also on a similar path, there is the 1850 poem of William Allingham, The Fairies, in which Allingham referenced “crispy pancakes” as being none other than the food of the fairy folk, or as he called them, “little men.” He even made a connection to the curious matter of owls. Allingham’s poem begins as follows: “Up the airy mountain, Down the rushy glen, We dare n’t go a-hunting, For fear of little men; “Wee folk, good folk, Trooping all together; Green jacket, red cap, And white owl’s feather! Down along the rocky shore Some make their home, They live on crispy pancakes Of yellow tide-foam; Some in the reeds Of the black mountain-lake, With frogs for their watch-dogs, All night awake."

Allingham also describes what sounds like a classic case of alien abduction and missing time: “They stole little Bridget For seven years long; When she came down again Her friends were all gone. They took her lightly back, Between the night and morrow, They thought that she was fast asleep, But she was dead with sorrow. They have kept her ever since. Deep within the lake, On a bed of fig leaves, Watching till she wake.”

Precisely what all of this means is just about anyone's guess. A tasty meal from the stars? A nice snack from the world of the little people? I have no answers at all. Maybe you do.