St. Patrick’s Day is just around the corner, and what better way to celebrate it than on your own ancient Irish island, complete with ruins dating back to 300 BCE and a large round cursing stone where you can curse your enemies of friends who showed up at your St. Patrick’s Day party late and without bringing their own beer to your uninhabited island? Besides the cursing stone, the ruins are of a monastery built by St. Féchín of Fore, whose feats and legends – including creating a well of healing water that doesn’t boil -- make one wonder why he doesn’t have a day of celebration in his honor as well. Interested?

High Island or Ardoilean is an island located approximately 3 kms off the west coast of Connemara, close to Claddaghduff and Inishbofin. The island extends to approximately 32 hectares (80 acres) of mostly island grazing with the benefit of two natural fresh water lakes and some of the most stunning scenery in the west of Ireland. The island measures 1.2 kms by 0.4 kms and rises to a maximum height of 63.3 meters above sea level.

There is an abundance of birdlife on the island with many types of gulls, fulmars, Manx shearwaters, petrels and oyster catchers and even a pair of peregrine falcons breeding each spring. In the autumn, barnacle geese arrive from mainland Europe and winter on the island.

That property description by MyHome.ie sounds pretty nice, which is why High Island is listed at €1,250,000 ($1,410,000). It’s also a Special Protection Area under the EU Bird Directive of special conservation interest for the Barnacle Goose, Fulmar and Arctic Tern and has many more species that stop by to roost due to it being uninhabited for decades. Artifacts date human settlement, most likely the Celts, on the island back to 300 BCE but it may have been occupied as early as 1000 BCE. During the medieval period, Christian monks began building monasteries on islands and High Island got its courtesy of St. Féchín of Fore in the 7th century CE.

While St. Féchín would likely have disproved of cursing, the cursing stone dates back to his time period. Cursing stones or bullaun are found throughout Ireland and Scotland and are thought to have been adopted from a Celtic tradition. A depression or bowl is carved or worn into the middle and there is often a cross carved in it. While they were definitely used to curse enemies, “curse” is also thought to be a variation of “cure” and many believe the rainwater collected in the bowl has healing properties. 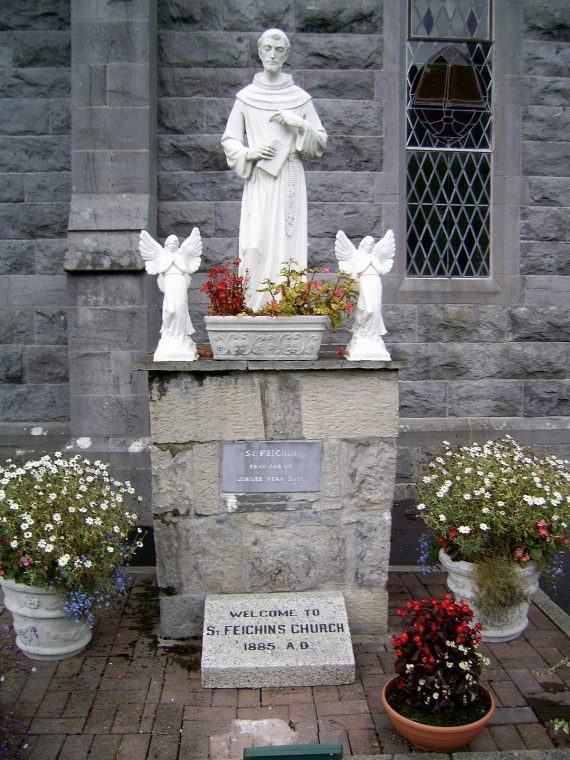 That brings us back to St. Féchín. While it appears he died from the plague on High Island on February 14, 664 [665], (his feast-day is celebrated in Ireland on the January 30th), his legendary feats are more associated with Fore Abbey in County Westmeath in the Irish midlands. Specifically, there are Seven Wonders of Fore that are associated with the saint.

The abbey named after him is built on a bog.
The local mill was built without a water source, which the saint then created by sticking his staff into the ground.
The stream he created runs uphill.
Wood from an ash tree on the grounds doesn’t burn.
Water from a well that the saint bathed in has healing powers and doesn’t boil.
A hermit or religious recluse disappeared into the stones of his cell.
A 2.5 ton lintel or support stone for his church was lifted and set in place by St. Féchín alone.

Impressive … and unbelievable? Like the cursing stone, scholars believe the legends – particularly the healing well – were adopted from Celtic legends to help convert the ‘pagans’ to Christianity. Whatever the reason, they help draw tourists to Fore and will hopefully draw them to High Island as well – Myhome.ie recommends it as an “Investment opportunity.” Sounds like a great place for a big St. Féchín's Day 'Doom Your Enemies Cursing Stone' party or a small music festival.

Interested? Beautiful pictures and more details can be found here.

The Most Dangerous Octopus Of All