Another Mothman Sighting Reported in Indiana

Mothman is the colloquial name given to the winged humanoid creature that reportedly appeared in Point Pleasant, West Virginia during 1966 and 1967. Besides the true strangeness of the mothman sightings, the point pleasant case is forever accented by the collapse of the Silver Bridge in 1967 that claimed the lives of 46 people, solidifying the mothman as a bringer of bad omens in modern American folklore.  In 2017, mothman sightings began again, this time in Chicago, Illinois. Lon Strickler, owner of the website Phantoms and Monsters, collected 55 reports from the Chicago area during that period. Further investigation uncovered mothman sightings around lake Michigan dating back to 1981. The reports described a large winged humanoid, with a face of some kind, and glowing red eyes. Described as either a bat-like or insect-like creature, the sightings matched the original descriptions of the mothman first seen in Point Pleasant. Now it seems like this creature or specter or hoax or guy-with-a-jetpack is back again. Recent reports have come out of a very similar creature in Indiana on the same highway that ran over the doomed Silver Bridge in Point Pleasant, West Virginia.

According to Lon Strickler who compiled the 2017 Chicago reports, the witness (identified by the initials TH) contacted him via telephone in January and described a sighting near Muncie, Indiana, just south of the Prairie Creek Reservoir. Muncie is just about halfway between Point Pleasant, West Virgina and Chicago, Illinois. According to TH, the sighting occurred on December 26, 2018. he and his wife were driving on U.S. 35 when he saw a "huge winged humanoid" fly overhead. According to the report:

TH is a military veteran, hunter, trapper and farmer who lives in the immediate area. His knowledge of military flying craft, wildlife and his keen sense of observance was apparent while I talked to him. The winged being that he was observing was unlike anything he had ever seen before. The creature was flying just above treetop level and was easily visible to the witness. His reaction was to slam on his brakes in wonderment, exclaiming to his wife 'do you see that?' His wife was shaken by the sudden stop and was unable to react fast enough to see the winged being.

TH stated that the being was humanoid in shape with an obvious 'face.' The body had a length of approximately 6-7 feet, with bat-like wings that were extremely wide. The being was dark-colored, and seemed to glide at a steady speed. He never noticed the flapping of wings while watching the creature. 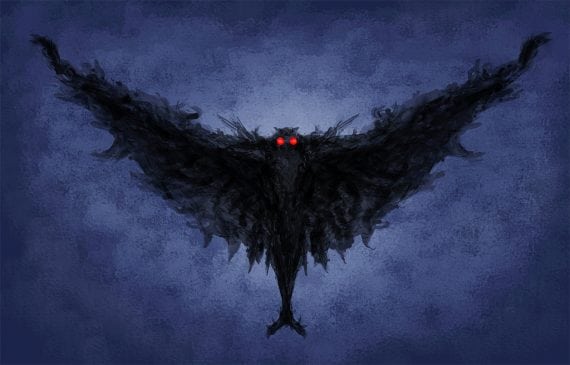 Strickler also noted that the witness' wife said that TH was "truly affected" by the encounter and constantly wanted to discuss the incident with her, yet had told no one outside his family. After hearing of other reports, he contacted Strickler with his own account.

The deep emotional imprinting is common with mothman sightings. If it is some sort of omen than that would make sense, of course. Whether this is an actual sighting of a winged, humanoid, supernatural creature is obviously pretty hard to prove even if it's not simply a made up story. Witness testimony is notoriously unreliable. However, it should be noted that soon after this incident the great lakes region of the U.S was hit with the "polar vortex," plunging temperatures into the -40 degree Fahrenheit range. According to the BBC, the cold snap was responsible for at least 22 deaths. Was the mothman again signalling bad times ahead? Likely not, but still it's a weird sort of coincidence.

Accident or Conspiracy? A Strange Tale