As the New Horizons space probe bid goodbye to Ultima Thule (aka 2014 MU69 or the Snowman object in the Kuiper belt), it sent a  set of pictures that caused a WTF heard around the solar system – or at least around the space centers monitoring the travels of the little spacecraft that has already given us stunning views of Pluto. The new images of Ultima Thule show that it’s not shaped like a spherical snowman but more like two odd-shaped flat pancakes connected at one end on a tight griddle. Or is it more like NASA’s description of a "giant pancake" attached to a "dented walnut"? Where are these engineers eating breakfast? 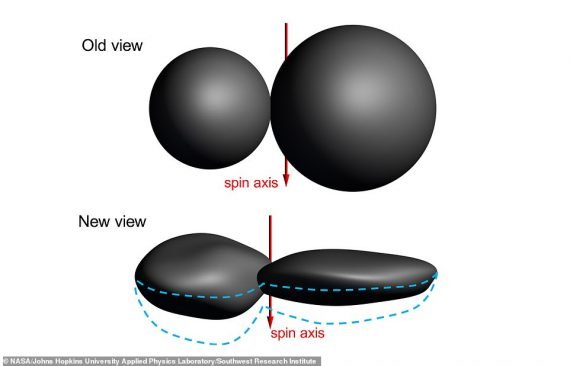 “This really is an incredible image sequence, taken by a spacecraft exploring a small world four billion miles away from Earth. Nothing quite like this has ever been captured in imagery.”

Mission Principal Investigator Alan Stern, of Southwest Research Institute admits this trans-Neptunian, contact-binary, Kuiper Belt Object (KBO) is unique … but a dented walnut? That’s the smaller “Thule” part, which seems to be a little thicker than Ultima. How did the researchers discover that Ultima Thule isn’t a snowman anymore? By its shadow, or more accurately, the blackout it made as it blocked out the light of the stars behind it as New Horizons was taking its parting shots. To make it look way cooler, NASA combined a dozen or so images into a video that simulated the New Horizons flyby.

“This will undoubtedly motivate new theories of planetesimal formation in the early solar system.”

Hal Weaver, New Horizons project scientist from the Johns Hopkins Applied Physics Laboratory, anticipated your next question, and yes, it’s a “this changes everything” moment … and there may be more. Even though New Horizons passed Ultima Thule over a month ago, it’s going to take up to 20 months for all of the data it captured to be sent back to NASA. In the meantime, the researchers will be crunching the current data, sharpening the pictures and trying to figure out how this odd-shaped, contact binary object happened. Undoubtedly, so will the Flat Earthers.

Does it mean a name change for Ultima Thule? It’s stuck with 2014 MU69 and Snowman doesn’t fit anymore, but Ultima Thule is an unofficial nickname that’s not permanent. What should it be? The Flying Tortilla Brothers? Interplanetary House of Pancakes and Walnuts? Flap-Jacked?

Any suggestions? Go have breakfast first.

New ‘Scary Known Unknown’ Asteroid Could Be One of Many