You know the world is upside down when the news that a politician is stepping down because of offensive cultural remarks is pushed out of the headlines by the news that the same politician believes the Earth is flat. Forget science tests … is it time to consider entrance exams for running for office?

“Who decided that Earth was round and why believe him?”

There you go again, Nathalie Lemieux. Now you’ve offended people who believe the Flat Earth theory could have been developed by a woman. Ms. Lemieux is, or was, the deputy mayor of Gatineau, the fourth-largest city in Quebec. She was stripped of that office for making a comment (not the one quoted above – I’ll get around (aflat?) to it next) to the CBC that she didn't believe Islamophobia exists and didn't recognize the word. While she later apologized for this offensive comment, that was enough for Gatineau Mayor Maxime Pedneaud-Jobin to fire her as deputy mayor but let her keep her job as councillor -- because apparently that's how they roll in Canada.

What’s worse than losing your job? These days, it’s putting yourself in the sights of trolls who dig deep into your social media past and find other things (or photos – enough said) that will bring further embarrassment and/or notoriety. In Lemieux’s case, that led to an online comment she made two weeks ago implying that she believes the Earth is flat and that information is being covered up by a conspiracy of Round-Earthers. As expected, this became the really big news.

"First question to ask yourself is why now that people realize that it is possible that the Earth is flat they want to hide the explanations that prove it? How much money is diverted to NASA? Who decided that Earth was round and why believe him? So many questions. Personally I do not believe anything of what I watch on news and I always do research. The world is a stage and several actors have fun at our expense thinking to be smarter than us. It's time for it to change."

First off, don’t go dragging NASA into it when you’ve got your own Canadian Space Agency (CSA) with astronauts who have been to the International Space Station and stared down at the surface of the Earth which doesn’t get its curves from exercise or a lens distortion. If you’re not going to believe the news (should we believe your press release?), then science seems like a good alternative for the “research” you claim to “always” do. Ever heard of Pythagoras? Or do you eschew the Greek philosophers and mathematicians in favor of the modern Celtics like Kyrie Irving? Perhaps she can use some of her newly-acquired free time to book a berth on the upcoming Flat Earth cruise to the edge of the world. 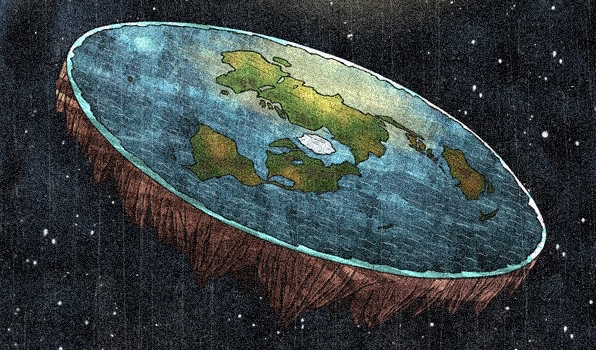 It’s possible that Lemieux brought up her Flat Earth views as a way to show that it’s OK to be skeptical about things. And it is … as long as those things aren’t scientific facts or well-documented research (which she supports) on the destructive effects of cultural and racial hatred and discrimination. Lemieux deserved to be reprimanded for her comment on Islamophobia. It’s too bad the comments on a Flat Earth didn’t come out first. Many of the problems the world is facing come from leaders ignoring science (even in Canada!) to the detriment of the health and well-being of their citizens, who are forced to leave for countries where science is hopefully a tool for the betterment of all (a group that keeps getting smaller).

If leaders like Lemieux are skeptical about the Earth being round, what other facts do they question? Maybe it IS time for a political entrance exam.

Africa Was Once Home To Ice Streams