The world’s inevitable march towards a war in space continues this week as China’s state-owned Science and Technology Daily newspaper reports plans for terrifying-sounding orbital solar power stations. According to the paper, Chinese scientists have developed plans to construct small orbiting solar plants which could be put into orbit in the stratosphere as early as 2021 or as late as 2025.

Unlike solar power farms down here on the surface of the Earth, solar farms in orbit could collect solar radiation 99% of the time as opposed to only when the Sun is out and unobscured by cloud cover. In addition, the higher altitude means the plants could generate up to six times the amount of power as solar farms on the surface do. “So wait, what’s so scary about space-based solar farms,” you ask? The fact that the plants will send the Sun’s energy back down to Earth via massive lasers or microwave energy beams. Say it with me now: what could go wrong?

I’ll tell you what could go wrong. For one, the risk of accidents would be enormous. A giant laser shooting gigawatts of energy downward from 36,000 kilometers above the ground doesn't sound like the kind of thing I'd like above my head, thanks. The same technology that could direct energy into power plants on the ground could theoretically also be used to do what lasers and other directed energy weapons do best: light stuff on fire in magnificent fashion. Still, whether or not the power plants will be used or even could be used as a weapon remains unknown. I’m probably just being hyperbolic and overly skeptical of China’s plans for space; so far, these solar farms have only been discussed in terms of their ability to produce clean, renewable energy.

Still, the possibility of weaponization of this technology, however small, is there. Furthermore, this announcement comes on the heels of many recent developments which seem to suggest that China, like the rest of the space-faring nations, is actively militarizing or weaponizing space under the guise of scientific development. 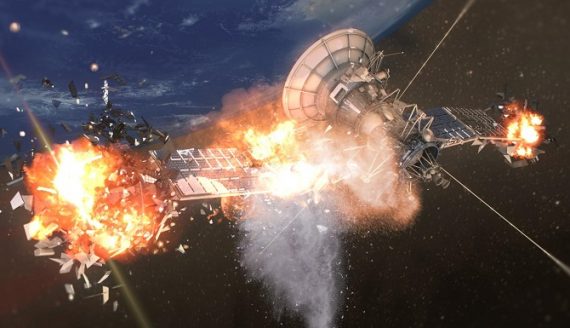 Already, military intelligence agencies in the United States suspect that China’s plans to develop scientific research stations on the far side of the moon may have ulterior motives and that China’s plans to clean up space debris with laser-equipped probes may be a ruse to develop killer satellites capable of bringing other nations’ communications and defense capabilities to their knees. Is this solar farm idea an entirely peaceful way to harvest clean energy, or might these some day turn out to be solar-powered superweapons?