When the CIA released millions of declassified documents in 2017 and placed them in a searchable online database, it was expected that some seriously spooky stuff would turn up. It’s public knowledge that the CIA has conducted research into all sorts of paranormal or otherwise anomalous phenomena ranging from psychic abilities to UFOs, but a new trove of documents discovered among the millions of files has revealed the US intelligence agency even once went looking for the legendary Yeti in the mountains of Nepal. Was the ever-elusive abominable snow man-ape ever found? 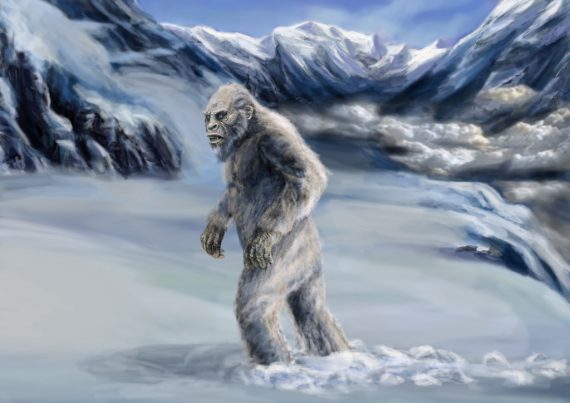 Who knows; after all, the CIA likely released these documents merely to placate the public under the guise of transparency and is withholding the really good stuff in dusty warehouses full of the world’s higher mysteries and secrets. Still, these new documents add to a growing body of evidence showing that the CIA may take paranormal phenomena or entities including the Yeti seriously - or at least purport to in order to cover its tracks.

The documents were unearthed and posted online by Amish Raj Mulmi at the Kathmandu Post. In addition to the Yeti documents, the files show that the CIA took interest in at least seven different sightings of unidentified flying objects above Nepal and Bhutan in 1968. The unidentified objects described in the reports range from a “white light” emitting “blasting sounds” and “white smoke” to fast-moving cigar shape objects reminiscent of many other UFO sightings from the time period. Here are the “Particulars of the Object” from one report from 19 February, 1968:

A fast-moving object, long and thin, emitting red and green bright light, as bright as to cause daylight. Thunder sound heard after few second of sighting object.

Sure sounds an awful lot like a ballistic missile test or high-altitude aircraft breaking the sound barrier (aircraft typically have red and green navigation lights on the left and right wingtips, respectively). That would make sense given the historical and political context surrounding these sightings, which happened at the height of US involvement in the Vietnam War and at a time when the relatively newly-formed People’s Republic of China was ramping up their missile research, nuclear weapons program, and domestic aircraft production.

Naturally, then, the CIA would have wanted to document any sightings of anomalous aerial objects in case they might shed light on what the Chinese or Soviets were up to in the skies above the region. One report even mentions that  "huge metallic disc-shaped object with a six-foot base and four feet in height was found in a crater" at the foot of the Himalayas. Could this have been a crashed Soviet or Chinese aircraft or missile, or something stranger?

The documents discovered by the Kathmandu Post also contain a cable sent 30 November, 1959 from the American Embassy in Kathmandu to the Department of State in Washington, D.C. The document outlines America’s official “Regulations Governing Mountain Climbing Expeditions in Nepal - Related to Yeti” and describe what American personnel conducting so-called “Mountaineering and Scientific Expeditions in Nepal” should do in the event of contact with the Yeti:

1. Royalty of Rs. 5000/- Indian Currency will have to be paid to His Majesty’s Government of Nepal for a permit to carry out an expedition in search of ‘Yeti.’

2. In case ‘Yeti’ is traced it can be photographed or caught alive but it must not be killed or shot at except in an emergency arising out of self defence. All photographs taken of the animal, the creature itself if captured alive or dead, must be surrendered to the Government of Nepal at the earliest time.

While hardcore ‘Squatchers may point to this document as proof of the US government’s knowledge of the legendary Yeti, it very well may be that these cables were actually using the Yeti to hide the true nature of these alleged “Mountaineering and Scientific Expeditions.” In the late 1950s, the CIA and the US government were deeply concerned with the spread of Chinese communist forces throughout the region as the Chinese were actively asserting their presence along the border with Nepal. It could be that the Yeti hunt was actually a cover for spies to keep tabs on the PRC's activities in the region. It's known that the CIA and other intelligence agencies often use “scientific expeditions” as a cover to send agents into the field; if you replace every instance of “Yeti” in the document with “Chinese spies or scouts,” these cables begin to make a lot more sense.

While these documents are far from a smoking gun, they may show how the government study of anomalous phenomena can be used to mask the true purpose of the CIA's or other agencies' intelligence gathering activities. Could the CIA actually have been hunting the legendary Yeti and gathering reports of truly unidentified aerial phenomena? It’s possible - but it’s highly more probable that they were keeping tabs on the USA's favorite frenemy, the PRC. What might these documents suggest about the Pentagon's modern day study of UFOs?

California Man Claims Van was Flipped Over by Extraterrestrials