From Urban Legends to Forteana

Just recently I was asked if, one day, I might write a book on the matter of urban legends. Certainly, they are most definitely inextricably linked to the world of Forteana. But, my answer is "No." Why not? Well, because in my opinion the ultimate book on the subject has already been written. It's Paul Screeton's Mars Bar & Mushy Peas, published by Bob Trubshaw's Heart of Albion Press. The book is far more than a few years old now, but I figured - if you haven't seen it - why not bring it to your attention now? After all, you can learn just about all you need here when it comes to the nature of urban legends and ties to Forteana. Paul's book is a hilarious, illuminating and superb dissection of the world of urban-legend as it relates to the famous-faces of television, film, the rock music industry, the pop world, and even Fanny Craddock (non-Brits may wonder who on earth I'm talking about here - which is a very good reason for you to get acquainted with the book!). It's important to note that although the book is predominantly based around the world of the rich and famous, it's very insightful when it comes to the matter of how urban legends begin, take off, and sometimes become seen as absolute fact. 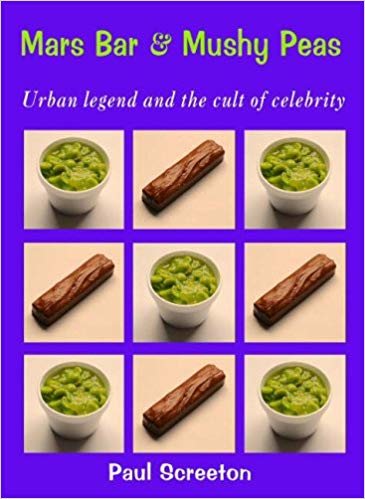 It's clear from his writings that Paul has a deep affection for, and a fine appreciation of, the whole urban-legend phenomenon - as well as a keen understanding of how and why urban-legends begin, spread and then very often become accepted as the gospel truth. Of course, whether there is any truth to the stories, or perhaps how much, is one of the staple points of the subject and of Paul's book. This is a very funny and entertaining book, and I laughed out loud on many occasions reading it - and you will, too! So, what do we find within the pages of Mars Bar and Mushy Peas? Well, let's start with the title. The Mars Bar episode is, of course, that which has become inextricably linked to 60s celebrity Marianne Faithfull who - urban-legend suggests - was once, as the book words it, caught in a "perverted sex act with a chocolate bar."

True? Nope! But, as with all urban-legends, the story has taken on a life of its own, and is now truly multi-faceted: Jagger & Richards, the cops, the press and more all feature in this saga that is almost certainly destined to never go away; at least, not completely. But, as Paul notes, that's the point with urban-legends: they're tenacious critters that spread and multiply like rabbits! And, such tales mutate, too: moving on from Mars Bars, we hear other entertainingly amusing stories/legends of unusual items being placed into certain celebrity orifices; including gerbils. Yep, MB&MP gets better and better as the pages turn!

As for the Mushy Peas saga, well, if only it could be true! And maybe, partly, somehow, possibly...it is! Or isn't! Things are never quite clear in the world of the urban-legend. But would we really have it any other way? No, not when it comes to this particularly mushy matter. This is the legendary story of British politician Peter Mandelson allegedly mistaking a fish-and-chip shop's supply of mushy peas for a bowl of posh avocado mousse. Did he? Didn't he? I don't know, but I do know that the story has more lives than a cat, and that it seems to forever hang around Mandelson's shoulders like a veritable sword of Damocles. It takes a skillful writer to make a whole chapter on a bowl of mushy peas readable, informative and smile-inducing at every given moment; but Paul manages it. I strongly doubt, however, that he's on Mandelson's Christmas-Card list...

We are also entertained by countless other "if-only-they-could-be-true" stories concerning (in no particular order) U.K. TV magician Paul Daniels's wife Debbie McGee and a dog; actress Diana Dors and the tales generated by her real name; the "Paul McCartney is Dead" affair; the Captain Pugwash controversy (a bit of Googling will enlighten you!); the aforementioned Keith Richards and his dad's ashes; an excellent section on Forteana and Charles Fort himself (this chapter, alone, should be firmly digested by anyone and everyone with an interest in urban-legend, the world of the unexplained and the development of stories, tales and mythology); Greyfriars Bobby; the Global-Warming/climate-change controversy, and much, much more. In conclusion, Mars Bar and Mushy Peas is absorbing, thought-provoking, and deadpan funny in the process. That the author not only has a deep knowledge of the cases that he highlights, but also a fine appreciation of the whole urban-legend phenomenon, makes MB&MP a witty, wonderful and informative title.