It’s not every day that a Pulitzer-prize-winning journalist says he got to take a ride on a flying saucer… but that’s precisely what happened to Hal Boyle, a syndicated columnist who wrote articles that appeared in more than 700 newspapers during World War II.

Well, that’s sort of what happened, but we’ll get to all that.

A journalist who, during his three-decade tenure with the Associated Press wrote more than 7,500 columns, Boyle’s career began in Kansas City in 1928 as a copy boy with the AP Bureau. He was serious enough to pursue his journalistic talent, and enrolled at the Junior College of Kansas City, later heading on to the University of Missouri, where he completed his studies in journalism. Shortly thereafter, Boyle began working for the Associated Press out of Saint Louis, and then transferred to New York in 1936.

Boyle continued his correspondence throughout the Second World War, for which he received his Pulitzer Prize in May 1945. It was not the last award he would receive for his reporting: Boyle went on to receive the Omar Bradley Award for his coverage of the Korean War.

However, it was shortly after World War II that the “flying saucer” craze erupted onto the American scene, with Kenneth Arnold’s now-legendary report of seeing a group of objects dodging and weaving between mountain peaks near Mount Rainier in June of that year.

A story as juicy as this was hardly anything Boyle could resist.

Tuesday, July 8, 1947, was an important day in the history of flying saucers, to say the least. That morning, the mysterious discs had been front page news in a number of American papers, although one particular story--that of an alleged saucer wreckage recovery in New Mexico that appeared in the Roswell Daily Record--would ultimately stand out among them.

However, that same day the Associated Press carried another story that, in many ways, even rivaled the curiosity of the Roswell story. It was now Hal Boyle who was reporting on the saucers, and not just sounding off about them in his syndicated column. Having reportedly been missing for two days, Boyle now claimed he had been aboard one of these remarkable aircraft.

“Our Hal Boyle, returning from a two-day absence, insists he is the first man to come back alive from a trip on a ‘flying saucer’,” an Editor’s Note read at the beginning of Boyle’s regularly syndicated column.

Here, it would only do Boyle’s story justice to hear how it all went down in his own words:

“Here I am in the middle of [a flying saucer], zooming around the American landscape like a boomerang. These things aren’t discs or saucers at all. They’re built like a cowboy hat seven-stories tall.

"The reason you folks down below have been disagreeing about the size is you haven’t seen the whole thing. All you have seen is the reflection of the sides where patches of the infra-invisible paint were burned off these huge space ships as they passed too close to the sun on their way here from Mars.

“Yes. Mars! I am a prisoner aboard a 1947 model “flying saucer" from another planet.”

Boyle’s fantastical adventure began in, of all places, the New York Public Library (was this a possible nod to Forteans in his readership? After all, this was the very same locale where Charles Hoy Fort spent his long hours looking for clippings that smacked the face of modern science, as he saw it, offering plausible proof of anomalies in our midst).

In another of Boyle’s dispatches, he detailed just how it came to pass that he would end up aboard a flying saucer:

I left the New York Public Library at dusk the other day and dropped into a quiet bar to wash down a warm vitamin pill with a cold bottle of beer.

Finishing it, I turned to a silent figure sitting next me—the only other customer at the bar—and all but fainted. I saw a thing some eight feet tall, covered with thick green hair, with one eye a hard-boiled egg in the center of his forehead, and no visible mouth at all. He was naked, his hands were three-clawed and big enough for a Brooklyn center fielder.

Up until this point, it still seems plausible at least that Boyle had merely run into a New York regular… albeit one who had perhaps done a few extra laps in the Hudson, and bathed in the wastewater microbes dwelling there. However, what transpires next removes all doubt that Boyle’s new acquaintance was of the extraterrestrial variety:

The Green man’s yolk - yellow eye burned menacing red. One hand twisted one of a series of knobs on his chest marked "slang, American,” and noiseless words drifted to me:

“Scram, Mac. But take along some beer. You’re going on a long ride.”

Then I found myself lifted and tossed sprawling. There was the sound of a door closing and a sense of lifting rapidly into space. I scrambled to my feet and looked out the window—its infra-invisible paint is only invisible when you look at it from the outside. Manhattan was falling away beneath us like a toy town. “Well, how do you like your first ride in a flying saucer, Orson Welles?” leered the green man. “You’re on the way to a place where there are more Martians than there ever were in New Jersey.”

“You may take his story or leave it,” Boyle’s editors wrote of his alleged ordeal. “But we are turning down his expense account for $2,880 — which is what five cents a mile comes to after 48 hours in his 1,200-mile-an-hour conveyance.”

Whether you're a hopeful skeptic or a doubter among believers, it would be awfully hard not to see the humor in a yarn of this magnitude. 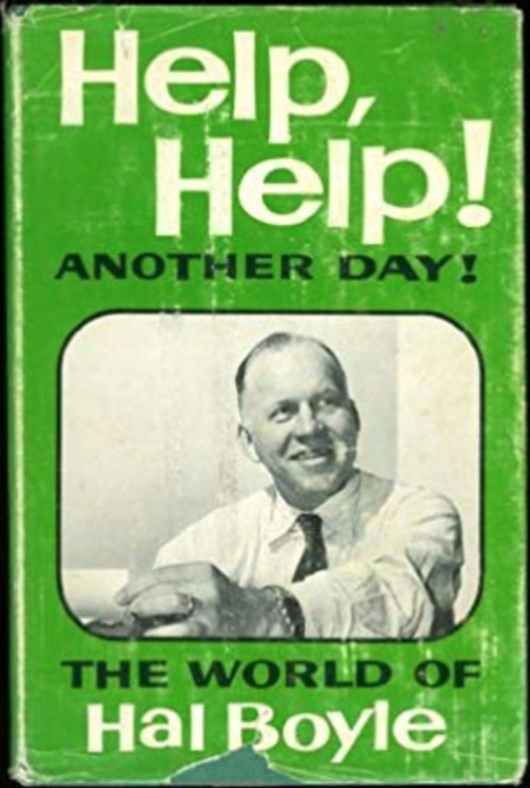 Of course, while Boyle was merely poking fun at the flying saucer stories, this no doubt was met with distaste by the hopeful, early UFOlogists trying to see past the novelty of these reports, and discern whether a genuine mystery might have been present. However, there are a few interesting takeaways from our look at Boyle’s once famous, and now nearly-forgotten flying saucer “hoax” (I use quotes here since, while Boyle’s story was not true, he no doubt expected his readership would know this, and hence had not intended to mislead anyone).

Of course, there is some debate as to when, precisely, the flying saucers (which, being in the pre-Blue Book era, were not yet called UFOs at this time) began to be almost explicitly associated with the idea of extraterrestrials. Many suggest that this wasn’t truly the case until after publication of a lengthy article by Donald Keyhoe in True Magazine in 1950, where he laid out the case that an extraterrestrial source seemed most likely.

However, as with Boyle’s saucer “hoax,” we see that even before the public had time to speculate about what had (or hadn’t) happened at Roswell, New Mexico, in early July, people were insinuating that the occupants might be extraterrestrials right off the bat. In fact, even prior to Boyle’s spoof column, a June 30th, 1947 UPI article made reference to a silver-ball-shaped aircraft observed over Lexington, Kentucky, as being “Martian-like.” Indeed, it seems that insinuations about extraterrestrials were indeed taking off with the saucers almost in tandem with Arnold’s initial report, and subsequent reports of similar things in the days that followed.

Legendary newspaperman though he was, many today are probably unaware of Hal Boyle, apart from those still alive who may have read his columns decades ago (many of which were later anthologized and published as books). In his prime, however, Boyle was one of the most prolific and revered writers in American journalism, which makes it all the more interesting that he was, essentially, also one of the very first major media personalities to poke fun at UFOs, and even speculate about their “extraterrestrial” nature, in the early days of the 1947 saucer craze.