Hundreds of Mysterious Ancient Structures Found in the Sahara Desert

Archaeologists working in the Sahara have published their findings outlining the discovery of mysterious stone structures found scattered throughout the world’s largest desert. The structures come in various shapes and forms and appear to date back thousands of years, although researchers still aren’t sure when they were build or what their purpose may have been.

“The archaeological map of Western Sahara remains literally and figuratively almost blank as far as the wider international archaeological research community is concerned, particularly away from the Atlantic coast," write the University of East Anglia’s Joanne Clarke and independent researcher Nick Brooks, authors of a new book outlining their work studying these unknown and mysterious structures. Clarke and Brooks spent the better part of a decade studying these structures between 2002 and 2009 and have cataloged hundreds of them ranging from straight lines to rectangular platforms to giant circles or crescents. One structure appears to be a combination of smaller forms including lines, stone circles, and platforms, forming a structure over 2,000 feet (600 meters) long. 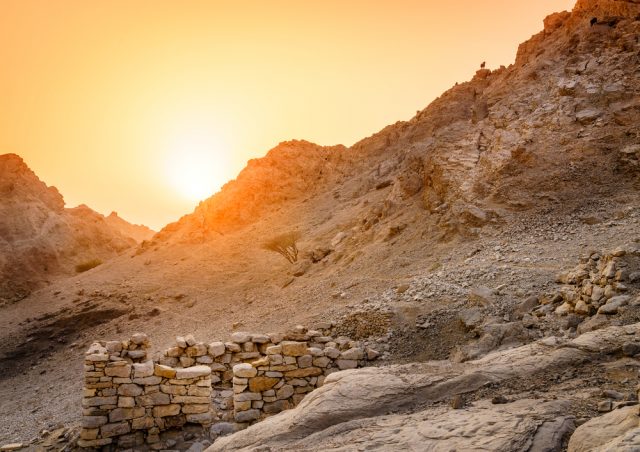 Some of the structures are thought to mark the location of graves, although most of the structures remain a complete mystery until further research can be conducted. Due to security concerns, however, archaeologists are unable to venture into the area due to the fact that terrorist groups like al-Qaeda operate in the region and are known to kidnap outsiders. For now, these structures will remain an enigma until the Western Sahara can be effectively secured.

While we’re just beginning to scratch the surface of what may lie beneath the shifting sands of the Sahara, these preliminary discoveries only further highlight how many chapters of hidden or unknown history may have been lost to the sands of time. The Sahara is full of mysterious ruins like these stone structures which hint at long-lost knowledge and civilizations. Could the Washington Monument or Eiffel Tower one day fall into ruin only for the historians of the future to puzzle over?

Perhaps the sonnet “Ozymandias” (1818) by Percy Bysshe Shelley can sum it up best:

I met a traveller from an antique land

Who said: Two vast and trunkless legs of stone

Stand in the desert... near them, on the sand,

Half sunk, a shattered visage lies, whose frown,

And wrinkled lip, and sneer of cold command,

Tell that its sculptor well those passions read

Which yet survive, stamped on these lifeless things,

The hand that mocked them and the heart that fed;

And on the pedestal these words appear:

'My name is Ozymandias, king of kings;

Look on my works, ye Mighty, and despair!'

Nothing beside remains. Round the decay

Of that colossal wreck, boundless and bare

The lone and level sands stretch far away.

What will the historians of the future make of our crumbling, irradiated stone and metal structures after we're vaporized to dust?