Investigating a Tale of a Crashed UFO

"So, what do you think about the Berwyn Mountains UFO crash?" I was recently asked. The strange affair in question dates back to 1974 and the mountains of North Wales. And, it's now time for me to answer that opening question. Back in the 1996-1999 period, when UFOs were all-dominating on the  newsstands of the U.K., and when Mulder and Scully were still flying high, much page space was devoted to a strange and genuinely intriguing event that had occurred on a Welsh mountain one dark, winter night in January 1974. For many people of a "The Truth Is Out There" persuasion (in the 1990s, at least), this curious affair was seen as being nothing less than a potential "British Roswell" - or a "Welsh Roswell" would be far more accurate. Stories of whistle-blower testimony collectively suggested that perhaps an alien spacecraft had crashed on North Wales' Berwyns Mountains range. The craft and crew were said to have been retrieved undercover of the utmost secrecy by elements of the British military and government. And, I have to admit, that at the time in question ('96-'99) I was a fully paid up member of the "I Want To Believe" club, and I gave space to the incident in my books A Covert Agenda. I was most certainly not against the idea that E.T. might have really crashed and burned on the Berwyns all those years ago. But, times and minds change. 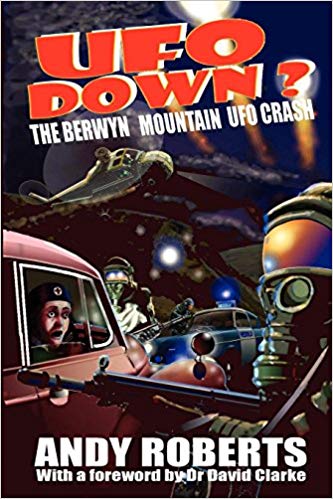 It was, as the '90s breathed their last, that Andy Roberts (to some - including me - a genuine Fortean sleuth, to others a spoiler of ufological fun, and to more than a few, a tool of disinformation agents in the government...YAWN) came along with a preliminary paper on the Berwyns affair. Andy suggested that the Berwyn affair was nothing more than the result of mistaken identity, coupled with a localized earthquake and a meteor shower - on the same night and in approximately the same time-frame. Of course, the true-believers moaned that Andy was following some nefarious agenda, courtesy of the Men in Black - the dreaded "them," in other words. And, those of a different persuasion gave Andy a collective pat on the back. Especially so when Andy's book UFO Down? was published.

I have to say, that - given the fact that UFO Down? still represents the only full-length book on the case - Andy did an excellent job of finally digging deep into the many and varied complexities of the affair and coming to a satisfying conclusion. Interestingly, though, it actually leaves the door open to one or two potentially Fortean anomalies having played some sort of presently-unclear role in the case. But, with that said, Andy's was an excellent study of how and why myths, legends and rumors all played roles in carefully creating and nurturing an admittedly fascinating series of separate events into the tale of a crashed spacecraft from a far-away world.

Easily worthy of a case for Holmes and Watson - and, particularly so given its ingredients of a dark, imposing and windswept mountain-range; little isolated villages; "phantom helicopters" prowling the moonlit skies; claims of deep and dark secrets; and shadowy and sinister Men in Black-like figures said to be roaming the landscape by day and night - the Berwyn story is one that is truly as fascinating as it is one filled with wild twists and turns. All that's missing is a ghostly black hound with glowing red eyes! Packed with accounts of strange lights on the mountain, an alleged heavy British Army presence, alien bodies recovered at the "crash" site, meteorites, earth tremors, ghost-lights, official files and more, this is a book that anyone and everyone interested in UFOs (and particularly tales of crashed UFOs) should acquire a copy of at the earliest opportunity.

UFO Down? demonstrates how an investigation of such an event should be undertaken, even if the conclusions aren't what some solely belief-driven souls wish to hear. Well, too bad. Andy went to the places, spoke to the witnesses, chased down the government files, and traveled to where the evidence led him. And, if and when someone else decides to do likewise and comes to a different conclusion, then I'll take a look at that evidence in its own right. But, right now, we have in my opinion a first-class, true-life detective-style story that tells the truth of the Berwyn affair (or, as close to the truth as we're likely to get) and reveals its complexities to the extent that we're able to.

Crashed UFO-themed books are filled with tales of Hangar 18, alien bodies on ice, and extraterrestrial autopsies. UFO Down? is a very different addition to the field of crashed UFO titles, but in a refreshing, welcome and - most important of all - informative and illuminating fashion. Whatever your views on all things saucer-shaped and crashed, you should buy this book. You will learn a lot - about those aforementioned crashed UFOs, but also about why and how the British UFO research community of the 1990s arguably needed its very own Roswell, and how and why belief systems and eyewitness perception may be the most important facets of certain, challenging, alleged UFO events.