Legendary Footbridge to King Arthur’s Tintagel Castle to be Rebuilt

Arthurian legend fans know that there would be no King Arthur without the footbridge connecting the two parts of the rock that Tintagle Castle was built on. With a drawbridge in the middle, it was the way Uther Pendragon reached Queen Igerna and conceived Arthur … or so the version of the legend as written by Geoffrey of Monmouth (“The History of The King's of Britain”) goes. That part may be myth, but the castle is real as is the gorge between the two parts. What’s missing is the bridge, which collapsed about 500 years ago and has never been replaced … until now. A wealthy couple has donated £2.5 million ($3,261,000) to English Heritage to help build a new footbridge, allowing tourists to make the crossing without a dangerous climb down and up the gorge. Will some of the money be used for a B&B where couples can recreate the creation of Arthur? That alone could pay for the bridge entirely.

“Thanks to Julia and Hans Rausing’s generosity, people will be better able to understand and enjoy Tintagel Castle. It is an inspiring gift for an inspiring site and we are extremely grateful to them.” 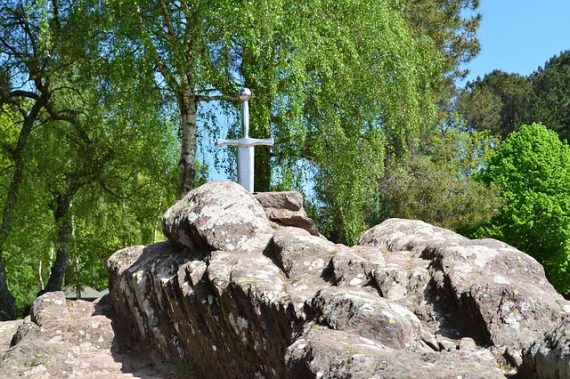 Tetra Pak (a multinational food packaging and processing company ) billionaire Hans Rausing married Christie's art expert Julia Delves Broughton in 2014. Rousing is a controversial figure who is rebuilding his reputation through philanthropy after scandals involving his own heroin addiction, the death of his wife due to drug addiction and the fact that he hid her death for two months and was later convicted of preventing her lawful burial. Could his own rehabilitation through his second marriage to Broughton have motivated him to donate to this legendary romantic site? That would be inspiring, but not enough to cover the other controversies and protests surrounding the building of the bridge.

"We consider that the footbridge would give rise to significant adverse landscape and visual impacts. The proposed development would introduce a significant engineered structure into what is at the moment a natural landscape, characterised by its ‘exposed coastline of complex slate and shales geology with rugged high cliffs with coves, promontories, stacks and small islands’."

The Cornwall Area of Outstanding Natural Beauty (AONB) Unit makes a good point. The views both of the castle and from it are breathtaking and the challenge of walking the current steep footpath and small wooden bridge across the 190-foot gorge makes it even more appreciated once the visitor finally arrives at the castle. On the other hand, as befitting of a price tag that needs a $3.26 million donation along with over 1,000 smaller ones, the footbridge will be stunning in its own way, as design drawings attest. (You can see them here.) The 98 foot (30 meters) bridge with consist of two separate cantilevers with a a 1.5 inch (4cm) gap in the middle to let crossers know when they’ve reached the middle – assuming they’re brave enough to look down.

Whether you’re for it or against it, Arthurian believer or skeptics, the bridge is already under construction and will be finished in July 2019. The castle receives over 250,000 visitors a year, so that number will undoubtedly increase. English Heritage promises that any funds left over will be used at other historical sites.