Pop culture and science fiction have a strange way of working their way into the “real” world sometimes (although isn’t art ‘real’ in its own sense?). One of the weirdest instances in recent memory was the recent discovery of a real-life planet Vulcan exactly where Star Trek writer James Blish said it would be. Did he have insider information from the pointy-eared, bushy-browed logicians themselves?

That’s not the only Star Trek element to worm its way into our reality, though. Scientists inspired by the classic series are working on many different examples of technology from the franchise including tractor beams, matter replicators, photon torpedos, and tricorders. Life truly does imitate art sometimes.

Star Trek’s not alone in this sense. Many technological elements from Star Wars, the lesser of the two major sci-fi canons (bring it on, nerds), have likewise influenced scientists to attempt to make these gadgets a reality. It’s not just the technology of these franchises that are being developed; a real-life Temple of the Jedi Order religion has even sprung up worldwide in the last few decades. Now, one of the most iconic elements of the Star Wars franchise has been approved as an official sport by the French Fencing Federation. That's right: get ready for real-world lightsaber dueling. 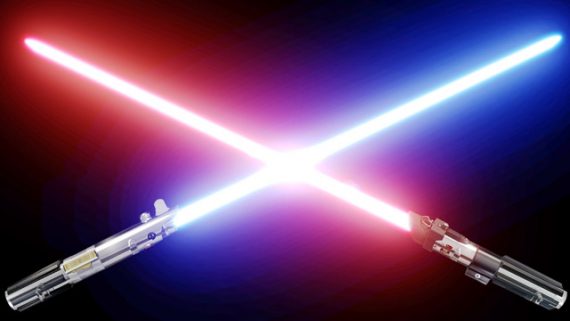 Well, not real lightsaber dueling. Rather than swinging around beams of plasma powered by kyber crystals, participants in these duels will wield plastic versions powered by AA batteries. Still, the combat promises to be exciting and a great way to get some exercise. The French Fencing Federation approved the new sport this week, citing the need to encourage more adults and children alike to get off the couch, put down Fortnite for a few minutes, and get some exercise. “With young people today, it’s a real public health issue. They don’t do any sport and only exercise with their thumbs,” says Serge Aubailly, the federation’s secretary general. “It’s becoming difficult to (persuade them to) do a sport that has no connection with getting out of the sofa and playing with one’s thumbs. That is why we are trying to create a bond between our discipline and modern technologies, so participating in a sport feels natural.”

Attendees of pop culture conventions know how popular and fun these duels can be. Thanks to the resurgence of Star Wars in recent years and Disney’s massive, world-dominating merchandising machine, the LED-lit plastic tubes have been popular on YouTube as well as lighting up dark hotel ballrooms worldwide in informal dueling sessions. Now, official rules and regulations have been established to make this informal activity a true sport.

Could lightsaber combat become an Olympic sport someday? More importantly, will this be the thing to finally help Star Wars fans get laid?