Looking at the Tricky Nature of the Trickster

When, in my early teens, I became seriously interested in the world of Forteana, most things were pretty black-and-white to me: Bigfoot were giant undiscovered apes; the Loch Ness Monsters were surviving relics of a time long-gone; and UFOs were nuts-and-bolts spacecraft from other worlds. But, as I got older my views began to change. The more I dug into the realms of alien entities and strange creatures, the more I came to realize that they were not just strange: they were too strange. And they were way too elusive. Bigfoot never get hit by cars. There are numerous cases on record of people trying to shoot Bigfoot creatures - but no body is ever found. And, there are rogue reports of Bigfoot vanishing in the blink of an eye.

Similarly, from the heart of Loch Ness, there are tales of Men in Black, ghosts, big-cats on the loose, and the legendary exploits of the "Great Beast" himself: Aleister Crowley. Could one loch really be home to such an absolute plethora of what I refer to as "weird shit"? It was the same with UFOs: always elusive. And, even if a UFO did reportedly crash, the hard evidence - the "alien debris" - was never forthcoming, or it proved nothing. And, no-one has ever been able to vindicate the legendary stories of alien-bodies held in cryogenic storage in some underground lab. The phenomena are always one step ahead of us - tricking us into following them down Fortean pathways, but always careful to ensure we never quite get close enough to solve the riddle.

And there was one other factor, too, that I came to notice: the more I dug into these various phenomena, the more I found myself experiencing weird synchronicities. The phenomena, I realized, had got their grips into me; as they had done, and continue to do, with so many others. And, if you too have deeply investigated the Fortean world, don't tell me you haven't experienced those same synchronicities. I know you have. Whatever was at the heart of the puzzle, I reasoned, deceit, manipulation and subterfuge were its calling-cards. And they still are. It all revolves around the phenomenon of "The Trickster." One of the most learned people in this field is Chris O'Brien.

People may disagree on the actual point of origin and specific nature of the Tricksters, but as Chris' research demonstrates, they are most assuredly among us. They are entities whose whole role in life, it seems, is to play games with the Human Race. Sometimes those games can be fun and even amusing. Other times, they may be enlightening and helpful. But, then, they can be downright vicious and deadly, too. They are, in other words, a true paradox. They come in many guises and disguises, as Chris skillfully shows in his book Stalking the Tricksters: aliens, Mothman, skinwalkers, pixies, elves, gods, hairy giants, angels, werewolves, ghosts, demons, vampires and much more. They are the wild-things that lurk in the shadows of our bedrooms in our childhood; they are the Sasquatch we see while driving home late at night along winding, tree-shrouded roads; and they are the predatory entities that taunt us while we're in the dream-state and at their full mercy. 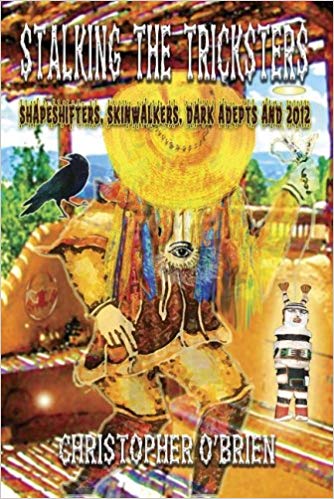 From the beginning of time and right up until the present day, Chris' findings show, these strange life-forms have been with us. Their appearance may change. Their names may change. And they may pop up in the most unlikely places. But, they're always here in some fashion; always planning their next move, before vanishing back to the weird realm out of which they first stepped. Indeed, to demonstrate these points, Chris has culled from his files countless reports of such Trickster characters as Kokopelli of the United States; Reynard the Fox; the dwarfish Alux of Mexico, and many more from throughout recorded history. The Trickster phenomenon demonstrates to us that both our world and our reality are not what they seem to be. Someone - or something - is using us as pawns in a strange, intricate and huge game. It is a game where the rules are those of the Tricksters alone. Or, perhaps, there are no rules. After all, what place can rules have for creatures that are defined by absurdity?