Earlier this month, I wrote about an Indiana man's very mothman Christmas, in which he saw a large flying humanoid near the Prairie Creek reservoir. Like many other big-name paranormal entities—bigfoot, fairies, the greys—where there's mothman, there's a heavy dose of high strangeness with him. After the recent mothman reports began circulating, other witnesses have come forward with their experiences in the Great Lakes region, including a man who has allegedly observed glowing orbs of light near the Prairie Creek reservoir for decades.

The witness contacted the Singluar Fortean Society to relate his experience. According to the 51-year-old man, his first experience with the mysterious orbs was in 1981 when he was 12:

"It was a clear summer night sky. I saw an orange/amber colored ball of light about 20 feet above the trees. It started towards me slowly so I ran in and got my mom, when we came back out it was over our trees. The actual size is hard to say but I'd guess three feet across. It was totally silent, and it moved off to the west out of sight behind the trees."

Since the, the witness says, he has observed this phenomenon approximately 12 times since 1981. The balls of light vary in colors, sometimes appearing as orange and sometimes as white. They also appear to have an intelligence behind them, the man says, as they change color, move around, and seem to react to observers.

An alleged intelligence becomes sort of a sticky wicket, as evidenced by the man's most recent experience with the orbs in the summer of 2016:

"I was driving east coming home at night, when I spotted an orb that was orange, and it seemed like a second one right next to it was changing back and forth from red to orange and dimming to dark and back. So I got to my road turning south and I came to a stop to watch. The car window was down, so I fumbled with my phone to hit record...snap, gone."

It's the old joke: what if bigfoot is just blurry? The problem is that a lot of these experiences do suggest an intelligence behind them, and an intelligence—especially an intelligence with a trickster inclination—would certainly make it as difficult as possible to take a picture of it. But it also becomes an easy out when you're just making stuff up. Which, again, fits the M.O. of a trickster intelligence. As I said, a sticky wicket.

If we are to believe—or at least entertain—this witness however, it's another piece of a large and unbelievably complex phenomenon. According to the Singular Fortean Society, these encounters occurred near a one-acre-large, 2,000-year-old Native American burial ground, on a direct line with Prairie Creek reservoir and Mounds State Park to the west, another ancient ceremonial site with legends of trickster spirits called Pukwudgies. 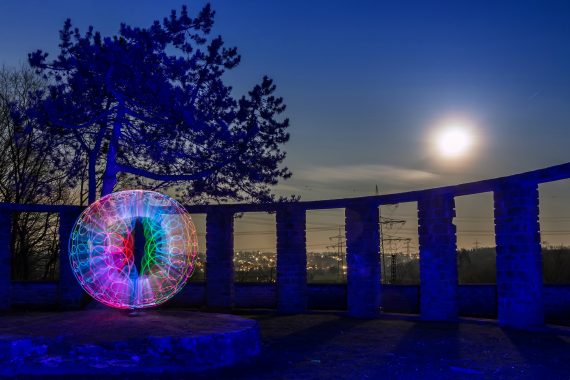 Most times someone calls anything an Indian burial ground, I can't roll my eyes hard enough. Nine times out of ten, it's a pile of rocks left by a 19th century farmer who found he had more than he needed for his stone wall. But there are actual Native American burial and ceremonial grounds. Mounds state park is one of them. However, lines are easy to draw.

Maybe the best we can hope for is a continued collection of these stories, both genuine and otherwise, and a more complete (but never finished) picture of our strange world.