Pretty much wherever one goes in the world where there is a large enough body of water there are bound to be reports of lake monsters. This strange phenomenon transcends cultural and geographical boundaries, and with so many such creatures swimming through the lakes of the world it sometimes seems that our waterways are absolutely crawling with mystery monsters. I have written of lake monsters from all over the world, and here I will take a look at some of the more well known such aquatic anomalies from the far eastern country of China.

One of the more well-known Chinese lake monsters known of by the outside world is something strange lurking in the depths of the volcanic Lake Tianchi, or Heaven’s Lake, in the isolated mountain region of the Baekdudaegan and Changbai mountain ranges on the border of China and North Korea. Although sightings of strange things in the lake go back hundreds of years, public attention was drawn to the phenomenon in 1903, when a group of three people was allegedly set upon by a massive creature similar in appearance to a buffalo, which came crashing out from beneath the waves to attack. The beast was reportedly shot six times, but survived to sink back down into the depths and disappear.

In later years another high profile report of the monster of Lake Tianchi would surface in August of 1962, when a witness observed through a telescope two large creatures seeming to play and chase each other. This set off a wave of sightings, with over a hundred people reporting seeing the monster, sometimes more than one of them at the same time, and descriptions varied from that it was some sort of giant fish to a long-necked, plesiosaur-like beast with a human sized head, with many reports making mention of a white ring around the bottom of the neck and smooth, grey skin. In more recent years there was a July, 2003 sighting made by a group of 12 Chinese soldiers, who say they saw a creature with a black head with two four-inch horns and a prominently scaled back, which they watched swimming for 2 minutes before it sank down beneath the waves. The Chinese state news agency Xinhua went on to say that the creature had been spotted an additional 5 times within a 50 minute period earlier that month.

Even more recent is spectacular video footage released in September of 2007 by journalist Zhuo Yongsheng, who was at the lake when he said he saw six of the creatures swimming in unison, which looked to be seal-like, with noticeable, very prominent fins. He managed to take 20 minutes of admittedly blurry footage of the monsters, and said of them:

They could swim as fast as yachts and at times they would all disappear in the water. It was impressive to see them all acting at exactly the same pace, as if someone was giving orders. Their fins—or maybe wings—were longer than their bodies.

There has been much speculation as to what the monsters of Lake Tianchi could be, especially since the lake is considered to be too cold and volcanic for large creatures such as what is described to survive. Ideas include some undiscovered species of whale or freshwater seal, or giant, possibly mutated fish. No one really knows, and reports of the Lake Tianchi monster continue to come in at a steady pace, especially in the summer months.

Another Chinese lake fairly infamous for its lake monsters is Lake Kanas, located in a remote mountainous area of Altay prefecture, in the autonomous northwest region of Xinjiang. The lake itself is a glacial lake, formed some 200,000 years ago in a deep valley, and is known as being the deepest glacial lake in China. It is famous for being set within one of the most scenic regions in the country, as well as for its amazing color palette, with waters that change from an azure blue to emerald green depending on the weather and the time of years, a mesmerizing effect caused by particles in the water. This has caused the lake to become quite a tourist hotspot in more recent years, and beginning from the 1980s word of something very bizarre living here began to make the news, although the creatures have been known of since the times of Genghis Khan, and said to snatch horses and cattle from the lake’s shores.

The report that really launched the phenomenon of the Kanas Lake monsters occurred in 1985, when a professor Yuan Guoying, of Xinjiang University, was visiting the lake with a group of students on a field trip. They claimed that they had seen a large group of 50 giant fish, reddish brown in color and measuring from between 33 to 50 feet long and weighing probably around 4 tons each. The creatures have been spotted countless times since, including one appearance in 2013 that was witnessed by hundreds of baffled tourists. The Lake Kanas monster is also one of the most photographed lake monsters in the world, with dozens upon dozens of photos and videos of the beast brought forward on a regular basis, although they are all inconclusive. There have also been many expeditions sent to the lake to try their hand at looking for the creatures, all of which have come up empty handed.

The most popular theory for the Lake Kanas monster is that they are outsized specimens of a species of salmonoid called the taimen or Hucho Taimen, which are known to reach lengths of over 10 feet and weigh nearly 300 pounds, although not anywhere near the sizes reported here and found exclusively in rivers. Another theory is that people are misidentifying schools of salmon, or that these are just floating logs, but no one really knows for sure.

Perhaps the most bizarre Chinese lake monsters there is comes in the form not of a giant fish or dinosaur, but that of some sort of gargantuan toad. For these accounts we go to the very rugged and remote mountains of Hubei province, in central China, also called “Wuhnan.” Here there can be found numerous deep water gorges and lakes, such as Bao Fung Lake, which would all be quite pristine and beautiful if it weren’t for the fact that these waterways are said to be inhabited by enormous, pale-white man-eating toads.

The most famous of these, which really launched the whole thing into the public consciousness, is one of the mysterious toads that was quite notorious among local fishermen and even had a name, “Chan.” This Chan was apparently quite a nuisance, attacking anything that came near its watery abode, including livestock and pets, and the locals decide to do something about it. According to the reports, the fishermen tried using explosives to get rid of the foul beast once and for all, but this backfired when the furious toad chased them far inland, snapping at them the whole way with its formidable jaws. It is uncertain what happened to our friend Chan after this, but the fishermen reportedly wouldn't go anywhere near that particular spot from then on. 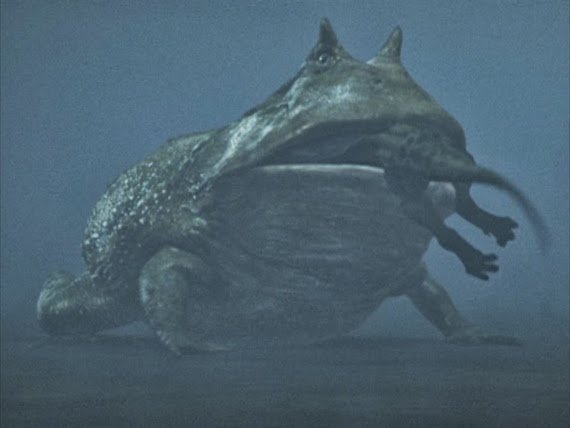 In 1987 there would be an expedition mounted to the region led by a professor Chen Mok Chun, along with nine other scientists. They were not here to find monsters, rather there to observe and catalogue the aquatic life of the area, but monsters they would find nevertheless. The report goes that they were setting up camp at one of the area’s many deep, water-filled gorges, when three immense, albino toads with mouths 6-feet wide bobbed to the surface and began swimming towards them. As the incredulous scientists looked on, one of the toads apparently lashed out with its tongue to snag a camera tripod, which it dragged into the water to try and eat. They all then unleashed some sort of unearthly shriek before descending back down into the murky water, leaving the team completely shocked at what they had just witnessed.

There are other very bizarre Chinese lake monsters as well. At Qinghai Lake, north of Qinghai-Tibet Plateau in China, there is a beast that supposedly resembles a “dragon,” with a snake-like head and iridescent scales. At Shennongjia, in western Hubei Province, there is apparently a creature with “grey skin, oblate head, giant eyes and five toes on the forelimb,” that has been seen on and off for years. Then there is Wenbu Lake, which lies in Kunzha County, in China's Tibet Autonomous Region, and which is supposedly inhabited by an ox-like monstrosity with “a small head, big eyes, long neck and grey and black skin.”

From giant fish, to prehistoric monsters, to giant toads, China seems to be a place with its fair share of lake monsters, and it only adds to the general feeling that ours is a planet of aquatic monstrosities lurking beyond our gaze. What are these creatures and how do they manage to survive without being adequately discovered, documented, or indeed even clearly photographed? Is this just misidentification and legends, or is there something more to the lake monster legends found throughout the world? For now we don't know, and the lakes of the world hold their mysteries close.

Looking at the Tricky Nature of the Trickster