New Study Suggests That Mars May Still Be Volcanically Active

Mars may be more active than we had originally thought. A new study suggests that Mars could very well be volcanically active and the proof is in the water. While there isn’t any solid evidence of volcanic activity, such as magma or eruptions, researchers believe that there is still activity on the Red Planet.

Although Mars is still home to ice and vapor, an August 2018 study revealed that there is a 20-kilometer-wide lake which holds liquid water that’s underneath ice located at the south pole of the planet. At first, the authors of the study believed that the water was still in liquid form by dissolved salt, as well as pressure from above it. 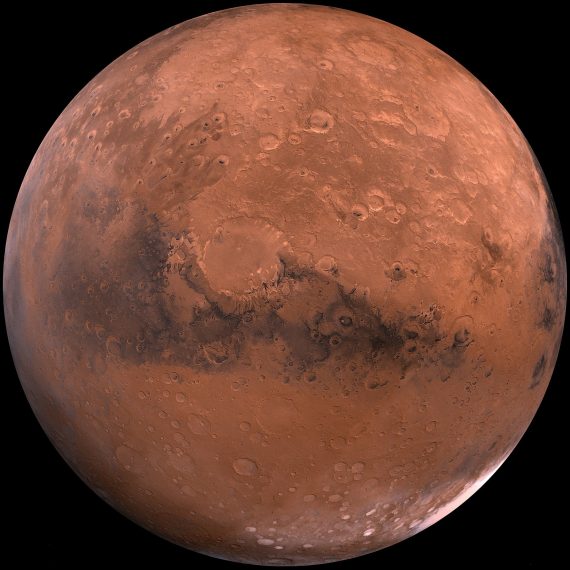 However, new studies conducted seem to suggest that the salt and pressure wouldn’t have been able to keep the water from freezing and that it could only be volcanic activity that keeps it in liquid form. They suggested that the heat would have to come from the interior of the planet and a magma chamber was the most obvious source.

Ali Bramson, who is a postdoctoral research associate at the Lunar and Planetary Laboratory at the University of Arizona, as well as the co-lead author of the new paper, explained, “We think that if there is any life, it likely has to be protected in the subsurface from the radiation.” She went on to say, “If there are still magmatic processes active today, maybe they were more common in the recent past, and could supply more widespread basal melting. This could provide a more favorable environment for liquid water and thus, perhaps, life.”

Mars is home to numerous volcanoes that were active in the past. In fact, the largest volcano in our Solar System is located on the Red Planet and it’s called Olympus Mons. In addition, there are three other shield volcanoes that are located close to Olympus Mons and they are called Tharsis Montes.

The authors of the paper suggest that around 300,000 years ago, magma from the interior of Mars rose to the surface of the planet but instead of creating another volcano, it ended up being trapped in a magma chamber located under the South Pole. Eventually the magma chamber would have cooled down but it still would have released enough heat to have melted the ice that was underneath the polar ice sheet. The end result is that the water would continue to be there because of the heat that’s being released slowly, thus keeping the sub-surface lake in liquid format.

The authors also indicated that if there was volcanic activity on the planet 300,000 years ago, it may still be happening even to this day. Bramson added to that thought by stating, “This would imply that there is still active magma chamber formation going on in the interior of Mars today and it is not just a cold, sort of dead place.”