All of humanity's scientific achievements stem from one thing: math. Mathematics is our gateway to everything from healthcare to space travel, from smashing atoms together to setting up systems of government. It's all just varying degrees of running the numbers. Yet it turns out we might not have a monopoly over the understanding of mathematics. It's already been shown that other mammals and birds are capable of solving basic math problems, but new research has shown that honeybees, despite their incredibly small brains, are capable of solving math puzzles.

According to a paper published in the journal Scientific Advances, a team of French and Australian scientists at RMIT University in Australia were successful in teaching a colony of honeybees not only how to add and subtract, but symbolic representations of addition and subtraction. This comes months after a study proved that honeybees can understand the concept of zero, which takes human beings a few years on Earth to fully grasp.

To train these burgeoning mathletes, scientists set up a simple y-shaped maze. Honeybees would enter one gate and be faced with two possible exits, one (the correct exit) had sugar water as a reward, and the other had a repulsive bitter solution. At the entrance was a picture of between one and fifteen shapes in either yellow or blue. The two branching gates also each had a picture of a number of shapes representing one correct answer and one wrong answer. If the original picture was blue then the bees were supposed to add one to the number of shapes to get the right answer and, consequently, that sweet, sweet sugar. If the original picture was yellow, then the bees were supposed to subtract one. 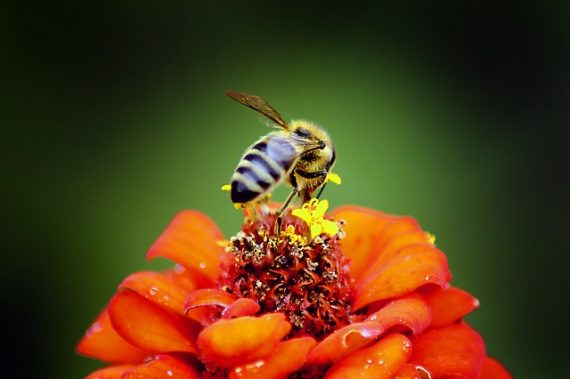 Researchers say that at first the bees completed the maze through nothing but trial and error. But over the course of more than 100 trials, the bees learned the rules and were able to solve math problems they hadn't previously seen. Now the addition and subtraction of one might not seem that impressive but researcher Adrian Dryer says that these math problems are deceptively complex:

"You need to be able to hold the rules around adding and subtracting in your long-term memory, while mentally manipulating a set of given numbers in your short-term memory.

On top of this, our bees also used their short-term memories to solve arithmetic problems, as they learned to recognize plus or minus as abstract concepts rather than being given visual aids."

According to Dryer this study shows that understanding of mathematics may be more common in the animal kingdom than previously thought, and could help humans in the development of artificial intelligence:

"Our findings suggest that advanced numerical cognition may be found much more widely in nature among non-human animals than previously suspected.

If maths doesn’t require a massive brain, there might also be new ways for us to incorporate interactions of both long-term rules and working memory into designs to improve rapid AI learning of new problems.”

Of course they had to bring AI into this. It's getting a little gratuitous and, frankly, I'm sick of it. Let the bees have their moment of glory.

Another very interesting aspect of this study is the size of bees' brains. Lately we've found that the size of the brain doesn't matter nearly as much as we thought when it comes to intelligence. Maybe, in an ironic twist, the bees take their newfound knowledge of the universal language and beat us to artificial intelligence. They'd probably enslave us into an eternity of gardening and we'd deserve it.