Secret Rocket Launches and A Mysterious Vapor Trail in England

With the eyes of the world's superpowers turned towards space in search of new war-fighting domains, more and more aerospace mysteries keep stacking up. Further evidence of clandestine rocket launches was found in England this week as a witness managed to catch a picture of a mysterious “spiral-shaped cloud” which looks an awful lot like a rocket’s vapor trail, implying that someone in the UK may be putting spacecraft into space on the sly. David Hargrave from Sidbury Hill on Salisbury Plain says he was walking his dog around 5:00 pm local time last Tuesday, February 5 when he spotted the strange cloud and, luckily for us, had the presence of mind to snap a compelling picture of the event.

Despite witnessing the event first-hand, Hargrave says he has no idea what the picture may show:

I haven’t got a clue what it is either – hopefully someone out there will have an answer. I saw it when walking the dogs, looking up and seeing the smoke-like air go up vertically. As it got dark we were then no longer able to see it. It is a mystery.

The cloud in the photograph glows red in the setting sun appears to rise out of the ground in what Hargrave says is the direction of Westbury along the northwestern edge of the Salisbury Plain. Nearly half of the plain is taken up by Defence Training Estate Salisbury Plain (DTE SP), a military training area which includes the Boscombe Down experimental airbase and the Defence Science and Technology Laboratory at Porton Down, one of the United Kingdom’s most secretive military research facilities. 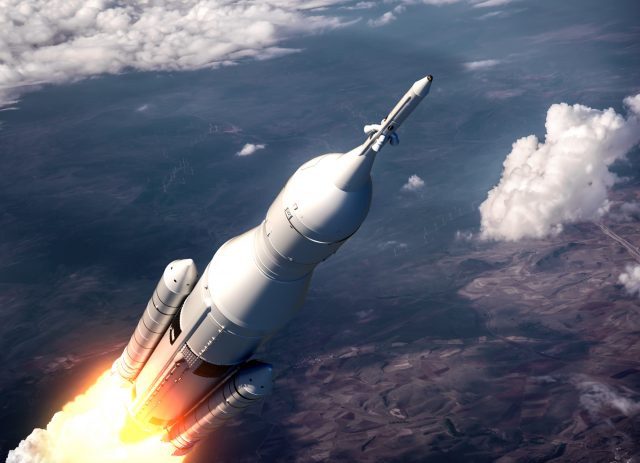 If secret rockets were being launched in the UK, chances are high they could be launched from one of these facilities. However, The London Economic reports that neither the nearby University of Bristol nor the Ministry of Defence claim to know anything about the mysterious vapor trail. Publicly, that is.

Still, the vapor trail in these photos quite strongly resembles other images of known rocket launches and while the official silence surrounding the mysterious cloud is unusual, it’s not unprecedented. Evidence of seemingly secret “black” launches is being caught on camera around the world with increasing frequency even as government officials deny knowledge of the obvious.

What’s going on in space that’s requires so much secrecy? Do we really want to know? Furthermore, who owns the air above us? Should governments or private aerospace corporations be allowed to launch whatever they want into the air above our heads without the public's consent?