These are the voyages of the starship Enterprise. Its five-year mission: to explore strange new worlds. To seek out new life and new civilizations. To boldly go where no man has gone before!

If only we knew what was the true mission of the "USS Enterprise" spotted above California this week. One of the most mysterious aircraft in the world, a U-2 Dragon Lady, was seen flying above California last week broadcasting the call sign NCC-1701A - the same registry as the legendary USS Enterprise from the Star Trek franchise. The U-2 spy plane took off from Beale Air Force Base in Northern California on January 30th then flew a trapezoidal pattern above Northern California for four hours, crossing into Nevada at one point before circling back. Beale Air Force Base is home to the USAF’s 9th Reconnaissance Wing which conducts high-altitude surveillance and intelligence missions in support of combat forces.

What was the plane doing up there, and why was it broadcasting such an iconic, conspicuous call sign? In all likelihood it was merely a test flight or basic exercise and the call sign was someone’s way of making their work day slightly more interesting. However, it could very well be that the plane was conducting reconnaissance ahead of a mysterious and slightly unnerving special operations exercise which took place in California this week.

The U.S. Armed Forces are currently conducting urban operations drills in Los Angeles and Long Beach known as Emerald Warrior/Emerald Trident. The operations have seen military helicopters conducting mock raids in densely populated urban environments and all manners of spy planes circling overhead conducting electronic and visual surveillance of the ground below. Videos posted to social media show MH-6 Little Bird helicopters landing on L.A. rooftops to pick up and drop off special operators. Curiously, the public and LAPD were not notified of the operation until moments before the first helicopters started landing. 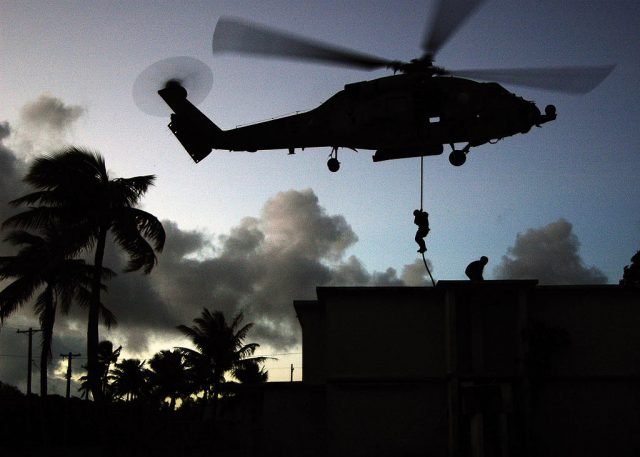 As aviation watchdog blogs have noted, those exercises have seen some of the American military’s most advanced and secretive spy planes fly curious circular routes above California. Again, it’s highly likely these are all just part of the Emerald Warrior/Emerald Trident drills, but I’m left to wonder why the military would risk conducting drills in such densely populated areas where the risk of harming civilians is so high. Is there something to these secretive operations the military isn’t telling us? Probably not, although how can we know for sure?