Stonehenge and Other Megaliths May Originate from France

So many questions, and unfortunately, despite the many studies conducted on the stones, we’re not too closer to answering any of them than we were decades ago. However, a new study published this week may help place Stonehenge in context with other known ancient structures and may offer a clue as to what inspired the mysterious stone monument. The latest new theory to be put forward about Stonehenge and other ancient megaliths claims that an unknown ancient culture from northwest France may have started building these structures over 7,000 years ago and inspired the entire practice of building these stones throughout Europe.

The new “Out-of-France” theory was developed by Bettina Schulz Paulsson of the University of Gothenburg in Sweden after a 10-year study of monument sites throughout Europe. Paulsson and her colleagues conducted exhaustive radiocarbon dating of over 2,000 of these structures and found that they appeared to have been built in three successive phases, the first of which seems to have originated in France. 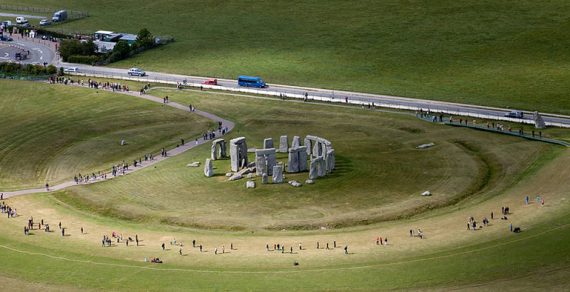 According to Paulsson's new publication in the Proceedings of the National Academy of Sciences of the United States of America, the practice of building stone megalithic monuments likely spread along sea routes throughout the Mediterranean and Atlantic coast of Europe. Paulsson argues that the gateway-like construction of these monuments along with their chronological distribution seems to imply that these structures were involved in passage grave burial rites:

Their distribution emphasizes the maritime linkage of these societies and a diffusion of the passage grave tradition along the seaway. The passage graves mark a radical change of burial rites, along with other economic and social changes in Europe. [...] These are exceptional grave forms for this period in their respective regions, at a time when subterranean cists, pit burials and hypogea (dug-out subterranean burial chambers) were still the most common burial rites.

If this theory is confirmed with further research, Paulsson notes that it could radically change our conception of Stonehenge and other megaliths:

The megalithic movements must have been powerful to spread with such rapidity at the different phases, and the maritime skills, knowledge, and technology of these societies must have been much more developed than hitherto presumed.

Were Stonehenge and other monuments used as elaborate grave sites which reflected the maritime heritage of their creators? How did the knowledge of megalith construction spread so rapidly throughout Europe? Like all things Stonehenge, we’ll likely never know for sure. Hard data like radiocarbon dates are one thing, but trying to understand the meaning of ancient monuments from our modern perspective will always be problematic. How can we possibly hope to understand what ancient people were thinking from studying a pile of rocks? Ultimately, any theories about Stonehenge will reflect our thinking about the monument, not necessarily its creators'.

Politicians in Thailand are Switching From Consultants to Clairvoyants