One of the dubious quests of breeders has been to create small versions of larger animals. Thus we have toy poodles, miniature pigs and cats that look somewhat like tigers. While cute, these critters often have more problems than their bigger counterparts and, at least in the case of mini and teacup pigs, often reach maxi-size anyway. That’s why nature and evolution generally start small and move the best traits to ever-growing descendants. As proof, paleologists announced last week the discovery of a mini-me ancestor of the Tyrannosaurus Rex that would have been shorter than a human – if any existed at the time. And if they did, they probably would have considered keeping one of these cute creatures as a pet … at least until it ate a few neighbors.

"When and how quickly tyrannosaurs went from wallflower to prom king has been vexing paleontologists for a long time. The only way to attack this problem was to get out there and find more data on these rare animals."

Most people never think of the Thunder Lizard as a wallflower, yet Lindsay Zanno, the head of paleontology at the North Carolina Museum of Sciences, says there’s a 70 million-year gap in its history where an explanation of how it evolved from a weak fog lizard living in fear of Allosaurs into the BMOC (big monster of Cretaceous) should be. The best place to find T. rex fossils in North America is in Utah, and Zanno has spent a decade there recovering them, including an unusual collection of teeth and a hind limb from what appeared to be a juvenile T. rex. As she explains in a press release for her new study published in Communications Biology, appearances can be deceiving.

“It’s certainly not a very young individual of a very large species.”

Growth rings showed that these came from a mature, seven-year-old creature weighing about 170 pounds, four feet in height and measuring 6 feet from nose to tail. Determining it was a new species, Zanno got the honor of naming it Moros intrepidus after Greek mythology being of impending doom who drives mortals to their death. (Photos of the fossils and drawings of Moros can be seen here.) An appropriate name for a cute T. rex mini-me?

"Moros was lightweight and exceptionally fast. These adaptations, together with advanced sensory capabilities, are the mark of a formidable predator. It could easily have run down prey, while avoiding confrontation with the top predators of the day.”

In other words, Moros was a Teeny Rex and worthy ancestor and role model to its monstrous descendants – ready to dominate the environment when its main rival, the Allosaurs, mysteriously disappeared. While there’s still no explanation for that, the analysis of the North American Moros fossils also identified where it came from. Before you start your U-S-A! U-S-A! chant, that’s the wrong answer but thanks for playing – you can pick up your parting gifts on the way out as you hold the door open for …

“T. rex and its famous contemporaries such as Triceratops may be among our most beloved cultural icons, but we owe their existence to their intrepid ancestors who migrated here from Asia at least 30 million years prior. Moros signals the establishment of the iconic Late Cretaceous ecosystems of North America.” 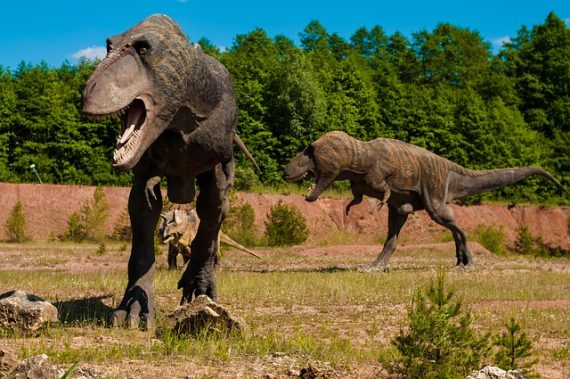 Perhaps Moros intrepidus is a good role model for our modern times as well. Zanno points out in an interview with The Atlantic the true secret to its and its descendants’ success:

“Tyrannosaurs are such iconic predators that people think they somehow outcompeted their rivals and were destined to be the top predators of the day. But Moros helps us understand that their success was linked to the extinction of allosaurs. Had that not happened, these tiny animals wouldn’t have been able to assume the top predator roles. There was no destiny in the ascent of tyrannosaurs.”

The Terrifying Case of the Demon of Brownsville Road