The Weird Tale of the Paradogs of World War II

Throughout the history of warfare humans have sought to find a use for animals on the battlefield. This has gone back through time and been a topic of much ethical discussion, yet it is not solely confined to the mists of history. In more modern times there are numerous accounts of animals being used for war efforts, of which I have written of here before, with them even being used against terrorists, and one very curious and inspirational tale of wartime animals is the parachuting dogs of World War II.

It was the days leading up to the historic Normandy D Day invasion, a forbidding and sinister prospect that had the Allied forces scrambling for any advantage they could possibly have. One of the crazier ideas that came up amid all of the panicked desperation was to utilize specially trained dogs for actually parachuting down into the war zone to conduct a variety of missions, such as serving as the eyes and ears for those on the ground, sniffing out enemy positions, locating mines, keeping watch, warning about enemies, and keeping up morale. It was a rather silly and absurd idea at the time, probably breathlessly  thrown out in pure desperation, but surprisingly the British military actually pursued it, with the the 13th (Lancashire) Parachute Battalion taking the surreal idea and absolutely running with it.

In order to recruit the dogs that would be needed, the military released an appeal to the public asking that they donate any unwanted pets they might have, and in the face of the widespread food rations at the time more than enough people were happy to comply. The military received a deluge of dog donations, to the point that it served as more of a shelter for those wanting to get rid of their unwanted pets rather than a recruitment, which were then vetted and chosen for their suitability for wartime combat operations. The “War Dog Training School” was then established in Hertfordshire in 1941 and training began in earnest. 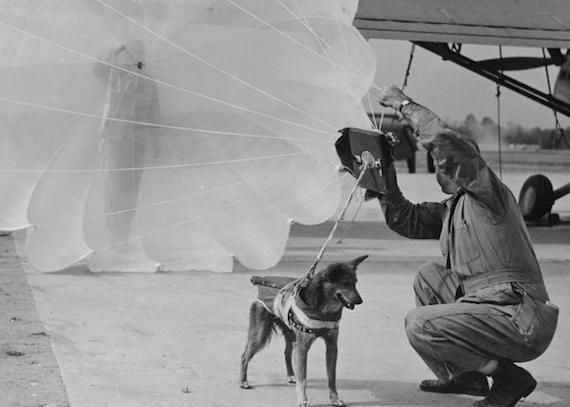 The dogs were methodically trained to do things such as identify minefields, detect the smell of gunpowder or explosives, locate booby traps, follow the troops, and most importantly to ignore loud noises. This was seen of the utmost importance, because a bunch of freaked out dogs in the war zone running off in all directions were useless. To this end, the dogs were acclimated to the noise through a months-long regiment that included them being sat within a nosy transport aircraft for hours on end. They were also trained to get used to the sound of gunfire, as well as the scents of the battlefield.

After that they were put through actual parachute training, strapped to parachutes and dropped from planes, something they seemed to be rather adept at, their slim bodies dealing well with the drag of the parachutes, which had been designed for bicycles. After being denied food or water for a time they would drop out with a handler carrying a piece of meat with them to keep the dogs alert and under control. One trainer named Lance Corporal Ken Bailey has written much on the program in his notebooks, and chronicles some of the standout dogs of the training operation. He writes of one such jump with a female Alsatian named Ranee, of which he says:

After my chute developed, I turned to face the line of flight; the dog was 30 yards away and slightly above. The chute had opened and was oscillating slightly. (Ranee) looked somewhat bewildered but showed no sign of fear. I called out and she immediately turned in my direction and wagged her tail vigorously. The dog touched down 80 feet before I landed. She was completely relaxed, making no attempt to anticipate or resist the landing, rolled over once, scrambled to her feet and stood looking round. I landed 40 feet from her and immediately ran to her, released her and gave her the feed.

This training method seemed to work for many of the dogs involved, but the real test of their meddle and courage was just around the corner with the actual arrival of D-day. The training was apparently successful, and the dogs lined up ready to face the looming threat on the horizon, and when the action finally came there were to be some rather inspirational stories to be gleaned from their forays into the battle zone. On June 5, 1944, the battalion planes droned on through the skies towards an uncertain future and an enemy that would love nothing more than to see them all dead. It was an uncertain time that would later turn out to be one of the bloodiest engagements of the entire war, but here and now, in these planes, the dogs were calm and doing exactly as their training had taught them. On this day each plane had been loaded with 20 paratroopers and one “paradog,” as the animals had come to be known, and when they were finally dropped amidst exploding artillery in the air the results would be mixed. 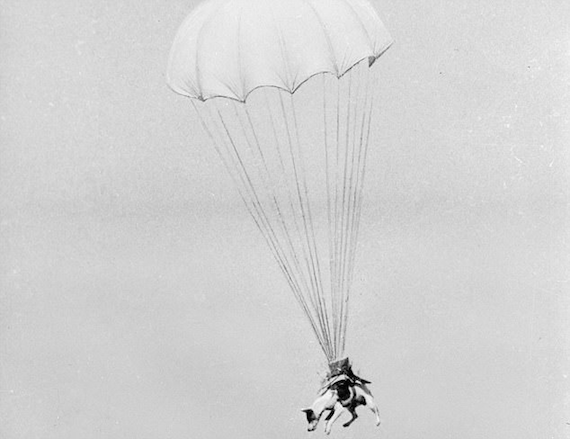 One of the success stories of the final operation was a German Shepherd-collie mix by the name of Bing, also called Brian. The dog had been donated to the war effort by a woman named Betty Fetch, and he had been trained as best as they could. As the plane bore down over enemy territory and the ruckus began, Bing got scared and moved to hide at the back of the plane but was forced into action by his handler, who physically tossed the cowering dog out of the plane. The dog would float down to have his parachute become entangled within a tree, after which he was actually injured by incoming German artillery fire, but he eventually got down to the ground, where he displayed exceptional skill in pointing out enemy mines and saving Allied lives. He would go on to be dropped once again into enemy territory to check out a house that was thought to harbor enemy troops, properly alerting his handlers to the threat.

Bing would later be awarded the Dickin Medal, which is the highest award a military animal can achieve, and after the war reunited with his previous owner. Upon his death in 1955 he would be buried within a special cemetery near London, and a life-sized sculpture of him was erected within the Parachute Regiment and Airborne Forces Museum in Duxford. Two other paradogs on the mission named Monty and the aforementioned Renee were not so lucky, and although they proved their usefulness they would not return to accept the accolades that Bing had, more casualties in a war permeated by many. The adventures of Bing, the paradog, have been chronicled in the 21012 book The Amazing Adventures of Bing the Parachuting Dog, and there is further information on World War II’s paradogs in a book by Andrew Woolhouse entitled 13 - Lucky for Some: The History of the 13th (Lancashire) Parachute Battalion.

It is interesting to note how tied to us dogs have become. Some may complain that these animals were forced into service against their will and mistreated, but one wonders if they would have had it any other way, always brave, vigilant, and willing to stand by their human masters no matter what that may entail. Much has been written of stories of the valor of human soldiers, but what of our canine companions? Here, with the paradogs of World War II we can see that they were every bit as capable of standing up for their country as anyone else, and whether you agree with their use in war or not they showed meddle that would make any human being proud.

‘Vampire Killer’ Caught Posing as a Doctor in Russia