CBS All Access has confirmed that their upcoming reboot of The Twilight Zone will premiere on the streaming service on April 1 with two episodes airing back-to-back. They’ve also dropped an enticing trailer, in which we catch a glimpse of Jordan Peele in the shoes of the legendary Rod Serling, who created and hosted the original classic series. The subsequent episodes will premiere on Thursdays from April 11. Check out the trailer here.

The original Twilight Zone aired on CBS from 1959-1964 and made an instant and indelible impression on viewers, not only for its outstanding quality as television product, but also for its bold and progressive commentary on some of the defining socio-political issues of the day.  The show was cancelled in 1964, but its legacy was already alive as the similar The Outer Limits was, by now, enjoying its own success. Over the decades to follow, many more shows inspired by The Twilight Zone would enjoy tremendous popularity, not least of all The X-Files, for which Chris Carter has repeatedly stated he is heavily indebted to Rod Serling. 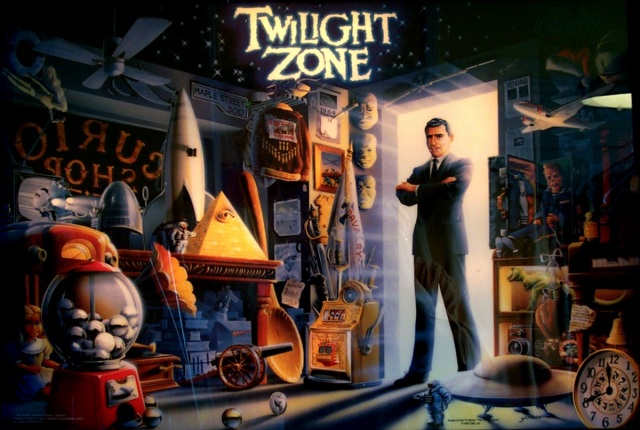 In 1983 Steven Spielberg (himself heavily influenced by the show) produced a big-budget Twilight Zone movie, which he co-directed with John Landis, Joe Dante, and George Miller. However, a tragic helicopter accident during the shoot resulted in the deaths of three people (an adult and two children) and created a storm of bad publicity for the movie. It opened to mixed reviews; its box-office returns were underwhelming too, but still strong enough to lead to a revival of the Twilight Zone TV show in the 1980s, which ran for three seasons and employed such talents as William Friedkin, Atom Egoyan, and Wes Craven. The show was revived yet again on UPN in 2002 for a single season hosted by Forest Whitaker.

The original Rod Serling show was produced in the heyday of UFOs and ufology, and so it’s no surprise that that it tackled the subject of alien visitation. A memorable episode from 1962, To Serve Man, saw a race of seemingly benevolent nine-foot-tall aliens land on Earth and solve humanity’s most pressing problems, including hunger, energy, and the threat of nuclear war. Before long, Earthlings are volunteering to visit their alien saviours’ home planet, unaware that they are offering themselves up as ingredients in an alien cookbook, titled... “To Serve Man.”

Serling’s show also anticipated popular fascination with the idea of Ancient Astronauts. Before Erich von Däniken became a household name, ideas of pre-visitation and alien-based religion were being explored in The Twilight Zone. In an episode titled “Probe 7, Over and Out,” which aired 29 November 1963, an astronaut, Colonel Cook, crash lands on an alien planet similar to his own in atmospheric and gravitational conditions. Soon after his crash, Cook learns that his own world has succumbed to nuclear Armageddon. Return is not an option.

While exploring his new surroundings, Cook meets a woman from another species who has crash-landed on the same planet while fleeing her own dying world. Her name is Norda. Together, Cook and Norda head with hope toward a “garden” area rich in fruits and vegetation, but not before fully introducing themselves to one another. Cook reveals his first name to be “Adam,” while Norda gives her last name as “Eve.” They name their new world after Eve’s word for soil: “Irth,” pronounced by Adam as “Earth.” The episode ends soon after Eve offers Adam a “seppla” – an apple she picks from a tree. As ever, Rod Serling provides the closing narration:

Of course, our world has changed a great deal since Rod Serling’s original Twilight Zone, and it will be interesting to see not only how the social commentary of the show has evolved, but also the extent to which it will incorporate the much-expanded mythologies surrounding popular anomalistics, especially UFOs, cryptozoology and the paranormal.

We won’t have to wait too long to find out.

Peer Review for Robots: Can Machine Learning Be Trusted to Make New Discoveries?