UFOs and Odd “Vibraniums”: A Look at the CIA’s Weird Tweeting Habit

On Sunday night, as Americans were settling in for the beginning of the week ahead, many televisions were dialed-in to the 91st Academy Awards, held this year at the Dolby Theatre in Hollywood, Los Angeles, California.

Notably, this year's Oscars ceremony was the first since 1989 to be held in the absence of a host, after repeated failed attempts to secure prospectives that included Dwayne "The Rock" Johnson, as well as comedian Kevin Hart (who stepped aside after a series of Tweets rose from his past and stirred controversy; it's a social media trap that has become all-too-familiar to us these days).

However, these weren't the only notable and controversial things happening with relation to this year's Oscars on Twitter. As the awards were being given, many people following the proceedings on social media were surprised to see the U.S. Central Intelligence Agency chiming in.

"In #BlackPanther," the CIA's Tweet read, "a unique metal called #vibranium helped the fictional African nation of #Wakanda become the most technologically advanced country on the planet." It was accompanied by a poll asking whether viewers thought  "vibranium" was "A real metal," "Based upon real materials," "Possible future tech," or simply "Total fiction", with the latter option winning at

The Tweet was linked to a page about the CIA's "Reel vs. Real," described at its website as follows:

Merging the overt world of Hollywood with the covert mission of the CIA, the Agency's "Reel vs. Real" event seeks to demystify the CIA's mission by comparing what's seen on TV to what happens in reality. Former CIA officers join the acclaimed creator and actors from FX's "The Americans" on-stage at UCLA for a lively discussion about the facts vs. fiction of espionage, CIA tradecraft, and living under cover.

Although Hollywood and entertainment reporting isn't something we focus on all that often here at MU, the occasional humor that appears on the CIA's Twitter feed isn't lost on us. Back in January 2018, Paul Seaburn also reported here on one of the agency's occasional UFO-related Tweets, which featured a famous UFO photograph in conjunction with a post commemorating World UFO Day.

This wasn't the first time the CIA used its Twitter account to make references to UFOs. Back in early 2015, as the agency Tweeted about its most-read articles from the previous year, it featured what was likely the first of its Tweets about the subject when it shared the following: 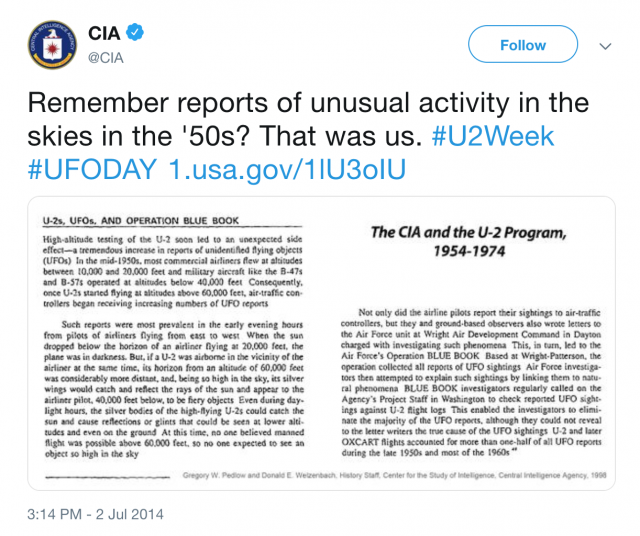 The Tweet linked to an article titled "The CIA and the U-2 Program, 1954-1974," featured as a PDF document which discussed the agency's high-altitude tests involving the U-2 spyplane in the 1950s.

"[T]esting of the U-2 soon led to an unexpected side effect — a tremendous increase in reports of unidentified flying objects (UFOs)," the report states. Two years earlier, the agency had already released historical documents pertaining to the U-2 Program, which gave the position of the famous Area 51 base near Groom Lake Nevada. There was no Tweet that accompanied this release, however, since the CIA's Twitter account did not appear online until the following year.

In fact, the CIA's penchant for the provocative and humorous in its Tweeting habits goes all the way back to its very first Tweet, issued on June 26, 2014, which simply stated, "We can neither confirm nor deny that this is our first tweet."

Obviously, whoever handles the CIA's Twitter account enjoys poking a little fun at the tropes associated with their work, and even putting their own spin on a few common internet memes. The agency may have even resorted to posting cat pictures on at least one occasion; but as you might have guessed, we're not in a position to confirm, nor deny whether such an incident ever occurred... you be the judge.