UFOs: Looking Beyond the Extraterrestrial Theory

Over the course of the last 70 years or so, the world of Ufology has spawned a truly huge number of books. Many are very good indeed, a not-insignificant number are very bad, and some hover somewhere in between. Just occasionally, however, a title comes along that is truly revolutionary, ground-breaking and - as far as its potential implications are concerned - thought-provoking in the extreme. For me, personally, Jacque Vallee's Messengers of Deception and John Keel's UFOs: Operation Trojan Horse both fall into that latter category. Both books argue - albeit in different ways - that we should look beyond the extraterrestrial hypothesis for answers. Of course, for many of the longstanding players within Ufology, any talk of deceptive messengers, or of Keel's super-spectrum, is dismissed as mere speculation and not much else. For them, UFOs have to be extraterrestrial. After all, they have upheld such notions and beliefs for decades; and to relegate them to the rubbish-bin is not an option.

Well, I have a few choice words for those people who are so rigidly set in their ways: the extraterrestrial hypothesis is itself entirely speculative and totally lacking in hard evidence. All we really know for certain is that there most assuredly is a genuine UFO phenomenon. But, as for definitive proof of its actual point of origin or origins? Please! There is none. At all. There is merely a lot of data clearly demonstrating the presence of unidentified "others" among us.

Vallee and Keel most assuredly and astutely recognized this (Vallee still does). They understood that a puzzle which - at first glance - seemed to be defined by the presence of nuts-and-bolts spacecraft and flesh-and-blood aliens in our midst, was far, far stranger than many within Ufology wanted to admit. And there was someone else who also recognized this ufological factor: Mac Tonnies. Mac was someone who I met once, corresponded with on seven or eight occasions, and chatted with now and again. We were becoming good friends when Mac's life came to an end. Like all of his friends I was shocked when Mac passed away suddenly and tragically in 2009, at the age of only 34. But, I was pleased that Mac's third and final book, The Cryptoterrestrials, got published - all thanks to Anomalist Books. 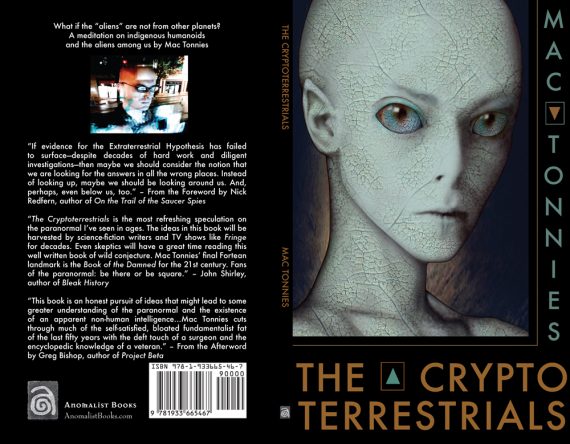 Like Vallee and Keel, Mac rightly recognized that not all UFO encounters could dismissed as the ravings of lunatics, the tales of the fantasy-prone, or the lies of those seeking fame and fortune. But, he was also careful not to get sucked into the near-viral mindset that practically screams (take a deep breath): UFOs = alien spaceships piloted by little gray chaps from across the galaxy, who are on a mission to save their dying race by stealing our DNA, eggs and sperm. Rather, Mac - right up until the time of his death - was chasing down the theory suggesting that the UFOnauts may actually represent the last vestiges of a very ancient race of distinctly terrestrial origins; a race that - tens of thousands of years ago - may have ruled our planet, but whose position of power was thrown into overwhelming chaos by two things: (A) the appearance of a "debilitating genetic syndrome" that ravaged their society; and (B) the rising infestation of a violent species that threatened to eclipse - in number - their own society. They are, said Mac, the Cryptoterrestrials. And that violent species that blusters around like an insane, unruly and spoiled child, and that has done more damage in its short life-time than can ever be truly imagined, is, of course, us.

With their society waning, Mac suggested, their health and ability to even successfully reproduce began to collapse. As a result, their absolute worst nightmare came true: the Human Race became the new gang in town. The Cryptoterrestrials followed what was perceived as the only viable option: they quietly retreated into the shadows, into the darkened corners of our world, below the oceans, into the deeper caverns that pepper the planet. And, in their own uniquely silent and detached way, set about a new course of action. That course of action - given that they were in some fashion genetically related to the Human Race - was to eventually resurface; to move among us in stealth; to pass themselves off as entities from far-off worlds (as part of a concerted effort to protect and hide their real point of origin); and to use and exploit us - medically - in an attempt to try and inject their waning species with a considerable amount of new blood: ours.

In addition, Mac believed, the Cryptoterrestrials were - and, by definition, still are - subtle-yet-brilliant, cosmic magicians. For them, however, there is no top-hat from which a white-rabbit is pulled. There is no hot babe sliced in half and then miraculously rejoined at the waist. No: their tricks are far more fantastic. As well as deceiving us about their origins, the Cryptoterrestrials have - via, perhaps, the use of advanced hologram-style technology, mind-manipulation and much more - led us to conclude that they have an infinite number of craft, resources and technologies at their disposal. And that, Mac added, is the trick, the ruse: in actuality, their numbers today may be very small. They may well be staging faked UFO events to try and convince us that they have a veritable armada at their disposal when, perhaps, the exact opposite is the case. And, most important of all, they desperately want us to think of them as visitors from the stars. If their plan to rejuvenate their species is to work, then stealth, subterfuge and camouflage are the essential orders of the day. Of course, the above all amounts to a theory - just like the ETH. And, Mac's book makes it very clear that he was only theorizing, rather than being able to provide the reader with definitive proof for such an extremely controversial scenario. He did, however, offer a logical, and at times powerful, argument in support of the theme of his book.

"Alien abductions" and the clumsy, intrusive means by which ova and sperm are taken by a race of beings we are led to believe are countless years ahead of us, were also addressed by Mac. That the ability of the aliens to wipe out the memories of those they abduct is constantly and regularly overturned by nothing more than simple hypnosis was highlighted. And the unlikely scenario that our DNA would even be compatible, in the first place, with extraterrestrial entities was also firmly dissected. Mac's conclusion: all this points not to the presence of highly-advanced aliens who are thousands of years ahead of us, but to the actions of an ancient Earth-based society whose technology may not be more than a century or so in advance of our current knowledge. Mac also noted how the "aliens" seem to spend a hell of a lot time ensuring they are seen: whether its taking "soil-samples" at the side of the road; equipping their craft with bright, flashing lights; or hammering home the point to the abductees that they are from this planet, from that star-system, or from some far off galaxy. Just about anywhere aside from right here, in fact. 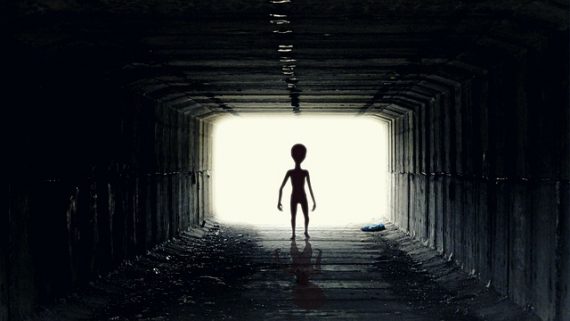 For Mac, Roswell came into the equation, too: and in ingenious fashion. Those who do not adhere to the extraterrestrial hypothesis for Roswell point to the fact that many of the witness descriptions of what was found at Roswell, are collectively suggestive of some form of large balloon-type structure having come down at the Foster Ranch, Lincoln County, New Mexico on that fateful day in the summer of 1947. The possibility that ET would be flying around New Mexico in a balloon is absurd. But, as Mac noted, a race of impoverished, underground-dwellers, highly worried by the sudden influx of military activity in New Mexico (White Sands, Los Alamos etc), just might employ the use of an advance balloon-type vehicle to secretly scope out the area late at night. Perhaps, when elements of the U.S. military came across the debris, they really did assume it was balloon-borne material and probably of American origin. Until, maybe, they stumbled across something else amid the debris, too. Unusual bodies, maybe...

The Cryptoterrestrials continued in a similar vein, to the extent that we are left with a stark and surreal image of a very ancient - and very strange - race of beings who may once have been the masters of this planet; who were sidelined thousands of years ago; and who are now - under cover of darkness and while the cities sleep - forced to grudgingly surface from their darkened lairs and interact with the very things they fear (and perhaps even hate and despise) most of all: us. Survival, Mac said, is the name of their game. And deception is the means by which it is being cunningly achieved. Whether you agree with Mac's theorizing or not, The Cryptoterrestrials is a book that is expertly and beautifully written. It challenges the reader to throw out old, rigid views. It represents the careful studies of a man who knew he was going out on a limb - but who, thankfully, didn't give a damn about appeasing the UFO research community in fawning style. And, for me, it truly is a Messengers of Deception for the 21st Century and for Generation-Next.