2,500-Year-Old Mysterious Ancient Ship of Herodotus Has Been Found

Herodotus, the man referred to by the Roman orator Cicero as "The Father of History"(and who are we to argue with Cicero?), wrote in 440 BCE what is considered to be the founding work of history in Western literature -- The Histories. In that book, Herodotus mentions a strange and mysterious river boat he saw in Egypt called a “baris” – strange because the extremely long boat had one rudder that passed through a hole in the keel, and mysterious because no one else in recorded history has ever seen one since … until now. Underwater archeologists excavating the sunken city of Thonis-Heracleion in Abu Qir Bay near Alexandria have discovered the wreck of a long boat that meets the description by Herodotus, restoring faith in the writings of the historian and the endorsement by Cicero.

“(The builders) cut planks two cubits long [100 cm or 40 inches] and arrange them like bricks. On the strong and long tenons [pieces of wood] they insert two-cubit planks. When they have built their ship in this way, they stretch beams over them… They obturate the seams from within with papyrus. There is one rudder, passing through a hole in the keel. The mast is of acacia and the sails of papyrus...”

With that excellent account of the building of one of these 92 foot (28 meters) barges, archaeologists have long known what to look for … they just never found an Egyptian baris, whole or wrecked. Their luck changed in 2000 with the discovery by French archaeologist Franck Goddio of the sunken city of Thonis-Heracleion (the former is its Egyptian name, the latter Roman) in the bay of the Canopic Mouth of the Nile, 2.5 miles off the coast. Since then, over 70 ships have been found in the area and given numbers. Archeologists noticed that Ship 17, with over 70 % of its original hull intact, had an unusual arrangement of planks that no one had ever seen before.

"Herodotus describes the boats as having long internal ribs. Nobody really knew what that meant. … That structure's never been seen archaeologically before. Then, we discovered this form of construction on this particular boat and it absolutely is what Herodotus has been saying." 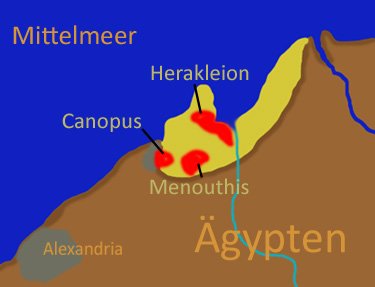 Damian Robinson, the director of Oxford University's Centre for Maritime Archaeology, said this in an interview with The Guardian about the recent release of a paper by Alexander Belov, an archaeologist and shipwreck specialist who worked with Franck Goddio, entitled “Ship 17: A Baris From Thonis-Heracleion.” Robinson believes the baris was used on the Nile to move imports from Greece and Persia and Egyptian exports of grain and salt.

Even though his writings have generally been proven to be historically accurate, Herodotus has often been criticized as being just an entertaining but not always factual historian. This discovery helps his reputation and also gives a little vindication to his promoter Cicero, who was killed, beheaded, mutilated and disparaged for his opposition to Mark Antony.