Are you familiar with El Familiar? Me neither, which is why this recent story out of Argentina was so intriguing. A worker at a sugar operation in the Orán department of the province of Salta frightened security officers at the mill when he burst in hysterically babbling about his encounter with a shadowy giant man-like creature in a hat who chased him for 10 miles. When the news leaked to the local media, locals immediately blamed El Familiar. Let’s get familiar with this mythical (or maybe not) demon of Argentina.

The most popular version of the legend begins in the sugar cane industry, whose farming and milling has long played a large part in Argentina’s economy … so much so that during a period of severe bad crops, the government allegedly became desperate enough to accept an offer from the Devil himself. The sugar industry in centered in the northern provinces of Salta, Tucumán and Jujuy, so any downturn would affect many people. To counteract the economic problems, the rich owners of the operations allegedly banded together and formed a pact with the Devil. In return for protecting their fields and factories, they would provide an annual human sacrifice selected by the owners and then dragged to Hell by a headless black dog with a chain around its neck. Despite the one-per-year deal, many believed the dog roamed the plantations all year long in search of more victims. Other forms of the legend depict El Familiar as a giant snake named Vivoron or as the Devil himself. Whatever form it takes, because of the deal, the creature is a member of the sugar cane “family” or El Familiar. 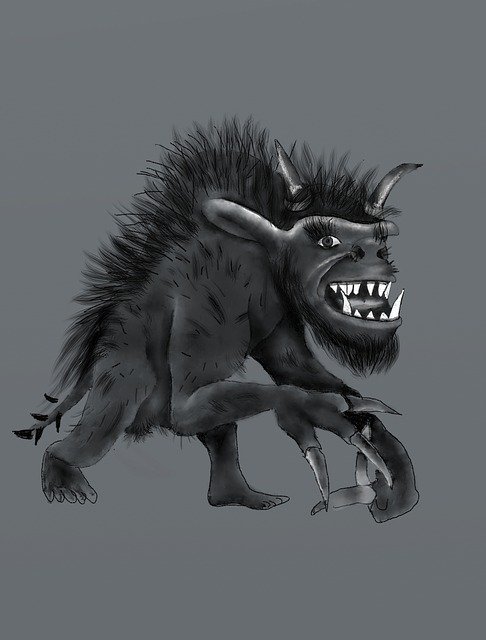 To avoid being taken by El Familiar, one should first not take a job in the Argentine sugar industry. If it’s too late for that, the folkloric suggestions are to go into the fields or the factories wearing a cross and carrying a rosary and a knife or machete. Tales of those who survive say they come out of the fields with their clothes torn and their bodies scratched, thus supporting the dog myth (fortunately, a headless dog can’t bite). It’s said that anyone who survives an attack is paid large sums of money to keep quiet.

Needless to say, in areas where belief in El Familiar is strong, it is blamed for disappearances on the vast sugar plantations or death due to accidents in the factories, where workers can be caught up in machines or fall into vats. It’s often said that more sacrifices mean better profits, so not everyone is upset. Argentines not in the sugar business aren’t necessarily safe from El Familiar … he is a favorite bogeyman for scaring children and gullible adults.

So, what did the 23-year-oldworker at a sugar mill in the Orán department see that caused him to allegedly run 16 km (10 miles)? The security officer who dealt with him gave this report, which is a rough Google translation of the local news coverage in Informate Salta:

"Suddenly this fellow appeared and he couldn't speak, like when you've lost your voice. So he stammered and said, "ma'am...could you phone my mother." The fright he gave me when I saw him standing before me, like that, right out of nowhere. So I stood up and asked him, "what are you doing here?" and he stared at me. The fellow wanted to cry. I asked him to sit down on a chair, but he refused and sat on the floor instead. I gave him water, put some on his head, and asked him to calm down.

It was then that the young man confessed something had tried to grab him. "I thought at first they wanted to rob him, but when he managed to calm down a bit he told me he was on top of the machine and felt someone throwing pebbles at the window, and larger rocks at the roof. He was got down from the machine, took a flashlight, and he saw the giant shadow of a man with a hat. The shadow shouted: "Yaaa te vas de acá" ("You're getting out of here now!"). The guy grabbed his bag and started running non-stop.

The distance between the stillage vats and the control station, the woman estimated, is similar to the distance separating [the town of] Hipólito Yrigoyen and Orán - some 16 kilometers. "It's too far for a person to run."

He looked behind him as he ran and could see the shadow chasing him, as if to seize him. At one point he fell down and looked for the cellphone in his pocket, but he tore his pants pockets out of fear. When I asked him to pull his hands out, he had the pockets in his hands. His eyes were on the verge of bulging out, his face was pale.”

And then she said it got really scary.

"As I was calming him down, a very heavy iron table (in the shack) was overturned and left with its legs in the air, as if thrown by someone. Security officer Yáñez had arrived by then and saw [the table] like that. That's when we realized that El Familiar had tried to take him and had chased him right to the station. I wasn't frightened because I know the story well, but the fellow started crying and kept repeating he wanted to be with his mother. I didn't know how to behave at that moment. I was afraid (the young man) would have a seizure, because he was so frightened. I finally left when my replacement arrived."

Will this worker see a big payoff after allegedly surviving El Familiar? Will the security officer get punished – or sacrificed – for not keeping quiet about it?

Has anyone checked the Argentine commodities market lately for the price on sugar futures?