First Ever Skull Fragment of Denisovans Has Been Found in Siberia

The mysterious extinct sub-species of hominins known as the Denisovans (Homo denisova) just got a little less mysterious as researchers have identified a piece of a Denisovan skull for the first time ever – adding one more bone to the growing collection that they hope will someday tell us their history, their relations with both Neanderthals and humans, and what they passed down to us.

“It’s very nice that we finally have fragments like this. It’s not a full skull, but it’s a piece of a skull. It gives us more. Compared to the finger and the teeth, it’s nice to have. We’re always greedy. We want more.”

Paleoanthropologist Bence Viola from the University of Toronto explained in an interview with Sapiens that he will be giving more information about the skull at the upcoming meeting of the American Association of Physical Anthropologists to be held in Cleveland, Ohio, on March 27-30, 2019. The piece of skull was discovered in the same Siberian cave in the Altai Mountains as the first Denisovan fossil – a pinky finer fragment – was discovered in 2010 mixed in a pile of human, Neanderthal and animal bones. Three teeth were later found and the skull piece was identified three years ago, so “greedy” paleoanthropologists like Viola expect to find more there.

The Denisovan skull piece is two connecting fragments from the back, left-hand side of the parietal bone and measure about 8 cm by 5 cm (3.1 inches by 2 inches). DNA testing identified it as belonging to a Denisovan, making it the fifth member of the subspecies found in the cave. However, there’s not enough genetic material to help identify other possible Denisovan fossils such as two unidentified skull pieces found in China in 2017.

Adding this piece to the puzzle known as the human family tree will help explain the history of the Denisovans, who are believed to have been related to the Neanderthals but split with them about 750,000 years ago. Genetic testing of older Asian cultures such as the Papuans of New Guinea show DNA from Denisovans, lending credence to the theories that they mated with Neanderthals, modern humans and at least one other unknown human species, and that they lived across Asia before becoming extinct. While the Denisovan cave in Siberia contains fossils from all three hominins, their times in the cave don’t seem to have overlapped. 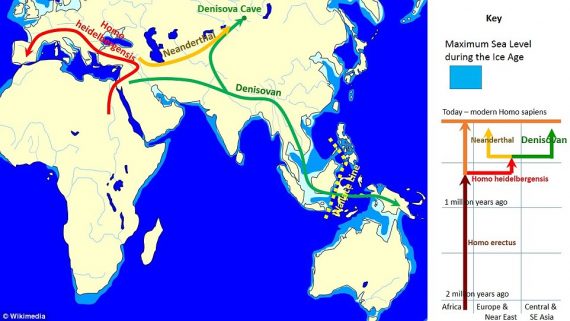 Or did they? Viola was reluctant to reveal any more information to Sapiens, deferring to his appearance at the meeting of the American Association of Physical Anthropologists and the eventual publication of his study. What else might he have found? Chris Stringer, a paleoanthropologist at the Natural History Museum in London, U.K., who will also be presenting on the Denisovans at the conference, is anxiously awaiting it.

“It’s as important in raising hopes that yet more complete material will be recovered.”

Is Viola planning a gender reveal? A missing link? A new song?

Is It Bigfoot? Mysterious Footprints In The Snow Leaves Many Wondering Who Or What Made Them