Flat Earthers Plan Trip Around Antarctica to Prove You Know What

They’re ba-ack! OK, they never left us, but you might have thought they would after Flat Earthers had their core belief system destroyed by their own leaders in an attempt to prove their pancaked planet theory with a gyroscope and instead reinforced the fact that Earth is round, round, get around, it is a-round. They obviously don’t follow Brian Wilson either, but seem to be more prone to John Belushi’s Bluto in “Animal House,” who rallied fellow frat members into action with his battle cry:

“What? Over? Did you say 'over'? Nothing is over until we decide it is! Was it over when the Germans bombed Pearl Harbor? Hell no!... It ain't over now, 'cause when the goin' gets tough, the tough get goin'. Who's with me? Let's go! Come on!..”

Well, the “tough” Flat Earthers are getting going and they’re going to … Antarctica! For those not familiar with the theory, the continent at the bottom of the planet that’s round to the rest of us is different if a globe were flattened with the North Pole in the center. Then, the outer rim would be a thin band we'd all call Antarctica. For those who know their math, that’s also called a circumference. The circumference of the round Earth is about 24,900 miles (40,000 km) but that’s around the equator and there’s still the southern hemisphere to flatten out and add to the flat map. In an interview with Forbes, flat-earther Jay Decasby, who is developing a flat earth reality series, puts the white ring of Antarctica circling such a round map at over 60,000 miles. 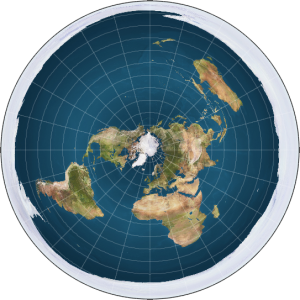 “But, but, but!” you say … didn’t Colin O’Brady just complete the first-ever solo crossing of Antarctica on a trip that took 54 days and measured 932 miles from the Atlantic Ocean to the Pacific Ocean via the South Pole? Decasby scoffs at your question.

"They’ve made laws to not allow any kind of motorized equipment on the ice which would help us prove not only flat earth but what’s beyond the ice wall, but in reality, we don’t even need to get onto the ice to prove flat earth.”

That’s right. He claims the best way to prove the Earth is flat is to sail a ship around the circumference of Antarctica which should be 60,000 miles. Such a trip would also prove that the edge of the Earth is circled by a wall of ice 150 feet high. Captain James Cook did this first, although that claim is obviously disputed by flat earthers like Decasby who says there’s no way Cook sailed 60,000 miles (did you catch the flaw in this logic?), but still quotes Cook’s description of a high wall of ice in which the captain was never able to find an inlet that penetrated it. Never mind that Antarctica has since been circled many times and many inlets have been found.

Jules Verne’s Phileas Fogg strove to go around the world in 80 days. Viking Ocean Cruises is offering an Ultimate World Cruise that will circumnavigate the Earth and visit 59 countries in 245 days (for the low, low price of $93,000). Why not, in the name of science or the debunking of science, let these flat earth believers finance and sail a ship around Antarctica and prove their theory to the “the sun-worshipping cult of heliocentrism" or forever hold their peace?

Entertainment could be provided by bands singing flat versions of "I Get Around," "Roundabout" and "Fat-Bottomed Girls (You Make the Rockin' World Go Round)." The challenge will be to find a cruse ship with a big enough galley to stock a buffet for 60,000 miles. What would Bluto say?