Goal! Of Death: The Strange Story of the Cursed Soccer Player

For those readers in the United States, many might not realize just what a global phenomenon the sport of soccer is (or football, as most people know it). It is perhaps the most popular sport in the world, with billions of adoring fans who watch every game and detail, with many players becoming wildly famous in areas of the world where this sport has become almost a religion rather than a game. And as with anything this entrenched within the popular consciousness, soccer, football, whatever you want to call it has attracted its share of strange stories and legends. Perhaps one of the weirdest is the tale of a football player who according to popular belief has the ability to cause death just by scoring goals.

The whole odd story revolves around one Aaron James Ramsey, a Welsh professional soccer player (or footballer, as you like), who currently plays as a midfielder for Premier League club Arsenal and the Wales national team, and also represented Great Britain at the 2012 Olympics (yes, you non-soccer watching people, er, football? It is an Olympic sport). He has become a rather well-known figure in the sport, despite sidelines along the way such as a broken leg in 2010, and he continues to be an important player for any team he is on, but he is also known for the rather sinister curse that seems to gravitate around him.

The whole phenomenon now known as “The Ramsey Effect,” “The Ramsey Curse,” and the “The Rambo Effect,” began to take shape in 2012, and basically follows the idea that every time Ramsey plays a game in which he scores a goal, someone famous or otherwise well-known dies. This was first really noticed by eagle-eyed fans when they realized that for every one of the four goals scored by Ramsey for Arsenal F.C. during the 2011-2012 season some celebrity met their doom in one form or another, and it has only grown from there, with fans continuously adding new examples of victims of “the curse.”

It may seem ludicrous to think that a goal in soccer should be linked to someone’s death, but the list is actually fairly long and growing, actually tracked back to 2009, just after Ramsey joined Arsenal in 2008. In August of 2009, U.S. Senator Ted Kennedy died of cancer just 3 days after Ramsey played a match against Portsmouth in which he scored. After this, Ramsey broke his leg, and was out of the game until 2011, after which the curse continued when he played in a major game against the team Manchester United at the Emirates stadium on May 1, 2011, during which he scored a goal. The very next day the terrorist Osama Bin Laden was killed by U.S. Special Forces in Pakistan. On October 2, 2011, Ramsey played a game against Tottenham Hotspur at White Hart Lane, and three days later Apple founder Steve Jobs died after a long, hard battle with pancreatic cancer. That same year on October 19th, Ramsey scored a goal in a game against Marseille during a Champions League game, and the next day Libyan leader Muammar Gaddafi was captured and killed by Libyan rebels near his home town.

Moving into February of 2012, on the 11th Ramsey scored a goal in a game against Sunderland A.F.C., and that same day the beloved, world famous pop singer Whitney Houston was found dead in a Los Angeles bathroom. With this death, people began to notice a pattern where there had been none before, in that these were all happening within days of Ramsey scoring a goal, and it was picked up by social media, mainstream news outlets such as The Telegraph, and debated and discussed, and it would continue on, earning him the rather morbid name “The Grim Reaper of Soccer.”

On March 21 of 2013, Ramsey scored a goal and the next day both basketball player Ray Williams and Russian oligarch Boris Berezovsky died, the former from colon cancer and the latter from hanging himself. On November 30, 2013, Ramsey struck again, scoring two goals against Cardiff, after which Fast and the Furious actor Paul Walker died in a tragic car accident on that very same day. In August of that same year, on the 10th Ramsey scored against Manchester City, and the next day the mega-famous American comedian and actor Robin Williams died at his home in California. Coincidence? 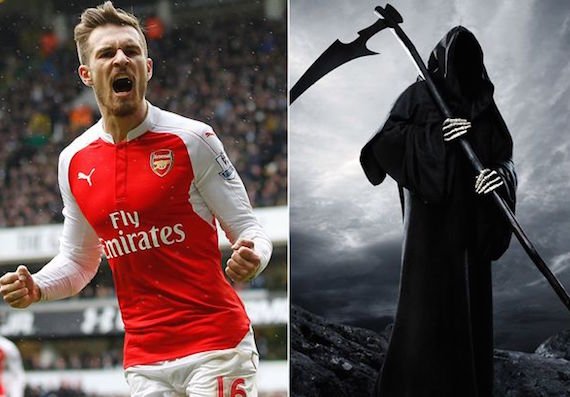 After that things went quiet for awhile, until 2016, when the sinister curse apparently raised its head again. On January 9th of that year Ramsey scored against Sunderland and rock legend David Bowie died the next day from liver cancer. Not even a week later, on January 13th, Ramsey scored against Liverpool, and the following day the legendary actor Alan Rickman died from pancreatic cancer. On March 5 the ominous curse continued, when a goal was scored by the player against Tottenham, followed by the death of former U.S. first lady Nancy Reagan. When the soccer season started up again in 2017, the British presenter, actor, comedian, singer, dancer, and screenwriter Bruce Forsythe died of bronchial pneumonia following a goal, and 2018 saw the deaths of Ken Dodd, physicist Stephen Hawking, and world champion pro darts player Eric Bristow, all following Ramsey games in which the player scored.

And the list keeps getting longer. All things told, at least 16 famous or infamous people and counting have died either on the same day or within days of one of Ramsey’s goals, and for some it is just more than coincidence, propelling the “Ramsey Curse” into full urban legend status. But is there anything to it all? Of course most skeptics would say that this is obviously just pure coincidence that has, for whatever reasons, been picked up on by fans, connected to Ramsey, and fueled by rampant social media chatter and news coverage. After all, you can probably take any player of any sport and find someone who has died whenever they score in a game if you really look. Then confirmation bias takes over, with people ignoring all of the goals where no one died, and it takes on a life of its own. As far as Ramsey himself is concerned, he obviously takes it all in stride, and sees it as a bit absurd, saying:

The most ridiculous rumour I’ve heard is that people die after I score. There have been loads of occasions where I’ve scored and somebody has died. That’s just a crazy rumour. I didn’t really find it funny. Although I took out some baddies!

As with any alleged curse, we face the same problems. Is this just random coincidence that has gelled into something more sinister? Is there something paranormal going on here or is this all in the heads of those who believe? Whatever the case may be, whether you are a soccer (or football) fan or not, you might want to keep your eye on the news the next time Ramsey scores a goal. Just in case.

*UPDATE- Ramsey scored a goal the weekend before actor Luke Perry died of a massive stroke.