This April will see the theatrical release of Hail Satan?, Penny Lane’s acclaimed documentary about the social and political justice efforts of the Satanic Temple. Now, Magnolia Pictures has dropped its first trailer…

Hail Satan? Sets out to challenge popular assumptions about modern Satanism and presents the Satanic Temple as equal parts religion and social activist group (it was founded only six years ago) trying to make its voice heard in the politically charged climate of modern America.

When media-savvy members of the Satanic Temple organize a series of public actions designed to advocate for religious freedom and challenge corrupt authority, they prove that with little more than a clever idea, a mischievous sense of humor, and a few rebellious friends, you can speak truth to power in some truly profound ways. As charming and funny as it is thought-provoking, Hail Satan? offers a timely look at a group of often misunderstood outsiders whose unwavering commitment to social and political justice has empowered thousands of people around the world.

Co-founded in 2013 by Lucien Greaves and Malcolm Jarry, the Satanic Temple was in the media spotlight late last year as it announced it was attempting to sue Netflix and Warner Bros. for copyright infringement to the tune of $50,000,000. The Temple pointed out that the statue featured in the Netflix show Chilling Adventures of Sabrina was almost identical to that used by the Satanic Temple, which, believe it or not, holds copyright on the image. An amicable settlement was ultimately reached. Greaves called Sabrina “asinine Satanic Panic” in reference to the hysteria about satanic ritual abuse in the 1970s and 1980s, which ultimately led nowhere. 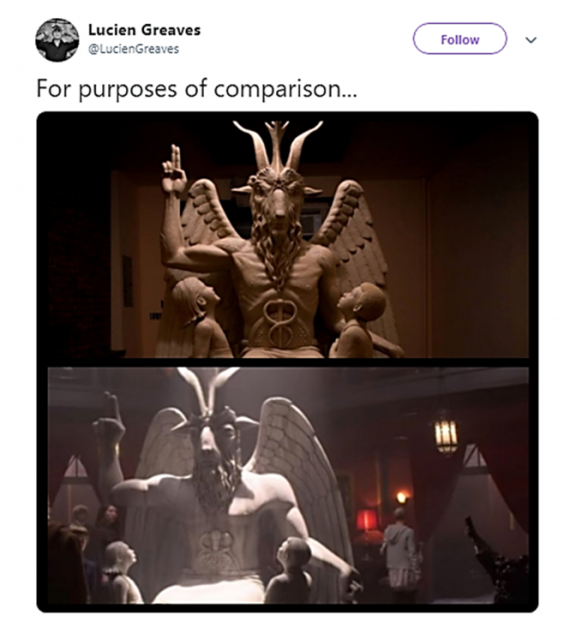 The Satanic Temple sees itself as separate and distinct from LaVeyan Satanists, and feels that its principles and tenets represent “a natural evolution in Satanic thought.” The mission of The Satanic Temple, according to its website, is to “encourage benevolence and empathy among all people, reject tyrannical authority, advocate practical common sense and justice, and be directed by the human conscience to undertake noble pursuits guided by the individual will.”

Hail Satan? Has received excellent early reviews. Variety's Amy Nicholson observes that the documentary "sets out to subvert American history with intelligence and wit [and] asks us to question why certain religions are deemed 'normal,' even though, notes one Temple member, Catholic mass is all about the symbolic drinking of blood."

Meanwhile, at The Hollywood Reporter, Leslie Felperin describes Hail Satan? as a "wickedly funny, fascinating crowd-pleaser." Indeed, the general consensus at present is that the movie is nothing if not smart and very, very funny. Still, there can be little doubt that Hail Satan? will draw fierce criticism from Christian organisations when it hits theatres on April 19, 2019.