Bad news for Loch Ness Monster fans … two Loch Ness Monster experts (I know, skeptics say that’s an oxymoron) are casting doubts on the three sightings this year, including two in just five days, that put 2019 on pace to be a record-breaking year for Nessie views. Is this dispute scientific, paranormal, political or just plain spite? Or could it be soul-searching, as both experts seem to be questioning their own existence?

“The fact is that well over a thousand honest and sober people have seen monsters in Loch Ness. Yet over 80 years of expeditions have failed to find them. Either we’re fairly bad at what we do or there’s another reason for that. I think it’s fair to say we’d all like there to be a Loch Ness monster. But equally there are people who will see what they want to see.”

It’s tough to find someone who has devoted more of their life to finding the Loch Ness Monster than Adrian Shine. He’s been looking for it since 1973 and is currently the Loch Ness and Morar Project and the possessor of a giant beard long before ZZ Top or David Letterman. In 1987, he organized "Operation Deepscan” which used 24 boats equipped with echosounder sonar to search the entire loch. Needless to say, no monster was found by Operation Deepscan, but Shine has never been deterred in in his search. However, the first three sightings of 2019 don’t float his Loch Ness boat.

“In fact the huge majority of sightings are caused by the illusions that the loch is capable of creating, precisely because of the monster legends.”

So, what does Adrian think these sightings might be?

“My best guess is that what people are seeing is a fish like a sturgeon, which is very primitive and reptilian in appearance and can grow very big.” 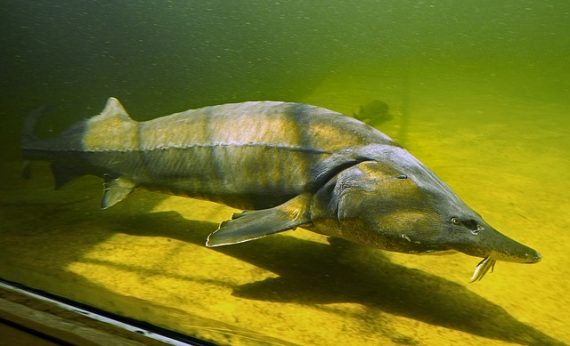 Anyone who’s ever researched the Loch Ness Monster knows the name Steve Feltham. The self-proclaimed Nessie Hunter has been living in a converted van on the shore of the loch since 1991, searching daily for Nessie and reviewing photos and videos taken by others. He is, or at least was, far more enthusiastic about the existence of the creature than Adrian Shine.

“When I arrived here full-time nearly 30 years ago I was looking for plesiosaurus, those dinosaurs with long necks. But now I’m not looking for dinosaurs, I’ve ruled that out, which is disappointing for me as I’ve had a lifelong fascination with Nessie. There are people out there who are incredibly gullible and believe every picture they see and bit of evidence. The internet has made it very easy for people to upload photos and cause a Nessie sensation with many believing it really is Nessie until proven otherwise. Every day there are many two or three decent interesting photographs, bit of films or pieces of evidence to study, but there are 10 times as many false alarms.”

So, what does cynical Steve think the three sightings of 2019 might be?

“My favourite is the wels catfish, the second-biggest freshwater fish in the world, although we’re no where nearer to saying it is definitely this or that. It doesn’t mean that it will turn out to be a catfish, but it’s my best guess at the moment.”

A sturgeon or a catfish? While Shine and Feltham seem to have resigned themselves to these ideas, they will surely disappoint the businesses dependent on the search for an actual monster. These two legendary Loch Ness Monster experts both hope that the results of the DNA testing of the loch last year, if and when they’re finally released, will solve the myth, or at least push the needle closer to an answer.

Photo Captures Mysterious Lights In The Waters Of Northern Ireland