Before we begin, I think we can all agree that Rats on Psychedelics would be a great name for a band … and that real rats on psychedelics would probably make better music than half the bands working today. That being said, a new study testing rats on microdoses of psychedelics may not reveal what kind of music they’d play (Pink Floyd cover band?) but uncovered some interesting results for those considering a jump onto the microdosing bandwagon (where legal, of course).

"This is the first time anyone has demonstrated in animals that psychedelic microdosing might actually have some beneficial effects, particularly for depression or anxiety.”

That’s the good news from David Olson, assistant professor in the UC Davis departments of Chemistry and of Biochemistry and Molecular Medicine, who led the study published this week in Chemical Neuroscience and reported in Science Daily. Olsen and his team microdosed male and female rats with DMT (N,N-dimethyltryptamine), the main psychoactive component in the hallucinogenic beverage ayahuasca. DMT was often called the "businessman's trip" because it kicked in much faster than LSD or psilocybin mushrooms. It was used for this study because research has shown that it affects rats and people the same way in the areas of mood, cognitive function, and anxiety. DMT is also an element of LSD and psilocybin at the molecular level, so results would be the same with those drugs.

The rats were young and of the same age and were given one-tenth of a human dose of DMT (since there’s no official measure for a microdose) every three days. After two weeks, their anxiety, sociability and cognitive functions were tested, using exercises like the “forced swim test” where the rats were placed in a vat of deep water and … well, you read the name. While rats with high anxiety normally just give up and float or sink, those on a microdose attempted to swim – thus confirming in a limited test the benefit of psychedelic drugs for treating anxiety disorders like post-traumatic stress.

That’s the good news. The researchers also found that DMT did nothing for the rats’ cognitive function and sociability – two areas where LSD microdosing has helped humans. Even worse, the microdoses caused male rats to gain weight and females to unexpectedly develop neuronal atrophy – a loss of neurons and their connections in the brain which results in a decrease in conscious thought and voluntary body processes. If you think that all sounds bad, Olsen agrees with you.

"It's exciting, but the potentially adverse changes in neuronal structure and metabolism that we observe emphasize the need for additional studies." 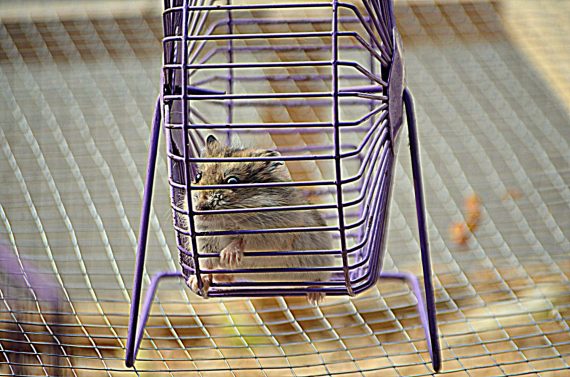 The neural atrophy appears to be linked directly to microdosing, since Olsen’s team found that a single high dose of DMT had the opposite effect of causing neuronal growth. And, in case you’re wondering, the researchers were able to separate the therapeutic benefits of DMT from its hallucinogenic properties (not to mention the vomiting and diarrhea caused by ayahuasca tea), so the rats were still able to function in the rat race without drawing suspicious looks from their managers.

The good news is, more testing will be done. In the meantime, Rats on Psychedelics will probably be opening soon for a Jefferson Airplane cover band.