When playing a game of “What’s the weirdest thing you can imagine happening” (don’t tell me I and my friends are the only ones who play this), it pays to google your crazy idea first because 9 times out of 10, it already happened in Siberia or somewhere else in Russia (this isn’t cheating, according to the official rule book). Black snow? Check. Green snow? Check. Black living snow? No need to google it … we already did and it’s true. Plausible explanation? Safe for humans? Something sinister behind their appearance? Let the game continue!

This story comes from the village of Balasheika (or Balasheyka) in the Samara region, a heavily-populated urban area in the southeastern part of Russia at the convergence of the Volga and Samara rivers near the border with Kazakhstan (in case you want to go and see this for yourself). According to Pravda.Ru, residents of Balasheika awoke on the morning of March 12 to see that everything outside looked to be covered with a black snowfall. Fearing it was caused by coal pollution like the black snowfall in multiple places this winter across Russia (some being so embarrassing that local officials painted it white – only in Russia!) and worried their children would run out and taste it, parents went out to inspect it and were confronted with a nightmarish scene far worse ... the black snow appeared to be alive and moving! (Watch the video here.)

Upon closer inspection, they saw that the movement was caused by a blanket of insects they assumed had fallen from the sky in the previous night’s snowfall. While waiting for an official answer (or for someone to google it), they assumed the tiny bugs were blown in from Kazakhstan (it’s always Kazakhstan) during recent heavy “cyclonic” winds. Before you use this in your next game of “What’s the weirdest thing?", that’s the wrong answer.

“These creatures are known as Collembola springtail insects, and they do not fall down from the sky. They crawl from under the ground to the surface, and they will return there as soon as it gets warmer.”

Actually, they’re more commonly called “snow fleas,” which is a misnomer since they’re neither fleas nor snow nor even insects. Collembola are hexapods that are not considered to be insects because they have internal mouthparts. They’re omnivorous, free-living organisms that prefer moist conditions and are named Collembola for their collophore (a straw-like body tube used for excretion and maintaining water balance) and their abdominal, spring-like furcula that is used for jumping when threatened. They generally live in decaying matter and one of the world’s most abundant tiny creatures, with about 100,000 per square meter of ground. Even in those numbers, their minute size, while visible to the naked eye, still makes them hard to see … except for the snow fleas, which sometimes emerge from winter hibernation when the temperature is warm enough to trick them into thinking it’s spring but not enough to melt the snow, giving the contrast that makes them easy to spot.

“These insects are absolutely safe for humans, domestic animals and grain crops. They may emerge on the ground surface too early, when it gets unusually warm for a few days.”

Pravda.Ru knows what its readers are thinking. Being wrongly called “fleas” makes Collembola springtails subject to the same fears of fleas, which truly deserve to be feared and avoided by warm-blooded creature. However, Collembola springtails are truly harmless and in fact are beneficial as lab test subjects for the early detection of soil pollution. 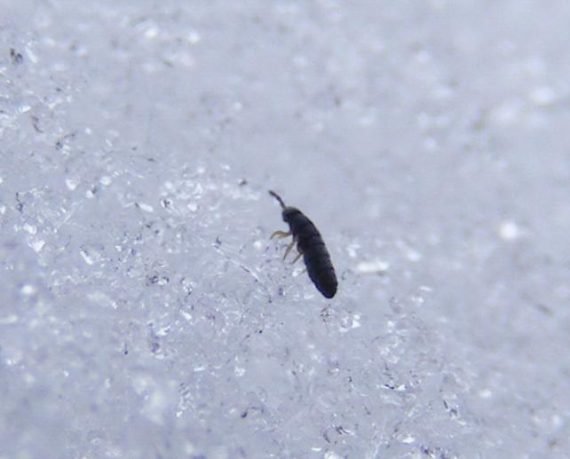 Conspiracy theorists may also know of Collembola springtails for their alleged use as biological weapons during the Korean War. They were rumored to have been infected by the U.S. military with anthrax, dysentery, cholera and small pox and dropped by airplanes on enemy villages. The rumors surfaced again in 1971-72 when the Nixon administration ordered all biological weapons stored at the Pine Bluff Arsenal in Arkansas to be destroyed. The government denied snow fleas were ever used as six-legged biological weapons carriers.

Were they? Are they? Should the good folks of Balasheika be fearful of the sudden appearance of huge numbers of snow fleas? Should they question their government? Our? Anybody’s?

It’s too bad we can’t ask the bugs.