Pieces of Mummies are Missing in Egypt and Ireland

Let’s get two things out of the way right up front. First, Pieces of Mummies would make a great name for a band. Second, despite how they are portrayed in many horror movies, pieces of mummies are the remains of living beings and should be treated with respect and dignity, regardless of their historical significance or possible alien origin. Despite that, there continues to be a thriving underground market for them that recently came above ground in Cairo and Ireland. Ireland?

This week, Egypt's Ministry of Antiquities announced that security officials at the Cairo International Airport discovered a collection of parts from two Egyptian mummies -- a torso portion, an arm, part of a left hand, two legs and two feet – hidden inside a pair of stereo speakers that were being shipped to an address in Belgium. The security officers are part of a special archaeological unit assigned exclusively to the Cairo airport to search for and confiscate stolen antiquities, which are considered to be property of the state and, under the 1983 Egyptian Law on the Protection of Antiquities, cannot be owned by private individuals. That includes mummies – both of humans and animals. The penalty is a fine and up to two years in prison. And yet … U.S. Census Bureau documents show that an estimated $50 million worth of artifacts and antiques were illegally shipped from both Egypt and Turkey to the United States in 2016 alone. As of this writing, the identity of the thief and smuggler has not yet been released.

A stranger tale of mummy parts comes from a place not known for mummies – Ireland. The Church of Ireland announced that St. Michan’s Church on Church Street in Dublin was burglarized on February 25th and the vandals broke into crypt and stole the head of an 800 year old mummy known as ‘The Crusader’. Other mummies in the crypt, including the 400-year-old remains of a nun, were desecrated, but only the head of The Crusader was removed, according to the Rev. David Pierpoint, the vicar of St. Michan’s and archdeacon of Dublin.

“His legs were pushed up into his torso, his arms were moved to one side and his head has been decapitated. His head is gone.”

Ireland may not be known for mummies, but St. Michan’s is an exception. Dating back to 1095, the church has an interesting and important history. First used by Vikings who had been kicked out of the rest of Ireland, it was rebuilt in 1686 and a large pipe organ was installed in 1724, which allegedly was where Handel first played the Messiah. The basement crypt contains a number of mysteriously well-preserved mummies that have outlasted the wooden caskets they were laid to rest in. Theories on why they don’t deteriorate range from the dry limestone walls to methane leaking from the ancient swampland it was built on. While the identities of the mummies aren’t known, four have been given nicknames – the “unknown,” the “nun,” the “thief” (missing hand may have been cut off as punishment) and the “Crusader.” 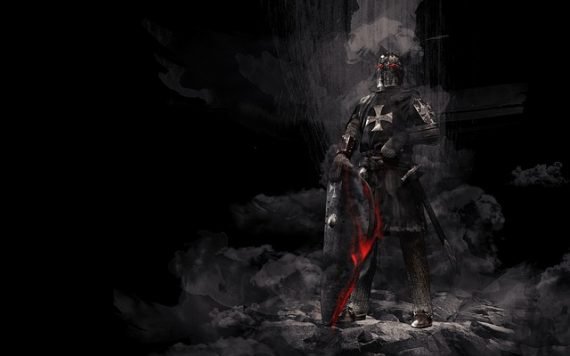 Measuring 6-foot-5-inches, the Crusader is believed to have been a giant soldier in what would have been the Fourth Crusade (1202–1204). While he was tall, his casket was small and his legs were broken to fit it. Being a popular tourist spot, the crypt has long been open to the public and visitors were once allowed to shake the Crusader’s mummified hand. This creepy practice may have inspired Bram Stoker, who visited there as a pre-Dracula young man. That won’t be happening for a while, says Reverend Pierpoint, who wants any information on the crime turned over to the local police.

“The actions of these people are devastating and sacrilegious. We are upset at the amount of damage that has been caused. But also the crypt will have to close so tourists will not be able to visit. It is very frustrating.”

Not to mention shameful that there are people who would steal these mummified remains and others who would pay for them. This wasn’t the first time St. Michan’s has been vandalized and we know Egypt’s long and sordid history of stolen antiquities.

Let’s have a moratorium on using Pieces of Mummies as a band name until this practice finally ends.

The Mandela Effect and Geography